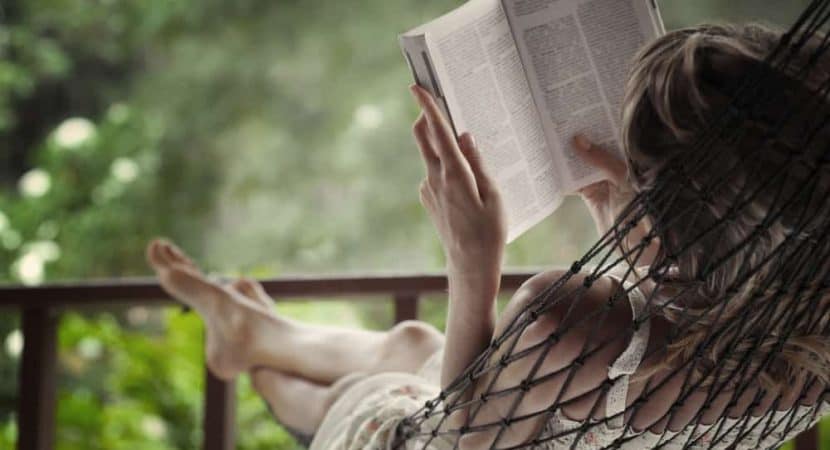 I try to recall the day that I first found Banana Yoshimoto, and the memory is shrouded in an aggravating haze. I must have been in my early college days, browsing the fiction section (the end of it, no doubt, where all the other Y-named authors reside), when the image of a young Japanese girl in a white dress staring out at me caught my attention.

“Kitchen,” the title read in dark bold font, set against a bright green and orange background. Confused, I wondered if the book had been displaced from the cooking section by someone too lazy to put it back where it belonged.

Fortunately, the book and the woman behind its story were exactly in the right place.

I don’t overstate things when I say that Yoshimoto’s books changed my viewpoint of the world. Or maybe, it’s more accurate to say that her books brought my view of the world into sharper focus.

Her narrators, typically young women in their 20’s or 30’s, were people I found myself relating to in a way I’d never quite been able to before, fictional or real. They were often living quiet, slow-paced lives in peaceful neighborhoods around contemporary, urban Japan (as calm and laid back as any suburb around where I grew up in Michigan).

While her contemporary, Haruki Murakami, often writes freely with a sense of surrealism that requires a bit of disbelief suspension, Yoshimoto is a welcome respite—a comfortable and familiar sense of reality I’m able to slip into as easily as an old, oversized sweater.

In her books, there is a familiarity with the issues, the family members, and even the boyfriends that Yoshimoto writes about. I grew up around all of them—just on the other side of the world. There is such glorious normalcy and reality in Yoshimoto’s worlds, even when narrators’ lives turn dreamlike while dealing with anguish and depression, then eventually finding their way back to joy, thriving within reality.

For those who have yet to dive into the world of Banana Yoshimoto (you lucky creatures), I’d like to share which of her books that I found resonated with me the most to help you begin your journey into her world. For those of you who are already familiar with Yoshimoto’s stories, what does a little trip down memory lane ever hurt? 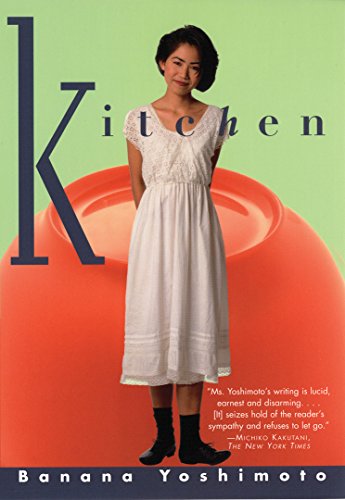 “The place I like best in this world is the kitchen. No matter where it is, no matter what kind, if it’s a kitchen, if it’s a place where they make food, it’s fine with me. Ideally, it should be well broken in. Lots of tea towels, dry and immaculate. White tile catching the light (ting! ting!). ”

I was hooked from those opening lines.

Kitchen, the novel that brought Yoshimoto fame in Japan and abroad in the late 1980s, has stuck with me throughout the years. It’s the book I’ve re-read the most in my life (and as the list of books I’d like to read is endless and my time is not, I don’t re-read books too often).

The story of Kitchen follows a young, college-aged girl, Mikage Sakurai, an orphan raised by her grandmother who has just passed away. At the start of the book, Mikage is reeling from the loss of her last remaining relatives, and now finds herself completely alone in the world. She lays on the kitchen floor day and night, willing the hum of the refrigerator to distract her from her isolation and to soothe her to sleep, possibly oblivion.

Eventually, Mikage is pulled out of her stupor and is taken in by her friend, Yuichi, and his lively, beautiful mother Eriko (who is actually Yuichi’s father-turned-mother, a story within the story). They provide her with a sense of family and warmth she’d been missing since losing her grandmother, and with every meal made in the kitchen and every conversation shared, her heart begins to thaw.

I return to this book over and over for the pleasure of the characters’ company. The love and strength of their relationships with each other propel Mikage into finding her passion for living again, warming me in a way few other books have.

I’ll leave the tragic circumstance that pivots the story for you to discover on your own if you haven’t read it yet. Needless to say, Yoshimoto confronts the heartache and the hopefulness of life head-on in a way you’re likely to end up craving more of. 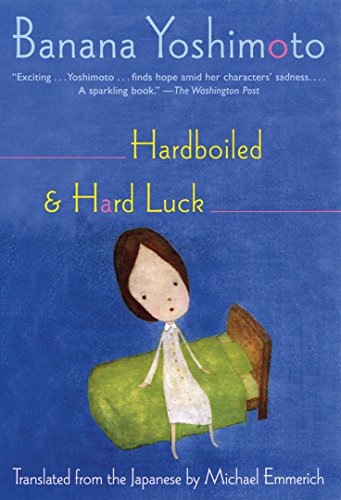 It’s astounding how deftly Yoshimoto crafts such satisfyingly moving stories in such a short span of time—the markings, I believe, of a truly great storyteller. She does just that in this book, which consists of two different stories: Hardboiled and Hard Luck.

While both are completely separate in plot from one another, Hardboiled and Hard Luck are like two rivers running parallel, both pushed on by tragic circumstances, weaving their paths as the narrators come to terms with painful, inward struggles.

Hardboiled (one of my all-time favorite Yoshimoto stories) reads like a sad ghost tale, best read at night. An unnamed narrator wanders a mountain town on the anniversary of the death of her former girlfriend, Chizuru, who died in a fire shortly after they separated. Strange, eerie events unfold throughout the night during her stay at a local inn, including a meeting with Chizuru in a dream.

The narrator is forced to come to terms with the fact that she unintentionally inflicted deep emotional damage on Chizuru before she died, an act that’s formed a hard, immovable shell around her heart. Unable to sleep and with strange things continuing to occur throughout the long night, she seeks consolation with the innkeeper, who tells her:

“Listen, I understand what you’re saying. This is a strange day…Somehow the air feels heavy, and the night is darker than usual. But you know what? It will pass. Even nights like this come to an end.”

Who among us hasn’t had strange, sleepless nights, our hearts tight in our chests?

In Hard Luck, the shorter story of the two, the narrator’s sister Kuni lay dying in a coma. The narrator knows her sister’s death is approaching, but struggles to accept the idea of a life without her. Her sister’s fiance’s brother, Sakai, befriends her and ends up accompanying the narrator on her journey through long days and nights as she grapples with her grief.

Despite these somber plots, the stories do not leave you deflated. They lend themselves to the idea that sorrow can be a path to a renewed appreciation for being alive, a theme Yoshimoto often explores. Her characters almost always at some point swing from complete hopelessness one moment to determined hopefulness the next—a trait I find delightfully human and relatable.

Like many of her books, this one is especially recommended if you’ve ever experienced losing someone you loved—an event that never quite leaves you—as it offers a touching, optimistic lens through which to view loss. 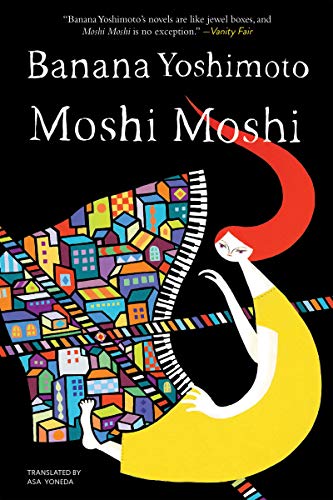 Yoshimoto’s book most recently published in English, Moshi, Moshi slowly and quietly burrowed its way deep into my heart.

It tells the story of Yoshie, a young woman who, when we meet her, has fled her childhood home in Meguro, Tokyo to the hip, residential neighborhood of Shimokitazawa. It’s been about a year since her dad was killed in a murder-suicide, carried out by an unknown, distant relative of the family and whom he’d been having an affair with. She was a depressed woman who’d become desperate and had decided to end it all, taking Yoshie’s father with her.

Yoshie’s mother eventually leaves their family condo as well, landing at her daughter’s doorstep. Together, they try to find their way through their confused grief (neither had known about the mistress, and the father had been so seemingly devoted to his family).

Yoshie takes on a job at the local bistro, throwing herself into working with food, but is unable to shake the fact that at night, she dreams of her father who tries to connect with her to tell her something important that she can’t yet make out.

The rest of the book follows Yoshie and her mother as they attempt to slowly rebuild their lives while deciphering who the man was that they thought they knew ( “a hologram projected between us, showing us each a different image”).

For me, this was a strong callback to Kitchen. Like in the novel that first put Yoshimoto on the world stage, Moshi, Moshi centralizes on a young woman who uses food and time spent in the kitchen as a means of healing herself. The strengthened relationships that are borne out of shared suffering between people, as well, echoes across the years from Kitchen to Moshi, Moshi.

Once more, despite the solemn storyline we’re presented with at the start of the book, Moshi, Moshi, like its central characters, somehow finds its way through the dark and emerges with a warm, hopeful light.

Through her books, it feels as if Banana Yoshimoto is telling her readers, I know what it is to suffer—so many things can be confusing, but let me help you to understand. Especially for those still in their tender teens and twenties, like I was when I stumbled upon her that day in the bookstore, her characters’ thoughts form so poignantly, pinning down emotions that can be so hard to describe.

As Yoshie says in Moshi, Moshi:

“What a comfort it was, I thought, to hear someone put into words something that you were on the verge of grasping.”

What a comfort, what a gift.

Are you a fan of Banana Yoshimoto’s? Do you have any favorites or recommendations? Share with us in the comments below!