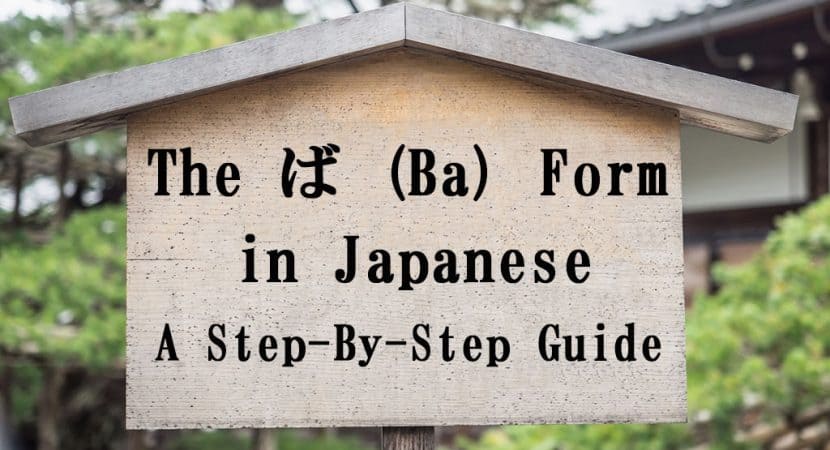 The ば (Ba) Form and Verbs

Using the ば-form with verbs is very common, so let’s look at it first. If you are unfamiliar with verbs in Japanese, there are three categories: る (ru)-verbs, う (u)-verbs, and irregular verbs. They are also called group 2, group 1, and group 3 verbs, respectively. This is important to remember, as each category follows different rules when conjugating into the ば-form.

る (ru)-verbs, or group 2 verbs are considered the easiest verbs to conjugate. る-verbs are those that end with the hiragana る, which is preceded by a hiragana with the え (e) or い (i) vowel sound.

る-verbs can be conjugated into the ば-form by replacing the る at the end of the verb with れば (reba).

*Note:  While the translation says “I/you,” other pronouns would work, depending on the sentence (he, she, they, someone, John, etc.)

う-verbs differ from る-verbs in conjugation slightly; each う-verb is conjugated by changing the last hiragana to the character in the 4th row of the hiragana chart and then adding ば at the end.

As previously mentioned, the dictionary form (3rd row of hiragana chart) of う-verbs all end in the vowel sound “う” (う、く、す、む、つ、る、etc.). Changing this to the 4th row will make all the characters end with the vowel sound “え” (え、け、せ、め、て、れ, etc.).

Take a look at the following list of う-verb conjugations for some clear examples.

Here are a couple of these う-verbs in example sentences to give you an idea of how they work.

1. セール中だから今買えば、お得だよ。
(Sēru chū dakara ima kaeba, otoku da yo.)
They are having a sale, so you’ll be getting a great deal if you buy it now.

Last in the verbs are the irregular or group 3 verbs, which don’t follow any previous pattern. Each of these verbs must be memorized on their own, but thankfully there are only two of them in Japanese. The two Japanese irregular verbs are:

する and 来る are easy to memorize when it comes to the ば form because they behave like る verbs for this conjugation. Simply change the final “る” to “れ” and add ば at the end.

2. 朝早く来れば田中さんに会えますよ。
(Asa hayaku kureba Tanaka san ni aemasu yo.)
You can meet Tanaka san if you come early in the morning.

The ば Form and Adjectives

Using the ば-form with な-adjectives is actually a little tricky. Japanese students learn the conjunction “であれば (de areba),” which is correct (taught further down below). However, technically speaking, some native Japanese speakers feel that the true ば-form of な-adjectives is to use the conditional なら (nara).

To turn a な-adjective into its conditional form, all you need to do is take any な-adjective (without the “な”) and add なら after it:

**Note: You could also add ば to the end of なら to form ならば (naraba), which is another way to turn a な-adjective.

It is said that なら originally came from ならば. Because of this, ならば sounds like an old expression that is not used often anymore. You will most likely encounter it in formal writing.

For な-adjectives, the conjugation is a little more complicated, as it doesn’t involve conjugating the adjective directly, but instead combines it with the verb ある (aru), or “to be.” ある is conjugated by changing the final “る (ru)” to “れ (re)” and adding ば. Then you’ll replace the “な” with the conjunction で (de) and combining it with あれば –> であれば (de areba)

***Note:  ある (aru) is technically a う/group 1-verb, but the way you conjugate this verb is an exception. That’s why with the ば-form it’s not あえば (aeba), which would be how a normal う-verb is conjugated. Instead, it becomes あれば (areba).

While using であれば to conjugate な-adjectives into their conditional form is okay, the use of なら (explained above) is more natural and suited for both conversation and writing. であれば is usually only used for formal writing like research documents.

The following two example sentences use the ば-form of adjectives to show just how to use them in practice. However , keep in mind that usually the であれば-form is used only in formal writing.

1. 今年の冬が寒ければ、新しい上着を買いたい。
(Kotoshi no fuyu ga samukereba, atarashii uwagi o kaitai.)
If the winter this year is cold, I want to buy a new jacket.

2. 明日行くレストランのスタッフが丁寧であれば、****また予約しましょう。
(Ashita iku resutoran no sutaffu ga teinei de areba, mata yoyaku shimashō.)
If the staff at the restaurant to which we go tomorrow are polite, let’s make a reservation again.

****Note: Did you notice that example #2 was a casual sentence (probably said between friends or family)? If you did, great job! In this case, replace the formal 丁寧であれば (teinei de areba) with the more conversational 丁寧なら (teinei nara) would be a much better choice.

Other Uses of the ば-Form

All of the above examples of the ば-form are in the polite present tense, but it is possible to use this form with negative and past tenses too.

ば (Ba) With the Negative Form

To use the ば-form in a negative context, take the casual negative form of the verb, which ends in ない (nai), and change the “い” to “ければ.”  This will give it the meaning of “If you don’t ~.”

*****Note:  While the translation says “I/you,” other pronouns would work, depending on the sentence (he, she, they, someone, John, etc.).

ば-Form in the Past Tense: Reflecting On the Past

When you do this (using the ば-form followed by a verb or adjective in the past tense), the nuance of this sentence becomes similar to “I should have ~.” or “I would/wouldn’t have ~.” in English.

1. 真実を知っていれば彼女と話しました。
(Shinjitsu o shitteireba kanojo to hanashimashita.)
I would have talked with her if I had known the truth.

You can also create a past negative sentence as well:

1. 通勤に便利なら / であれば、あのアパートに住みたかった。
(Tsūkin ni benri nara / de areba, ano apāto ni sumitakatta.)
If it was more convenient to commute, I would have lived in that apartment.

Special Phrases that Use the ば-Form

While the ば-form is used as an “if” statement in general, there are cases where its meaning differs slightly. These common grammar points are valuable tools and thus worth remembering.

A very useful phrase is “すればするほど (sureba suru hodo),” which means “the more X, the more Y.” This phrase is used by inserting the same verb or adjective twice, once in the ば-form and once in the present tense followed by ほど (hodo).

The next phrase is “すればいい (sureba ii).” This phrase uses the adjective いい, which means good; this phrase is often used as a “should” phrase or a suggestion.

In addition, you can use this phrase with the past tense of いい, which is よかった (yokatta). This changes the phrase’s meaning slightly into “should have,” which is often used as a statement of regret or desire for a different outcome.

In Japanese, there are many ways to express an if statement. Some of the most common ways use either the ば-form, the たら-form, or the と particle. What’s the difference between these and the ば-form? Let’s take a look.

The ば-form is often used for hypothetical situations or desires that may or may not come true in the future. In other words, the ば-form is used for if statements that are far off or abstract.

The たら (tara)-form, on the other hand, is used for “if-then” situations. If X happens, then Y. たら can also mean “when” as in “when I went to Disneyland, I saw Mike.” Let’s take a look at some examples.

The たら form is mainly used for conversations.

1. 東京に行ったらスカイツリーに行ってみたい。
(Tokyo ni ittara Sukaiturī ni itte mitai.)
If I go to Tokyo, I’d like to go to Skytree.

Last, the と particle is used for if statements that will always end with the same result. If this X happens, then Y will surely happen. A common use of this form is when giving directions (example 1).

1. 橋を渡ると学校が右に見える。
(Hashi o wataru to gakkō ga migi ni mieru.)
If you cross the bridge, you can see the school on your right.

2. あの家を通り過ぎると、家の中にいる犬が吠える。
(Ano ie o tōri sugiru to, ie no naka ni iru inu ga hoeru.)
Whenever I pass that house, the dog that is inside will bark.

Knowing how to use the ば-form and conjugation methods for verbs and adjectives makes if statements and other uses of this form a breeze in conversation. There are many cases where the ば-form comes in handy, so be sure to keep it in mind the next time you’re practicing Japanese or talking with a friend. If you keep doing your best, you’ll reach your goals in no time!