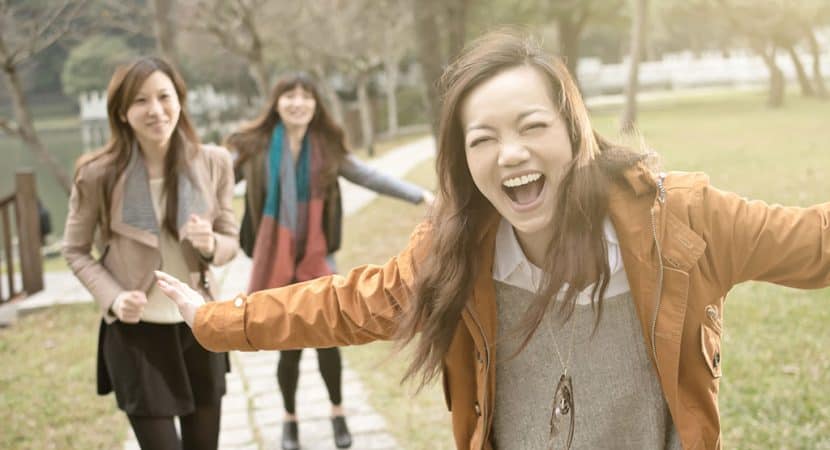 The Japanese language has many funny expressions to represent their feelings and ideas. These expressions are connected to their culture, customs, and tradition. Here are 10 funny Japanese phrases that will amuse you or may even make you laugh. However, you can actually use these phrases in conversations to impress your Japanese friends!

If you want to become fluent in Japanese quickly and easily, be sure to check out our guide to learning Japanese page for useful tips!

Actual Meaning: To have a mind like a steel trap, to have a sharp mind

Literally translated, this phrase means “a head that is cut.” However, this expression describes someone smart or who has a sharp mind.

The Japanese term 切れる (kireru) means to cut, but it can also describe someone with a sharp mind. If someone can solve problems quickly, this person used to be called 切れ者 (kire mono), “a smart person.” Eventually, Japanese people started using 切れる (kireru) to describe an intelligent person’s head/mind, 頭 (atama). Here are some examples using 頭が切れる (atama ga kireru).

1. 田中さんは頭が切れるから、なんとかしてくれるよ。
(Tanaka-san wa atama ga kireru kara, nantoka shite kureru yo.)
Tanaka-san is smart, so he’ll figure it out for you somehow.

2. 頭が切れる人だけが選ばれる特別チームに入りたいんだ。
(Atama ga kireru hito dake ga erabareru tokubetsu chīmu ni hairitain da.)
I want to be on the team that only smart people can join.

Note: Kireru can also mean “to lose one’s temper” or “to snap” at someone. Imagine being so fed up that you unleash your anger on everyone around you. When used with this meaning, it is often written in katakana as キレる (kireru).

Sometimes you may hear about an old friend. You may not even be sure where you heard it from or who told you, but you somehow learned about how your friend is doing. In Japanese, people describe this as getting information by “a letter in the wind.”

2. 風の便りに聞いたんだけど、結婚するんだって？
(Kaze no tayori ni kiitan dakedo, kekkon surun datte?)
I just heard a rumor. Are you going to get married?

If you were to translate this phrase, it would mean “to eat the grass along a path.” But its meaning goes much deeper than this.

When horses graze on grass, they stay in the same spot and don’t move from that area. They loiter while leisurely spending their time eating to their hearts’ content. Just like these horses, people can loiter or even waste their time when they should be doing something else instead.

Japanese people use the expression “道草を食う (michi kusa o kuu)” to describe someone who doesn’t arrive on time.

2. そんなに何回も道草食ってたら、いつまでたっても着かないよ！
(Sonna ni nankai mo michi kusa kuttetara, itsu made tattemo tsukanai yo!)
If you keep repeatedly loitering like this, we will never get there!

Actual Meaning: A naive girl, a girl who lived a sheltered life

Actual Meaning: To be captivated in conversation

1. 二人ともバックパッカーだったことがわかって、話に花が咲いた。
(Futaritomo bakku pakkā datta koto ga wakatte, hanashi ni hana ga saita.)
We found out we were both backpackers, so we had a great conversation.

2. 学生時代の仲間と会ったら話に花が咲いて、朝まで飲んでたよ。
(Gakusei jidai no nakama to attara hanashi ni hana ga saite, asa made nondeta yo.)
I met my friends from school, and we couldn’t stop talking. We drank until morning.

Actual Meaning: Someone who suddenly becomes quiet and submissive (when they usually are not)

You may have seen a cat brought to a place they are not familiar with. When cats are in an environment new to them, they usually are very quiet.

If someone who is usually talkative or loud becomes quiet or even submissive in a particular situation, that person can be described as “借りてきた猫 (karitekita neko)” in Japanese.

7. 雀の涙 (Suzume No Namida): Tears of a Sparrow

Actual Meaning: An extremely small amount, a drop in the bucket

To describe a tiny amount or something, you can use 雀の涙 (suzume no namida).

1. ああ、今月の給料も雀の涙だ。
(Aa, kongetsu no kyūryō mo suzume no namida da.)
Oh, my salary this month is so ridiculously small.

A building that has a narrow width but a long length is called うなぎの寝所 (unagi no nedoko). For example, Machiya in Kyoto is built this way.

Imagine an eel making a small cave its home. The cave’s opening might just be wide enough for the eel to through, but the cave itself might be very long.

2. あのレストラン、うなぎの寝所みたいに奥が深いのよ。
(Ano resutoran, unagi no nedoko mitai ni oku ga fukai no yo.)
The restaurant is so narrow, but it is very deep.

Actual Meaning: Any event can trigger other events which have unexpected results

Here’s where I think the literal meaning comes from:

The wind blows dust in the air. Many people get dust in their eyes and can’t see anything, making them lose their jobs. Many of them became shamisen players (in the Edo era, playing shamisen was a common job for blind people). Since cat skins were used for making shamisen, many cats were captured; therefore, the number of mice increased. These mice made holes in wooden buckets, causing people to buy a new one. As a result, the store selling wooden buckets made money.

The proverb, 風が吹けば桶屋が儲かる (kaze ga fukeba okeya ga mōkaru) means anything that happens can affect anything (in the most unexpected ways).

Actual Meaning: Someone with a lot of experience and know-how, with many tricks up their sleeve

To describe a person who seemingly knows everything, sometimes Japanese use 海千山千 (umisen yamasen). This may be based on an old Chinese story.

海 (umi) means “ocean,” 千 (sen) means “thousand,” and 山 (yama) means “mountain.” The literal meaning of 海千山千 (umisen yamasen) is “lived in the ocean a thousand years, and lived another thousand years on the mountain.” As a result, the person has so many experiences that they know how to act in any situation. It sounds like describing an intelligent person; however, 海千山千 (umisen yamasen) contains a little cynical feeling.

1. うちの社長は絶対損失を出さない。海千山千のしたたかさだよ。
(Uchi no shachō wa zettai sonshitsu o dasanai. Umi sen yama sen no shitatakasa dayo.)
My company’s president never takes a loss. He has so many tricks up his sleeve he can survive anything.

2. 騙されたんだと思うよ。だってあの人、海千山千みたいな女じゃん。
(Damasaretan da to omou yo. Datte ano hito, umi sen yama sen mitai na onna jan.)
I think you were fooled. She looks like she knows exactly how to act to get what she wants.