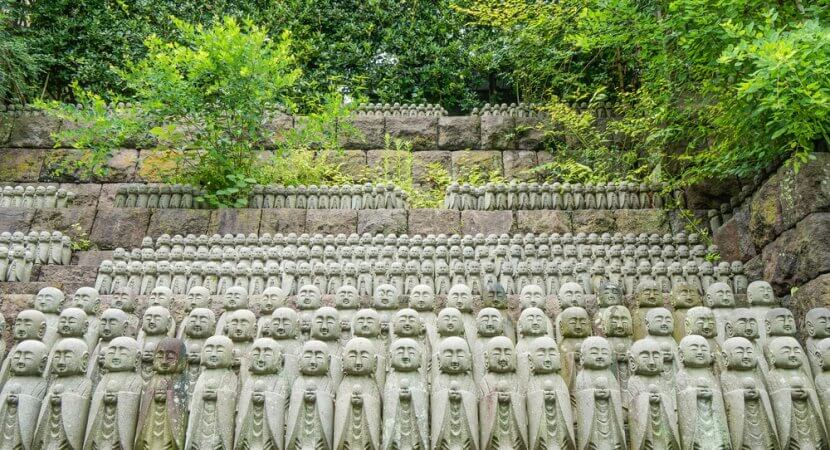 Hase-dera Temple:  Home to One of the Largest Wooden Sculptures in Japan

At about an hour outside of Tokyo, Kamakura and its hiking trail are a popular destination for day-trippers. The area is jumbled with temples and other religious sites. With its sea view and fascinating statues, Hase Temple is a popular place to visit.

Also sometimes known as Hase-kannon, the temple is famous for its large wooden statue of Kannon (called Guanyin in Chinese) who is the Goddess of Mercy.

At more than nine meters tall, this statue is one of the largest wooden statues in Japan. Gilded with gold, it is a fine example of ancient Japanese craftsmanship. Each of the statue’s eleven heads shows a different step in the stages to enlightenment and is a wonder to view from any angle.

Is It Worth Going To?

This is a lovely little temple with plenty to see. If you do the Kamakura Hiking Trail this a good place to end up, particularly in the evening when you can watch the sun setting with a seaside backdrop.

Check Out the Underground Cave

Perhaps the most interesting part of the temple complex is the Benzaiten Grotto (Benten-Kutsu) – an underground cave dedicated to the Sea Goddess Benzaiten.

The grounds of the temple are fairly large, and with its mountainside location and multi-layered design the temple doesn’t seem too crowded even when there are a good number of people visiting.

Intricate pools and rock formations give the place an idyllic, relaxing atmosphere. There is an open viewing platform which overlooks the beach and sea beyond.

Perhaps the most striking thing about the temple are the Jizō statues. Some stand at about half a meter and others are so small that they would fit comfortably in the palm of your hand, but most of them are about somewhere in-between.

Arranged in neat formations they look like a miniature version of the Terracotta Warriors, and while they look quite sweet, there is actually a sad (or sinister) story behind them.

Jizō statues are bought by families grieving for babies who are stillborn, lost in miscarriage or even for children who have been aborted.

While it seems a nice enough memorial for parents who have lost a child, I’ve heard that sometimes there is a lot of pressure put on people to buy these extortionately priced figurines, particularly for it’s who have aborted a child by choice.

I get the impression that, without atoning for an abortion with one of these statues, it is thought of as bad luck and indicates that healthy pregnancies will not be likely in the future, and therefore many people are forced to fork out for one out of guilt.

The statues, many of which a in little aprons, knitted scarves and other accessories, stay in place at the temple for a year or so before they are cleared away to make room for others.
Since World War 2, they estimate that there have been more than fifty-thousand Jizō statues donated to the Hase temple.

Discount available for groups of thirty or more

The quaint little Hase train station is the nearest to the temple, and there is paid parking available on the complex grounds. To get there, take the Enoden line (located next to JR Kamakura station) to Hase Station. The temple is a 5 minute walk from the station.