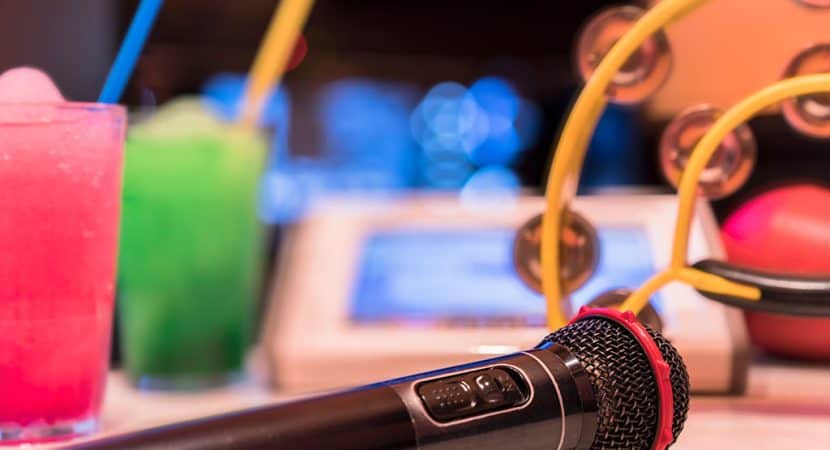 Karaoke, meaning “empty orchestra” in Japanese, is singing along to an instrumental backing track. A visual accompaniment usually shows scrolling lyrics on a screen in time to the music. Many people have tried karaoke, one of the most popular nightlife activities in Japan and globally, but few know the story behind it.

The first televised versions of these were in the 1960s- when American entertainer Mitch Miller hosted Sing Along with Mitch. The idea was that the audience would sit at home and sing along. However, sing-alongs are different from karaoke because of a group leader or lead singer who would direct everyone else and offer the main vocals of the song. The focus was on joint communal singing, not individual expressing themselves like with karaoke.

The Start of Karaoke in Japan

The first recorded karaoke technology in its homeland of Japan was a device constructed by engineer Shigeichi Negishi in 1967. Coming several years before any other karaoke machines, Negishi has a clear claim to be the innovator. He came up with the idea of combining an 8-track cassette player, which played instrumental versions of popular songs, with a microphone, allowing people to sing the vocal lines over the top. Singers would be provided with a booklet of lyrics to the songs, and Negishi christened his invention, the “Sparko Box.”

The Sparko Box was the first commercially available karaoke device, but Negishi lacked the social hook to make his machine popular. It was just a bit too novel. He kept selling his invention, but they never quite caught on. Distribution problems eventually became too much, and he stopped producing his machine without leaving much of a mark on popular culture. Similarly, in 1970, Toshiharu Yamashita, a singing coach, developed a machine for vocal practice combining an instrumental track player with a microphone. But his idea never truly broke through, either.

This leads to arguably the most important figure in the history of karaoke, Daisuke Inoue. In 1971, without knowing about the experiments of Negishi, Inoue began his foray into instrumental singing technology. An enthusiastic but struggling musician, Inoue used to play in bands and became a popular accompaniment to bar patrons as they sang.

One of his regulars was going on a business trip and asked Inoue to join him so that the musician could entertain some clients of his. Inoue couldn’t go with him, so he recorded an instrumental tape of hit songs for his friend to take on his trip and sing along with. The quirky idea was such a hit that Inoue invested in producing a coin-operated “8 Juke” machine, similar to Negishi’s creation, which provided a few minutes of amplified instrumental singing per payment.

Where Inoue truly shined was his unifying of karaoke to a social scene. His instrumental tracks were produced in different keys to help make songs easier to sing. His machine even had a basic form of reverb to make everyone sound better. He started putting his prototype karaoke machines in bars around Kobe, and the response was initially lukewarm.

People didn’t know what they were and didn’t “get” them. Once Inoue decided to experiment with paying some of the bar’s hostesses to sing on the machines, things took off. Seeing that singing along to the instrumental tracks was fun meant people wanted to try it out themselves. And what better way to blow off steam after a tough day at work than belting out your favorite tunes surrounded by thrilled onlookers? Things would only go up from here.

Throughout the 1970s, Inoue’s machines spread throughout Kobe, nearby Osaka, and then to Tokyo and the rest of Japan. The social phenomenon was in full effect. Yet here comes the twist; Inoue never copyrighted his karaoke machine. This sounds insane, as it’s one of the most influential entertainment technologies of the 20th Century. He could have been a billionaire! But for whatever reason (historians assume it was likely due to the laborious and complex nature of Japan’s copyrighting system at the time), Inoue decided to keep the ball rolling for as long as he could. Eventually, giants like JVC started producing their own karaoke machines, but Inoue continued to work in the karaoke industry, making a decent living off his idea regardless. Inoue never became the entertainment titan he could have been, but he seemed happier this way.

Who Owns the Copyright to Karaoke?

The person who eventually copyrighted karaoke technology was Roberto del Rosario, an entrepreneur from the Philippines who copyrighted it in 1975. This copyright, officially solidifying what a karaoke machine was, accelerated the spread of karaoke far and wide.  Karaoke bars appeared all across East and South Asia, and export to the United States and Europe led to the first karaoke bars opening there in the 1980s.

Innovations such as the karaoke box room, now the most dominant style of karaoke in Japan, allowed for a more private, personalized experience. And new technologies, such as the Laserdisc, produced visual imagery for karaoke, allowing singers to follow along with the lyrics in time as they sang. These final puzzle pieces transformed karaoke into an all-encompassing audio-visual experience.

Karaoke in modern Japan is still a huge force culturally and socially. There are over 8,000 karaoke parlors in the country, with the average establishment having 14 karaoke rooms each! Its popularity has given rise to an entire subculture, with terms such as 十八番 (Jūhachiban” or “Ohako“) – a kabuki-derived word for a karaoke singer’s “best” song” and ヒトカラ “Hitokara,” the practice of going to a karaoke parlor alone to unwind or practice your singing.

New songs from across the globe are added constantly, media tie-ins are frequent, and the inside of the modern karaoke booth is usually comparable to a plush hotel room.

Often you’ll find leather seats, a full surround sound system, plasma screens on the walls, and a touch-operated multi-language interface for browsing and choosing songs. Drinks and food can be ordered and delivered to the rooms in many places, and you can find karaoke places in almost every town in Japan. Of course, some karaoke shops are very small, “mom and pop” type of establishments.

Karaoke remains widespread throughout Asia, while American and European consumers have especially taken to the bar style of karaoke, with the public performance element proving enduringly popular.

A global phenomenon, karaoke has come a long way from the eccentric inventions of Negishi, Yamashita, and Inoue in the 60s and 70s. And it’s likely that the appeal of singing your heart out, of being a rockstar for 3 minutes, will never fade away.

Sam L Barker is a marketing professional with years of experience working in software and technology. He is also a freelance writer and editor focusing on the areas of Japanese culture, music, technology, the internet, and business. He used to teach English in Tokyo and loves night walks through the city.