Home
Useful Japanese Lessons
How to Say Snow in Japanese and More: The Master Guide to Winter in Japanese 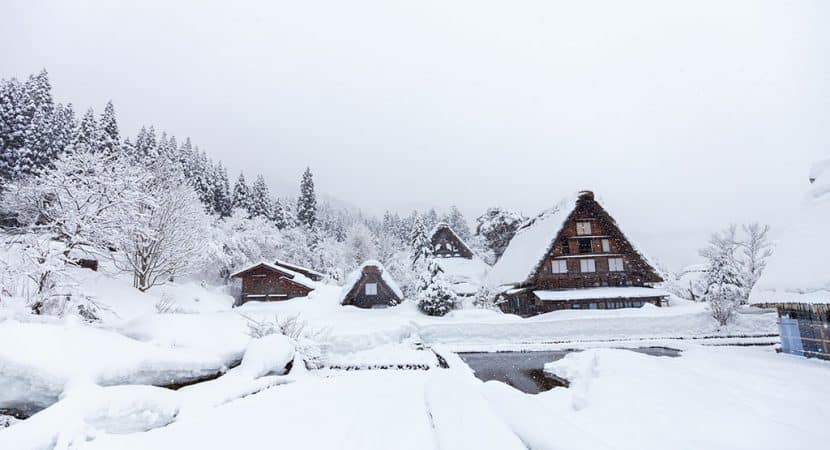 Winter plays an important part in Japanese culture, and the amount of winter-related words in the language reflects that well. In this article, we’ll cover all the essential vocab you’ll need to talk about winter in Japanese, from weather to holidays to food and activities! Whether you’re here to learn the basics or brush up on your chilly weather lingo, this is the guide for you!

How to Say Snow in Japanese

The most common way to say snow in Japanese is 雪 (yuki). This kanji contains the Japanese word for rain: 雨 (ame) – which makes sense considering snow is frozen rain! Although you may occasionally see the word stylized in hiragana as ゆき (yuki) for more basic sentences, it is usually written in kanji, so it may be a good idea to remember what it looks like.

While 雪 (yuki) is commonly used in Japanese like any regular noun, you may often see it paired with the Japanese verb for “to fall”: 降る (furu). These two terms can be used together with the particle が (ga) to turn the noun “snow” into the verb “to snow.”

Let’s take a look at a few sentence examples that use the word 雪 (yuki):

2. 雪のため電車がすべて止まってしまいました。
(Yuki no tame densha ga subete tomatte shimaimashita.)
All the trains have stopped running due to snow.

4. 歩道に雪がかなり積もっているから、歩くのは無理なの。
(Hodō ni yuki ga kanari tsumotteiru kara, aruku no wa muri na no.)
There’s quite a lot of snow piled up on the sidewalk, so it’s impossible to walk on.

As shown in the examples above, 雪 (yuki) can be used in all types of informal and formal situations to talk about snow in Japanese. However, there are many other words for snow we can use for more specific situations. Let’s go over a few of them next.

Compound Words That Use 雪 (Yuki)

Compound words combine two or more individual words to create a new word with its own meaning. The Japanese language is no stranger to compound words, as many kanji words tend to be compounds of two individual kanji. Likewise, you will find 雪 (yuki) paired with other kanji in many compound words describing snow and snow-related ideas.

As you may have noticed from some words given in the chart above, 雪 has two different readings: ゆき (yuki) and セツ (setsu).

ゆき (yuki) is the Kun-reading  (Japanese reading) – this means 雪 is generally read as ゆき (yuki) when the word is by itself or paired with words in hiragana or words with okurigana (kana, usually hiragana, that is written after kanji to complete its reading).

セツ (setsu) is the On-reading (Chinese reading) – this means 雪 is usually read as セツ (setsu) when used in a compound word of multiple kanji.

However, it’s important to remember that there are exceptions to this rule! In certain kanji compound words, 雪 is still read as ゆき (yuki) – make sure to keep these exceptions in mind as you encounter them in your Japanese studies.

Here are some examples of sentences with common compound words that use 雪 (yuki):

The list of compound words with 雪 (yuki) is practically endless, and although we’ve covered the most commonly used ones here, there are plenty more obscure and niche words out there in the Japanese language to discover!

Onomatopoeia are descriptive words that phonetically imitate sounds. Onomatopoeia words are often used in Japanese with verbs to further describe and specify an action. We can use onomatopoeia in Japanese sentences by pairing them with the particle と (to) and placing them before verbs.

When describing the snow falling, different onomatopoeia words are used depending on the type of snow.

For instance, the onomatopoeia word しんしん (shinshin) imitates the sound of something falling silently, like when it snows and it’s quiet all around.

The word ちらちら (chirachira) also imitates the sound of something falling lightly and should be used in sentences with a Japanese word for light snow like 小雪 (koyuki) or the word for snowflakes, 雪片 (seppen).

Other onomatopoeia like はらはら (harahara) describe the sound of something fluttering down and can be used with a word for soft or powdered snow like 粉雪 (konayuki).

To describe the action of a very heavy type of snow falling like hail: 雹 (hyō – hail bigger than 5mm) or sleet: 霙 (mizore), we can use the onomatopoeia パラパラ (parapara) which imitates the sound of something thudding down.

こんこん (konkon) is usually used for snow or 霰(arare), which is hail smaller than 5mm..

Lastly, we can describe the action of walking on fallen snow, 積雪 (sekisetsu), by using the onomatopoeia がりがり (garigari) or ザクザク (zakuzaku), which both imitate the sound of crunching on something.

Let’s take a look at a few sentences examples that use these onomatopoeia:

How to Say Winter in Japanese

In Japanese, the most common way to say winter is 冬 (fuyu). This kanji contains the radical for ice: 冫(nisui). The 冫(nisui) radical can also be found in other winter-related kanji such as the word for chilly: 冷たい (tsumetai), and the verb for to freeze: 凍る (kōru). 冬 (fuyu) can be used in Japanese to talk about winter in any possible type of situation, so this is definitely another word you’ll want to try and memorize!

Compound Words That Use 冬 (Fuyu)

Here are some sentence examples that use these winter terms:

Keep in mind that while these terms each have their own specific nuance and help describe more particular situations, they can all be used interchangeably with 冬 (fuyu) as well. Most Japanese people will use 冬 (fuyu) to talk about winter, so there’s no need to pressure yourself into using a more specific word!

What is one of the first words that come to your mind when you think about winter? Chances are, it’s cold: 寒い (samui).

寒い (samui) is broadly used in Japanese to describe winter, cold weather, or the sensation of feeling cold.

If we want to talk about winter being mild or warm, we can use the adjective 暖かい (atatakai), or we can use its kanji together with the 冬 (fuyu) kanji to create the compound word: 暖冬 (dantou).

Likewise, if we want to talk about winter being harsh or severe, we can use the adjective 厳しい (kibishii) or use its kanji together with 冬 (fuyu) to create the compound word: 厳冬 (gentou).

Let’s take a look at some sentences that use these words to describe winter:

4. 予報によると今年は厳冬だそうだ。
(Yohō ni yoru to kotoshi wa gentou da sou da.)
According to the weather forecast, it will be a severe winter this year.

As we can see from the above examples, i-adjectives like 寒い (samui) and 冷たい (tsumetai) are used in both casual conversation and formal situations. In contrast, kanji compounds like 暖冬 (dantou) and 厳冬 (gentou) are seen more often in formal or technical sentences.

Winter is a beloved season in Japan. Japanese people celebrate many festivals during this time of year, participate in auspicious traditions, and enjoy an abundance of delicious winter foods. Let’s go over a few of Japan’s most famous winter events, foods, and activities below!

One popular celebration is the winter solstice, or 冬至 (touji). This day usually occurs on the 21st – 22nd of December and marks the shortest day of the year. Japanese people will often celebrate this day by bathing in ゆず湯 (yuzu yu), a hot bath with whole yuzu (citrus fruit) floating in it, at home or at an 温泉 (onsen) – a public hot-spring bathhouse.

New Year’s Day, or 正月 (shougatsu), is also widely celebrated in Japan. On this day, many Japanese will visit a temple or shrine to pray for a good year ahead of them – this custom is called 初詣 (hatsumōde), which means the first shrine visit of the new year.

Another well-known event is 成人の日 (seijin no hi), or Coming of Age Day. This holiday occurs the second week into January and celebrates people who have already turned or will turn 20 years old that year. Japanese people will dress in formal attire and attend ceremonies, visit shrines, and hold social gatherings with friends to commemorate their official arrival into adulthood on this day.

節分 (setsubun) marks the official end of the winter season in Japan. This day is celebrated by participating in the tradition of 豆撒き (mamemaki), or bean scattering. Japanese will toss roasted soybeans outside the front door of their homes as a way of driving out misfortune and evil spirits while heralding in good luck for the year.

In houses with young children, the father usually pretends to be the oni, a demon by wearing a costume or mask.  The children then throw beans at this “oni” to scare him away and bring in good fortune for the year.  These beans are also eaten (clean ones that haven’t been thrown in the floor or ground).  How many beans you eat varies according to local custom, but usually you eat a number of beans according to your age.  For example, if you are 30 years old, then you eat 30 beans.

Japanese love to prepare and indulge in certain foods during the winter season. Hot stews made with delicious vegetables, meats, and fish such as chanko nabe, shabu-shabu, and oden are particularly popular during this colder time of year. Sweet treats like mikan oranges and mochi rice cakes are also enjoyed after meals.

Japanese like to engage in customary activities in the winter, such as relaxing under a こたつ (kotatsu) – a wooden table with a large quilted blanket and an electric heater underneath. It feels so warm and cozy that it’s easy to fall asleep while in your kotatsu.

During this time, some Japanese people travel to Sapporo to see the famous snow festival, 雪祭り (Yukimatsuri). The festival features large sculptures made of snow, concerts, and rows of stalls offering Hokkaido-exclusive foods.

Japanese people will also participate in annual social gatherings with co-workers, friends, and family before and after the New Year. These events are called 忘年会 (bōnenkai) and 新年会 (shinnenkai) respectively. These gatherings often take place at restaurants that serve alcohol and comfort foods.

There is no shortage of words to choose from when crafting sentences about winter in Japanese. We can use 雪 (yuki) to talk about snow or 冬 (fuyu) to talk about the winter season. If we want to talk about cold weather, we can use 寒い (samui) for cold or 冷たい (tsumetai) for chilly.

It’s also a good idea to familiarize yourself with some words for common winter activities and customs enjoyed in Japan, such as hot-spring baths: 温泉 (onsen) and heated tables: こたつ (kotatsu).

Try challenging yourself and seeing if you can come up with some creative winter sentences using some of the terms covered in this guide!

Interested in learning more Japanese lingo? Check out our other language guides for more lessons in Japanese.