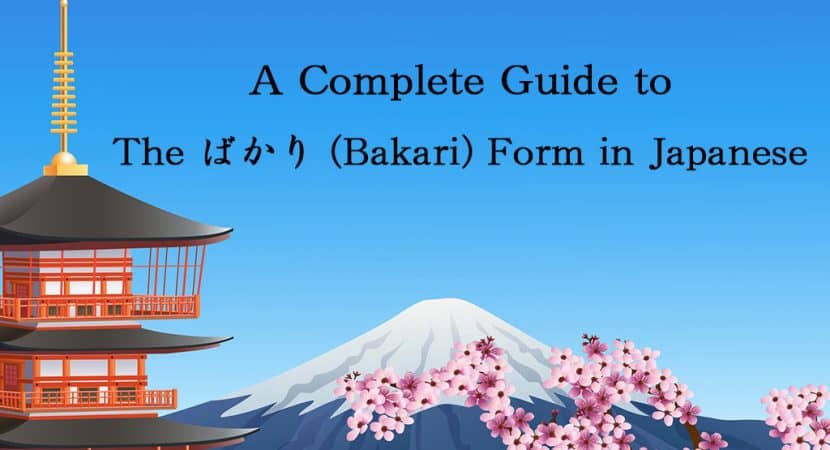 Bakari (ばかり) is a word that Japanese learners usually stumble upon early in their studies. We use the bakari form mainly with the meaning of “only,” “just,” or “nothing but ~.” It can be tricky, but together we will understand its meaning, structure, and how to use it naturally.

As you can see, bakari has a different meaning when combined with different forms of verbs or nouns. Let’s take a look at each in detail.

With noun + bakari, the speaker expresses that the amount or the frequency of something (noun) is more than expected or appropriate.

2. 仕事ばかりは、体によくないよ。
(Shigoto bakari wa, karada ni yokunai yo.)
Only working is not good for your health.

3. ここは日本料理の店のはずだったけど、寿司ばかり。
(Koko wa nihon ryōri no mise no hazu datta kedo, sushi bakari.)
This shop was supposed to be a Japanese restaurant, but there’s only a lot of sushi.

In these examples, the bakari form expresses surprise, disappointment, and judgment, and it is mainly used with a negative meaning, but note that you can also use it in a positive sense!

Using Bakari To Talk About People

Some of you might be wondering, “doesn’t dake and shika mean only too?” What’s the difference?

Dake is the most “neutral” way to say only in Japanese. Using dake expresses a limit to what you have or do—nothing more, nothing less.

For example, let’s say you got some take-out sushi for dinner with your friends. Everyone takes their food out of the bag. Your friend asks you to check the bag to see if there is anything else inside of it. When you check, you find that there are only disposable chopsticks in it.

You are simply stating what you see. There are only disposable chopsticks in the bag, nothing more, nothing less. Unlike bakari or shika, there are no feelings that there is too much or too little of something.

Bakari is similar to dake but has a nuance of “there’s so much of something, that everything else is not as important.” In other words, with bakari, you are stressing whatever noun you are talking about. A good English translation of bakari is “There’s nothing but ~.”

If we take the same example from above but replace dake with bakari, we would get:

More Examples Using Bakari and Dake With A Noun:

1. ここは日本料理の店のはずだったけど、寿司だけだ。
(Koko wa nihon ryōri no mise no hazu datta kedo, sushi dake da.)
This shop was supposed to be a Japanese restaurant, but there’s only sushi (and nothing else).

2. ここは日本料理の店のはずだったけど、寿司ばかり。
(Koko wa nihon ryōri no mise no hazu datta kedo, sushi bakari.)
This shop was supposed to be a Japanese restaurant, but there’s nothing but sushi (there might be other things, but there is so much sushi).

Shika expresses a lack of everything else except the thing you are talking about. It is used exclusively with verbs in the negative form. You can translate it with “anything but.” It gives of a nuance that something is lacking or missing.  Imagine you’re at a store and your bill comes to $10.00. When you look in your wallet, all you have is $5.00. This lack of something is what shika implies.

Going back to our previous example, using shika would result in this sentence:

Another Example of Shika:

ダイエット中なので、今週はサラダしか食べていない。
(Daiettochū nanode, konshū wa sarada shika tabeteinai.)
Since I’m on a diet, this week I haven’t eaten anything but salad.

A verb in the plain past tense + ばかり (bakari) means that the action has just taken place and it has just been completed.

It is very straightforward, and you can start using it right away to step up your daily conversation.

This form is used to describe an action repeated habitually in a criticizing or negative way, emphasizing that the subject is not doing anything else.

The nuance is that you only do one activity when you should be doing something else. Imagine a mother telling her son, “All you do is play video games!”

1. 就職活動をしないで、毎日お酒を飲んでばかりいる。
(Shūshoku katsudō o shinaide, mainichi osake o nonde bakari iru.)
He is not looking for a job, and all he does is drink every day.

2. 宿題をしないで、テレビを見てばかりいる。
(Shukudai o shinaide, terebi o mite bakari iru.)
All he does is watch TV all day and doesn’t do his homework.

The dictionary (plain) form of a verb + ばかり (bakari) has two different usages. The first usages will translate to “all I do” or “all I can do.” The second usages will give it a meaning of “there is nothing but” or “all I need to do.”

It means that you did everything necessary, and I now can only do is [verb].

2. 食事の準備は終わった。あとは友達が集まるのを待つばかりだ。
(Shokuji no junbi wa owatta. Ato wa tomodachi ga atsumaru no o matsu bakari da.)
I’ve finished preparing the meal. All I need to do now is wait for my friends to get together.

This grammar structure indicates that since I have done everything in my power or everything that I can do at the best of my ability, the result of the action is out of my control, and all I can do is [verb].

When bakari is used right after a number and counter, it indicates an estimate. It is used with distance, time, objects, people, or anything countable. Just remember that you need to use a counter. You can’t use bakari with just a number.

○ ペンが十10本ばかりあります。(Pen ga juppon bakari arimasu.) There are about 10 pens.

Bakari needs to follow a counter.* The bakari in the second sentence follows the number 十 (juu = 10), so it is incorrect.

*Note: Bakari needs to follow a counter most of the time IF the context is not clear. If the context is clear (the person you are speaking with knows what you are talking about) then it is possible to use bakari without a counter.

1. 八十ばかりのおばあさんが一人で歩いていたけれど、大丈夫かな…
(Hachijuu bakari no obāsan ga hitori de aruiteita keredo, daijōbu kana…)
I saw an old woman who looks to be around 80 years old was walking alone. I’m worried about her…

Notice in these examples that the listener knows what the speaker is talking about, so bakari can be used without a counter.

Examples of Nouns With A Counter + ばかり:

Other Uses of Bakari:

Here are some other uses of bakari that are not as common as the others on this list, but still useful to know.

Verb/Noun/Adj + ばかりに means “just because” and it is used to explain why something negative happened.

**Note: Remember that in the case of na adjectives, you must include the な (na) when using bakari.

一瞬の不注意ばかりに事故が起きた。
(Isshun no fuchūi bakari ni jiko ga okita.)
Just because I lost attention for a second, an accident occurred.

お金がないばかりに、友達と卒業旅行に行けなかった。
(Okane ga nai bakari ni, tomodachi to sotsugyō ryokō ni ikenakatta.)
I couldn’t go on a graduation trip with my friends just because I don’t have any money.

彼女は綺麗なばかりに、職場の同僚の女性たちに嫌われているようです。
(Kanojo wa kirei na bakari ni, shokuba no dōryō no joseitachi ni kirawareteiru you desu.)
Just because she is pretty, it seems that the female co-workers at her workplace don’t like her.

Plain Form Verb/Noun/Adjective + とばかりに (To Bakari Ni): As If To Say ~

Plain Form Verb/Noun/Adjective + とばかりに expresses an action that appears to be conveying some sort of emotion or feeling. What the heck does that mean?

In English, とばかりに can be translated, “as if to say.” Imagine a guy trying to get a woman’s phone number at a bar, but she keeps looking away from him.

“She kept looking away from him as if to say she wanted him to go away.”

Or maybe you ask your friend to read over your essay.

彼はだめだとばかりに首を横に振った。
(Kare wa dame da to bakari ni kubi o yoko ni futta.)
He shook his head as if to say it was not good.

***Note: If you do use a noun or na-adjective, you must insert a だ (da) before the とばかりに.

彼は自分がチームのリーダーだとばかりに同僚に指示を出した。
(Kare wa jibun ga chīmu no rīdā da to bakari ni dōryō ni shiji o dashita.)
He gave his co-workers instructions as if to say he is the team leader.

田中さんは部長のことが嫌いだとばかりに飲み会ではいつも離れた席に座る。
(Tanaka san wa buchō no koto ga kirai da to bakari ni nomikai dewa itsumo hanareta seki ni suwaru.)
Tanaka san always sits away from the manager at our nomikai as if to say she doesn’t like him.

Plain Form Verb/Noun/Adjective +と言わんばかりに (To Iwan Bakari Ni): As Though ~ / As If ~

This pattern is virtually identical to the previous とばかりに above. In fact, you could use either phrase interchangeably to mean the same thing. The と言わんばかりに (to iwan bakari ni) comes from ancient Japanese that carried over until today.

At first glance, the 言わん looks like it would be the casual negative form for 言う (to speak). However, this 言わん is actually the old Japanese volitional form (言おう in modern Japanese). This older Japanese form is still being used today.

Taking the example from above, if we replace “to bakari ni” with “to iwan bakari ni,” the meaning of the sentence will remain the same.

彼はだめだと言わんばかりに首を横に振った。
(Kare wa dame da to iwan bakari ni kubi o yoko ni futta.)
He shook his head as if to say it was not good.

If they both mean the same thing, which one is better? Both of these expressions are not used very often, but とばかりに would be considered the more casual expression of the two. You could use both if you were writing academic like essays or literature, but と言わんばかりに does have a more formal feel to it.

Bakka and bakkari are the colloquial versions of bakari, but the grammar patterns and usage are the same. If you’re talking to a friend, you can substitute bakari with bakka or bakkari to sound more natural.

2. 宿題をしないで、テレビを見てばっかりいる。
(Shukudai o shinaide, terebi o mite bakkari iru.)
All he does is watch TV all day without doing his homework.

Bakari is a composite grammar form but let’s look at the bright side. Bakari is easy to recognize!

When you see or hear the word bakari in a sentence, think about:

Margherita discovered Japan at 17, decided to study Japanese at university and has been chasing the Land of the Rising Sun since then. Kanji lover, nature enthusiast, and conbini ice cream connoisseur, she is currently discovering Tokyo neighborhood by neighborhood.