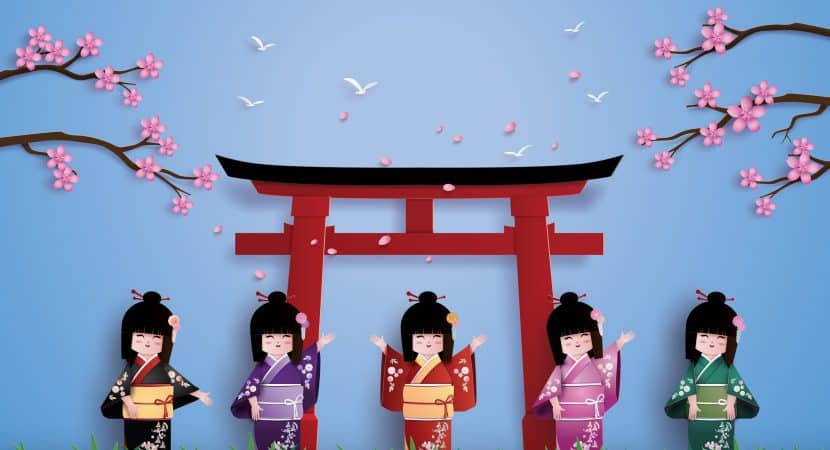 Japanese girl names changed a lot with the times. In this list, you’ll find some of the most common, popular, and even unconventional Japanese names for girls.

Japanese girl names often use the kanji characters 子 (ko) or 美 (mi / yoshi). The direct translation of 子 is “child.” However, using 子 for a girl’s name doesn’t mean that the parents wanted their daughter to be a child forever. 子 has been traditionally used for girls’ names since the Heian era. 子 is pronounced as “ko,” and it comes at the end of a name. The kanji, 美, means beautiful in Japanese. This pronunciation is either “mi” or “yoshi.” 美 can be used anywhere in a girl’s name (first, middle, or last character).

Many kanji characters can express the “Yō” part of this name. The most common kanjis are 陽 and 洋; 陽 means “sun” or “sunshine” and 洋 means “ocean” in Japanese. Parents who named their daughter 陽子 (Yōko) might have wanted her to be a bright, cheerful person. If parents used the kanji 洋子 (Yōko) instead, they probably hoped their daughter would have a big heart.

The “Kei“ part of Keiko also has many different kanji. Here are some of the more common ways to write Keiko using kanji:

There are many, many ways to write the name Emi in kanji. A common way is 絵美 (Emi). The meaning of these two characters translates to “beautiful picture.” Some prefer to use one kanji character, like 笑 (Emi). 笑 means “smile.”

愛, meaning love, is the most commonly used kanji for the name Ai. 藍 is also common. The meaning of 藍 is “indigo blue,” a noble color. It is common to combine the name Ai with 子 (ko) to form Aiko, which is another common Japanese girl’s name.

As times change, many new Japanese girl names emerge and replace some of the common names above. One of Japan’s biggest life insurance companies has been researching the trends of names. Here are the top 5 popular Japanese girl names according to their research from November 2021:

The direct translation of 紬 (Tsumugi) is pongee (a thin and soft fabric originally made from silk). This kanji describes taking out threads from things like a silk cocoon, cotton ball, or hemp plant. As it turns out, 紬 (Tsumugi) has a meaning of “pulling out clues” from a situation. A girl’s parents might name her 紬 with the hope that she will be intelligent, hard-working, and successful.

This combination of the kanji characters gives off a feeling of something “bright.”

陽 means “sun” or “sunshine.”  葵 translates to “mallow,” a family of flowers in Japan. 葵 is also used in words like himawari (sunflower in English). The kanji for himawari is 向日葵.

From those two kanji, a girl named 陽葵 is considered bright, positive, and warm-hearted. This kanji combination is not very common, so the parents will decide how it’s read.

The meaning of 凛 is “dignified” in Japanese. Japanese people usually feel a sense of beauty, strength, and neatness from this kanji. 凛 also means “icy cold,” which is why many girls with this name were born in winter.

The kanji 澪 was created to describe ancient people praying to a god for water. Today 澪 has the meaning of a “waterway” deep enough for ships to go through.

Many parents name their girls 澪 (Mio or Rei) not only because of the meaning but also the beautiful look and sound of this kanji.

芽 means “bud,” and 依 means “to rely on.” 芽依 (Mei) has the feeling of beautiful luck, like when a plant sprouts. Many parents who named their baby girl 芽依 (Mei) love how it sounds and how easy it is to pronounce.

These trendy girl names are very different from common girl names. They reflect the new generation. One of the characteristics of these new names is the unusual way they are read. Some of the examples above are difficult to read for most people because the pronunciation of the kanji is different from the “standard” reading.

If a name is pronounced completely different from the original kanji, or if the name is very unconventional, these names are called キラキラネーム (kirakira nēmu).

Parents often pick the name based on the sound (often from English). They then find the kanji characters that have a similar meaning. As a result, Japanese people can understand the idea behind why the baby was named in that way. However, most people can’t read the name since it is so unconventional. Here are some examples:

The name Doremi is the combination of “do, re, and mi” based on the musical scale. 七 means “seven,” and 音 means “sound” in Japanese. Since there are seven sounds in the musical scale, the name 七音 is pronounced Doremi as a キラキラネーム (kirakira nēmu).

The standard reading for 純 is “Jun.” The meaning of this kanji is “pure,” so this キラキラネーム (kirakira nēmu) is pronounced “Pyua” instead of “Jun.”

耳 means “ears,” and 長 means “long” in Japanese.  Usagi means “rabbit.” A girl with the name Usagi may use these characters: 耳長. The parents might have thought that “usagi” sounds very cute.

The Japanese title of the Disney movie “Frozen” is アナと雪の女王 (Ana to Yuki no Joou.) Japanese people often shorten this title to “アナ雪 (Ana Yuki).”

月 means “moon,” and 姫 means “princess” in Japanese. This name is pronounced as Runa (luna), ignoring the princess kanji for the reading. However, she appears to be a “princess of the moon” when just looking at the kanji characters.

The direct translation of these characters, 希 and 星, is hope and star, respectively. In Japanese, a star shining is described as kira kira, kirara, or kirari. As an unconventional name, these two kanji characters are read as “Kirara.”

This name comes from the English word “heart,” which is 心 in Japanese. 姫, which means “princess,” but is not used in the pronunciation of this name. The idea behind this name is similar to 月姫 (Runa), #6 on this list.

紅葉 is pronounced “kōyō” or “momiji” in the standard way.  Kōyō is the red, orange, and yellow leaves you find in the autumn.  Momiji is a Japanese maple tree. As a キラキラネーム (kirakira nēmu), 紅葉 is pronounced as Meipuru (Maple).

In Japanese, 心 is pronounced “kokoro,” and 愛 is pronounced, “ai.”  Kokoa combines these two words. Japanese people may feel a sense of warmth and a heart full of love from these two kanji. Most English speakers will recognize this name from cocoa.

Some people love キラキラネーム (kirakira nēmu) because they are totally unique and different.

Sometimes these names may not fit in traditional Japanese culture, which means following the cultural norms. In time, if キラキラネーム (kirakira nēmu) becomes more popular, these names may eventually be considered completely normal. We’ll see what happens in the next decade.