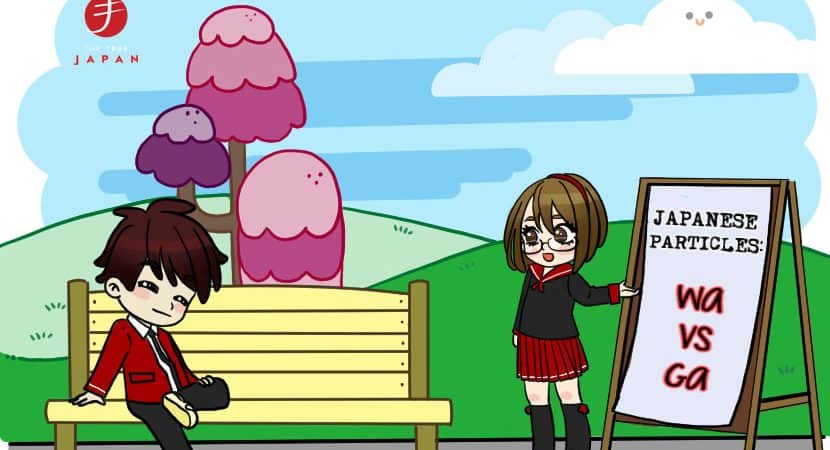 Wa and Ga: A Tale of Two Particles

When I started learning Japanese way back in 2002, my white-haired professor shared a daunting, darkly hilarious fact: by the end of our first semester, we would have a good idea how to use wa and ga correctly, but it would take us until we were his age to truly understand them.

No wonder so many people (even native speakers) have trouble with these two seemingly-interchangeable particles!

Whether you are new to Japanese or an experienced speaker who has lived in Japan for many years, differentiating between when and how to use wa (written as “は” – ha) and ga (が) can be a challenge.

In this article, we will discuss some of the main differences and use cases for wa and ga, which should be useful for both newcomers and longtime learners of Japanese. We won’t cover every possible usage, but in the next fifteen minutes or so, you can have enough of a handle on things to get these two particles right at least 90% of the time.

The Three Major Differences Between Wa and Ga

Although there are a few fringe cases and rules that can be broken, in this article we will stick to the following three main topics that cover the majority of the use cases for wa and ga:

1. Wa as a topic marker, ga as a subject marker.

2. Wa for neutral statements about different things, ga for emphasizing one thing over another.

First, a basic reminder for those of us who haven’t had English grammar classes lately:  What, exactly, are topics and subjects?

A topic tells you what a sentence is about.

A subject is something that performs an action or has actions performed on it (including with “to be” verbs like is/was/will be in English, or desu/deshita, etc. in Japanese).

In their most fundamental forms, wa is used as a topic marker, while ga is a subject marker; they each put emphasis on something else in a sentence to clarify and define the structure of a sentence. Wa introduces the topic of a sentence or broader conversation, while ga indicates individual subjects within that topic.

Not all sentences need ga to carry out this function, especially simple ones that convey necessary information where the subject and topic are the same:

Here, Tokyo is both the topic of conversation and the subject of this short sentence. However, in even slightly more complex sentences, it becomes necessary to use wa and ga together to make the structure of your statements clear:

The topic has changed from “Tokyo” to “today,” and Tokyo has become the subject, marked by ga. In each of these two sentences, the verb is desu, which acts as a simple “to be” or “is” verb.

Try to pick out the topic and subject in the following sentences:

In each case, the word that precedes wa is the topic of the sentence. Wa tells you what someone is talking about; the first sentence is about “me” (watashi), while the second is about Tanaka-san.

Similarly, the word (or words) that precedes ga is the subject—in this case, inu (dogs) and neko (cats). While ga has several other key uses at the beginner level, you can usually get away with treating ga as a marker for the subject that precedes it, while wa does the same for the topic. If there is no ga, the topic and subject are probably the same.

So What Is the Difference Between a Topic and a Subject?

In Japanese, once the topic is established at the beginning of a conversation, paragraph, or other exchange, it may not be explicitly stated again. This means that it is often the case that subsequent phrases following a wa topical statement will use an implied subject without repeating the wa topic marker. In other cases, if the topic is obvious, it might not be stated at all.

Put simply, in Japanese, if everyone knows what the topic is, there is no need to waste time pointing it out. This is a major difference from English, where the topic is usually re-stated in each sentence (words like he, she, I, it, and they all carry out this function). Here are two examples of a set of statements with the same topic, where subsequent statements use the same implied topic and drop wa entirely as a result.

In the first and second sentences, the topic (me, my mother’s office) is clearly stated in the first sentence using wa as a topic marker. In the second sentence of each statement, because the topic has not changed, it is implied rather than explicitly stated. It isn’t necessary to add a topic again in Japanese until you switch to a new one.

Finally, it is also perfectly acceptable to leave out a wa statement entirely when the topic is obvious:

Although it is not stated explicitly, we can assume that the topic is the speaker (“I”), who is sharing their personal preferences. Once again, ga marks the subject, which is sake. The speaker or writer of the sentence could begin explicitly with “Watashi wa,” but would only need to if it was not otherwise obvious that they were talking about themselves.

When comparing two things without emphasizing one over the other or adding any value, preference, or other judgment, it is acceptable to simply put two wa sentences back-to-back:

This is a very simple way of writing that doesn’t convey much information to the reader or listener, so it is less common to see strings of successive wa statements in real-world use. Instead, it is much more common to see constructions that use wa and ga to make comparisons, add emphasis, or place value on one thing or another.

Ga also adds emphasis to your statements, and this is one of its most common uses. What is the difference between the following?

In basic English translation, these sentences are the same. They both mean “This ramen is delicious.” However, in the second version, ga is used to emphasize that the ramen is delicious and that the speaker likes or wants to eat it.

If you have taken some Japanese, you probably already know that when you are expressing the things you like or want, as a general rule, you should use ga. Making statements like “I like X” or “s/he hates Y” (like in the sample sentences from Part 1 on dogs and cats) will always involve ga instead of wa.

Part of this difference is because by stating interests or preferences you are both adding emphasis to the thing you like or dislike and sharing new information with the listener.

Wa and ga each gain additional meaning when you need to share information that others might not know about or have access to. This is a pretty straightforward but important way to use ga. Let’s jump straight into two examples:

In each of these cases, the speaker is providing information to the listener. In either case, wa or ga can be used. Why use wa in the first sentence and ga in the second? Often, ga is used to convey new information that might not be obvious or intuitive, while wa is used when the speaker assumes the listener already has that information.

Based on Part 1, we know that in the second sentence, the topic is still the hotel, and the speaker is sharing with the listener that Mt. Fuji is visible from the rooms. This ga statement assumes the listener doesn’t know about the view from the hotel, and both emphasizes and provides that new knowledge to the listener.

Those Three Cases Are Great, BUT…

There is one additional common use for ga, which is different from the subject/object and informational markers we have discussed so far. It involves adding contradictions and contrast to statements, like “but” or “however…”

Here, the ga in the middle of the sentence links together the two contrasting phrases around it:

Finally, when ga appears at the end of a statement or sentence, it can be used to express doubt or polite disagreement, often by leaving these specific negative sentiments unspoken.

Much like when a topical wa statement (like the one above) is dropped because it is obvious to the listener, a negative or contradictory ga statement can go unspoken for politeness. Rather than stating obtusely that one disagrees or does not want something, it can be more reasonable to end a statement with a more subtle, incomplete “ga…”

Let’s say a friend (Tanaka) wants to go to a concert, but you aren’t a fan. How can you decline without insulting them?

This way, you are stating that you no longer like something, without expressing a directly negative sentiment about it. Now you can spend your Friday night at home learning more Japanese!

I am a historian with a specialty in premodern Japanese social and environmental history. I have studied and worked in Japan for a total of seven years, including four years as a visiting scholar at the University of Tokyo, and hold a PhD in Japanese history from the University of Michigan.