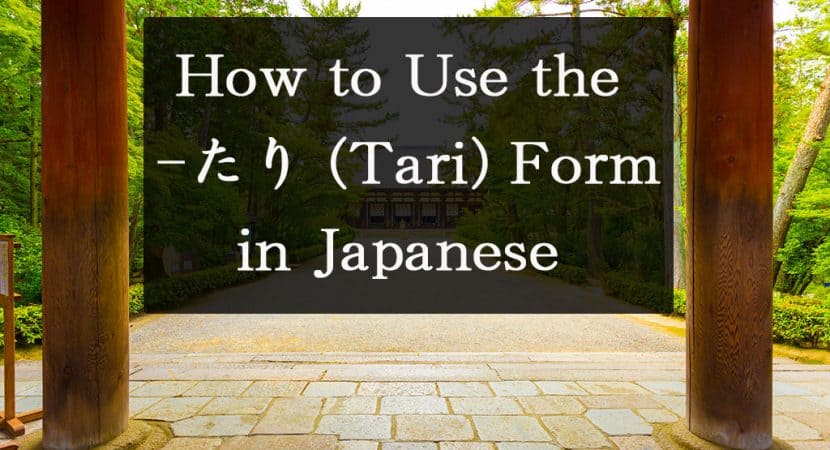 There are multiple ways to string verb phrases together in Japanese, one of which is by using the て (te) form. The て form is used to comprehensively list the actions of someone or something.

However, another grammar point can also be used to make a list: the 〜たり (~tari) form. But first, let’s take a quick look at examples of sentences using the te form.

The Tari Form in Japanese

The ~tari form of verbs is similar to the te form; it is most commonly created by conjugating verbs and connecting them within a sentence. However, the tari form differs from the te form in its meaning and nuance.

While the te form is used to list all relevant actions necessary to the sentence, the ~tari form can imply one or several of the following:

Using the ~Tari Form With Verbs

To begin, the standard example that uses the ~tari form follows the pattern below.

In this sentence, the two representative actions, drawing and listening to music, are conjugated into their past tense form, and the hiragana ri (り) is added. The actions are then listed in order and are directly followed by the main verb of the sentence, in this case, します (shimasu). While using two verbs in ~tari form is most common, occasionally three or four verbs may often be used.

The Nuance of the ~Tari Form

The example sentence above tells us that the speaker might have several activities they consider as hobbies and that drawing and listening to music are the main two. In general, this use of the tari form shows a representative list rather than a comprehensive one.

Another use of the ~tari form with verbs is to show two actions repeated over and over, usually in a cyclical pattern. The following example sentence shows this use.

The verbs 出かける (dekakeru = go out) and 戻る (modoru = return) are opposites, and so using them with the tari form conveys the meaning of repeated behavior or action.

How to Conjugate Verbs Into the ~Tari Form

Knowing how to conjugate verbs in the ~tari form is important, as said conjugation differs depending on the type.

To start, let’s discuss how to conjugate group 1 verbs, also known as u-verbs.

U-verbs in Japanese end in a hiragana other than る (ru):

To make the ~tari form with u-verbs, change the verb to its past tense and add “り” at the end.

If you don’t know how to create the past tense of group 1 verbs, check out our beginner’s verb conjugation guide. It teaches you everything you need to know to conjugate all 3 types of Japanese verbs.

If you need a quick refresh, changing group 1 verbs into their past tense form is dependent on which hiragana makes up the end of the verb.

Once you have converted a group 1 verb into its past tense form following this pattern, you can then add “り” to the end to make the tari form.

The next verb group to discuss is the group 2 verbs, also known as ru–verbs. Ru verbs end in the る (ru) hiragana, preceded by either an “ee” sound or an “eh” sound.

To make the tari form with a ru-verb, start by replacing the “る” with “た” (ta) to make the verb’s past tense form.

As with the ru-verbs and u-verbs, the ~tari form can be made by adding “り” to the verb’s past tense form, though irregular verbs have unique past tenses.

All that is left is to list them together in a sentence, and you’ve successfully used the ~tari form!

While the main use of the tari form is with verbs, the form can also be used in descriptive sentences. Instead of referring to representative actions, you can refer to objects or descriptors. First, let’s look at combining the ~tari form with nouns.

Creating the ~tari form with verbs requires conjugating said verbs into their past tense, but as expected, nouns have no past tense or other conjugated form.

This is where the verb です (desu, to be) becomes essential. The です verb is conjugated into the ~tari form and added to each noun in the list.

Then, as with all other verbs, the り is added to the end.

All that’s left is to pair this form with the nouns you want to list. Here is an example sentence with nouns instead of verb phrases:

Continuing with descriptor sentences, the ~tari form can also be used with adjectives. Like nouns and verbs, these adjectives represent the object being described, implying that they are the main points of interest but not exhaustive. Using the ~tari form with adjectives gives the listener a general image or atmosphere for the described item, person, or object.

To make the ~tari form with adjectives, the adjectives must be conjugated into their past tense, similar to verbs. However, the conjugation depends on whether the adjective is an い adjective or a な adjective.

For い-adjectives, replace the “い” at the end of the word with “かった” to make the past tense.

After which, you add “り” at the end to make the tari form.

For な-adjectives, you drop the な used when combining the word with a noun, and instead use the ~tari form of です described above.

You can then make a list of the adjectives in a sentence to describe the object or person. Here is another example sentence that uses adjectives.

The ~tari form is a useful way to list verbs, nouns, or adjectives as representatives of a larger list and to soften or generalize your Japanese when speaking. Be sure to keep this grammar point in mind when describing something next time!