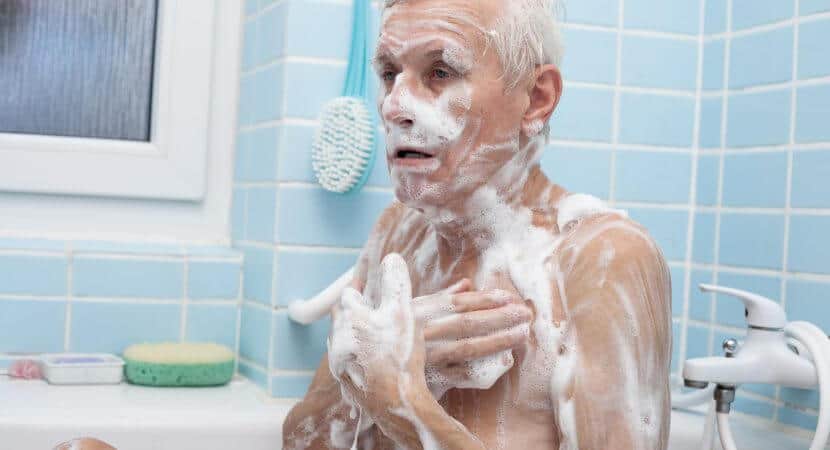 I love Japanese onsen.  Soaking in a hot, natural bath takes away all of my stress and fills me with peace and relaxation.

However, I have also had some traumatizing experiences.  Here is one of them.

Welcome to… My Japanese Onsen Experience…or should I say Nightmare?  Run away while you still can.

I remember it all too clearly.  I was still a young lad, a college student just trying to enjoy my time in Japan.  I had been to Japan many times before, but I only went to an onsen once.  That was an interesting experience, and I definitely wanted to try it again.

One day, I decided to take a short trip to Ishikawa prefecture, which is located on the Sea of Japan coast.  I never been there before, so I thought, “why the hell not?”  I didn’t have any plans, so I just ended up in a random town in the evening.  Well, I didn’t have a place to stay, so I decided to walk around until I found something…if I found something.  If not, I guess I would be sleeping inside of the train station until I got kicked out.

Luckily, I found a hotel that had rooms available.  What was even better was that this hotel had a spa/public bath.  Not an onsen, because the water is not from natural sources, but still nice to relax in.  The baths are pretty much big Jacuzzis, but there were many baths too choose from.  They even had one outside, so you could bath while feeling the cool air and taking in all of the beautiful scenery.

Needless to say, I stayed there for one night.  Since the bathing area/baths were open until early in the morning, I decided to go there at around midnight.  Amazingly, it was full of older men, even at that hour.  Nothing like being surrounded by a bunch of old penis to help me relax.

I proceeded to take a shower and soak in one of the baths.  By this time, 95% of the people had cleared out.  There was probably only 5 or so people in the whole spa area.

I was getting hot, so I decided to take a cool shower.  If you don’t know what Japanese bathing areas look like, it is pretty much a stool on the ground with a faucet/shower on the wall right in front of you.  In this bathing area, there were 4 rows, with each row having around 7 or so showers.  If you do that math, that is AT LEAST 28 spaces in which you can take a bath.

Well I sat down on a stool, and I was the only one taking a bath.  So it was me, and 27 empty stools.

Stay with me folks, here is where it gets interesting.

An older man, probably in his 60’s or 70’s comes to the bathing area, apparently to take a shower.

He comes and sits down RIGHT NEXT TO ME!  He could have had any seat there.  But he had to come and sit down right next to me.

I thought that was weird, but since he was old, he just didn’t care about those kinds of things.

So I went back to taking a shower.
As I was rinsing my hair with my eyes closed, I heard the stool next to me move.  I figured that old man left.  To my surprise, when I opened my eyes, that old bastard was standing right above me…apparently so he can get a better view of “my Mt. Fuji.”

“Okay, fuck this!” I thought to myself.

So I quickly ended my shower to go back into one of the baths.  I chose the biggest one, since it was the hottest and no one else was in there.  I walked over to the very back corner of this bath and sat down.  I shit you not, 1 minute later, this old man comes and enters this bath.

And guess where he sat?

That’s right, this motha fucker came and sat down…

RIGHT NEXT TO ME.

This bath was probably around 6 meters long, and 3-4 meters wide.  20 guys could easily fit in there, 30 if you don’t mind some ass to ass action.  Not only that, but to get to where I was sitting, he had to walk ALL THE WAY OVER to the end.

I instantly stood the fuck up and went to the outdoor bath.  At least there was a 2 or 3 people in there.  Safety in numbers right?  So I go there, and once again I sat in the corner.  Can you all guess what happened next?

I know you’re probably thinking, “Oh heavens to Betsy, did that naughty old man come and sit down right next to you again?”

You bet your fucking ass he did.

So I immediately got up and went upstairs.  That’s where the personal baths were.  These baths were so small, that only 1 person could fit in it comfortably.  2 people could fit, but one person would literally be sitting on your lap.

I thought to myself, “if this shriveled dick motha fucker comes and sits down next to me in this bath, there’s gonna be some repercussions.”

And that’s when it happened…

I saw the entrance door open, and in super-slow motion, I saw the old, naked man, coming straight for me.  He came right by me, but then by some miracle, he went back downstairs.

I thought I finally got rid of him.

I went back downstairs to find that I was all alone.  I was the only one left in the whole place.

I took one last shower and then headed towards the clear, exit door.

And that’s when this shit got real.

That creepy old man was waiting by the door.

Now I was ready to bust a move and give this guy some kung-fu lessons that would make Bruce Lee proud.

But I realized how stupid that was because he was old…and I was…well young, handsome, and in shape.

So I walked quickly past him, trying to cover my manly goods as best as I could and headed straight for my locker.

Now there were many rows of lockers.  There were probably more than 50 total.

As unbelievable as it sounds, I was still shocked when that crusty ass old man came right next to me to dry off, because his locker was RIGHT NEXT TO MINE.

I noticed him checking out my sushi roll and two rice cakes as I was drying off.

At this point, I was ready to tell this guy off.

But I was so creeped out I decided to get the fuck out of there as quickly as possible before he could follow me again.

So I quickly got dressed and headed for the elevator.

I saw the old man speed up to try and get dressed, apparently so he could catch up with me.

Too bad he couldn’t move fast.  I made it to the elevator before he even had the chance to button his pants.

That being said, you bet your ass that I kept looking over my shoulder to see if anyone was following me.

Now you would think that this would make me not want to go back to any public baths or onsen again….wrong!  Onsens are so awesome that I went back many times.  I’m just on the lookout for creepy old dudes.

Have you ever been in an onsen before?  If you have any funny or weird stories, leave a comment below and let us know!