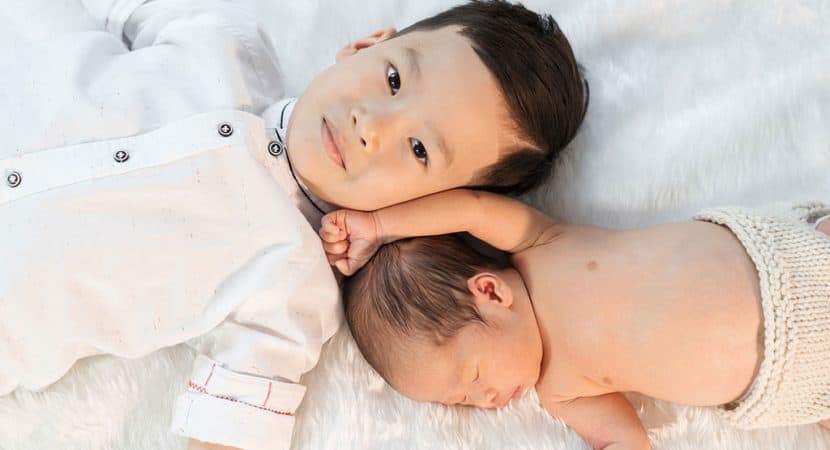 Names reflect the times and the era. Here are some common 2022 Japanese names for boys.

The basic feeling of Hiroshi is “big” or “vast.” There are many ways to write Hiroshi in kanji, but here are some of the more common ones: 弘, 宏浩, 広志.

Sometimes parents use hiragana (ひろし) or katakana (ヒロシ) instead. The reason for this is that each kanji has a different meaning. For example, let’s look at one way to write Hiroshi in kanji: 広志. 広 (hiro) means “big” or “vast” while 志 (shi) means “ambitious.” Parents who use this kanji 広志 probably want their son to become a great man with ambition. Some parents prefer to use the name without worrying about any meaning. In this case, they will usually use hiragana or katakana instead of kanji.

One of the meanings of Akira is “bright.” 明 and 晶 are commonly used as the first kanji character in this name. Writing Akira in hiragana (あきら) or katakana (アキラ) is often used as well.

People usually associate this name with something “high” or something that “excels.” Two common ways to write this name in kanji are 隆志 or 高志. Another way to write Takashi is 孝志. The character 孝 has a meaning of “respecting your ancestors” and “becoming a good person.”

Makoto gives off a feeling of “sincerity.” In this case, the kanji will be 誠 (Makoto). Another common kanji used for Makoto is 真, which means “truth.”

Some kanji are pronounced “ken” but with different meanings. For example, 賢 means smart or better than others, 健 means healthy, and 研 means polishing or studying things thoroughly. Common kanji for “ji” are 治 (to rule), 児 (child), 二, or 次 (meaning second; thus, if the boy is the second child of the family, these kanji are often used).

Names also reflect the time, the culture, or fashion. According to the research done in November 2021 by one of the biggest life insurance companies in Japan, Meiji Yasuda Seimei, the top 5 popular Japanese boys’ names are the following:

蓮 means lotus. Since lotus comes out of the mud and blooms into a beautiful flower with elegance, many Japanese parents name their boys 蓮 (Ren), often hoping he grows strong, fighting life’s difficulties with ease.

This name can be pronounced in many different ways. Parents will decide on the reading of these kanji characters. The kanji 陽 means “sun” and 翔 means ” to fly” in Japanese. 陽翔 (Haruto, Hinata, Hinato, etc.) has positive meanings like “cheerful” or “an energetic person shining on others,” and even flapping wings to fly freely to the future.

湊 means “gathering” or “harbor.” Boys named 湊 (Minato / Sou) have parents who want them to have a good heart and have many friends.

*Note:  In Japan, things considered green in other countries are referred to as 青 (ao), meaning “blue.” For example, things in nature like plants or vegetation are usually described as being 青 even though it’s actually green. Also, a green traffic light is referred to as a 青信号 (aoshingō), which literally translates to “blue traffic light.” More modern things like western clothes, cars, and buildings will be described using 緑 (midori), the Japanese word for “green.” This can be a difficult concept to grasp at first, but most people who live in Japan get used to it quickly.

A standard image most Japanese people have of 樹 is a large tree. Parents who name their son 樹 (Itsuki, Tatsuki, Izuki, or Miki) will want them to be honest and be like a tree that grows high and straight.

Rules For Name Your Child in Japan

In Japan, there is a rule for naming people. The Ministry of Justice has a kanji list that tells people which kanji can be used for specific names. The list is called jinmeiyō kanji; however, there are no rules on how to pronounce these kanji.

Some people began naming their child using the kanji from the list but registered the child’s name to be pronounced differently. As a result, people don’t know how to read the child’s name. These names are called キラキラネーム (kirakira nēmu).

男 means “man/men” in Japanese, and its basic pronunciations are otoko, dan, nan, or o; however, some boys’ names using this kanji are pronounced “Adamu,” which is the equivalent of Adam.

宇宙 means “the universe” in Japanese and is usually pronounced uchū. The kirakira version of this name is pronounced as “Kosumo,” meaning “cosmo.” It can also be read as Sora (meaning sky), Tera (meaning terra), or Āsu (meaning Earth).

夢 (yume) means dream, and 希 (ki) means “hope” in Japanese. Since 夢希 looks like dream and hope, this name is pronounced as “Naiki (meaning Nike).”

There is a famous story that some people believe is the beginning of the キラキラネーム (kirakira nēmu) movement. Some parents wanted to name their son 悪魔 (akuma), meaning “demon.” They thought if the boy had this name, he would get attention, and people would talk (badly) about it. The parents wanted the boy to grow up using these negative feelings to be a strong man. The administration rejected this name registration because they thought that the boy would have a tough life due to this name.

キラキラネーム (kirakira nēmu) can be good for specific names since they are easy to remember. However, using unique names became an issue because this can cause bullying in school. Many people also think that the parents must be strange. Some children have legally changed their name after becoming adults.

Instead of キラキラネーム (kirakira nēmu), some people use old-fashioned Japanese names, such as: