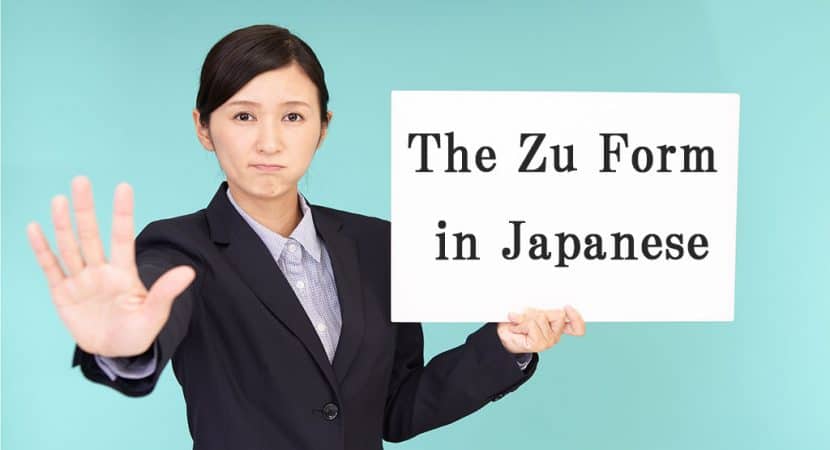 At some point in your Japanese-learning journey, you’re bound to stumble on zu form verbs. Don’t worry—if you’ve learned basic Japanese verb conjugations already, this is easy to pick up!

What is the Zu Form?

The zu form is similar to the nai form. They mean the same thing: both are ways of creating negative forms of verbs. They’re also conjugated similarly. If you know the nai form, you’ll learn the zu form easily.

The nai form is the standard negative verb form in modern Japanese. There are two ways to make it, depending on whether you’re conjugating an う-form verb or a る-form verb. For an う-form verb, change the last syllable to its あ-row equivalent and then add ない:

Not too hard, right? る-form verbs are even easier. Just remove the る at the end and add ない:

The zu form follows the same conjugation pattern as the nai form. You can create it by taking the nai form and replacing ない with ず:

The one exception is the irregular verb する (suru, to do). In the nai form, する conjugates to しない (shinai). However, in the zu form, it’s せず (sezu).

Luckily, the other irregular verb, 来る (kuru, to come), is less weird! For this one, follow the usual strategy: remove the ない from the nai form 来ない (konai) and add ず to get 来ず (kozu).

How to Use the Zu Form

If the zu form is so similar to the nai form, why are there two of them? How do you know which one to use?

The nai form is the standard negative verb form in modern Japanese. It’s the one you’ll hear and see most often in daily life. You should default to this form for negative verbs.

The zu form, in contrast, is from classical Japanese. Centuries ago, it was the go-to negative verb form. Over time, it fell out of common use; nowadays, it’s almost archaic…

That being said, it is still used in daily conversations by native speakers.  If you work in Japan, you will probably hear it pretty often in the workplace.

The zu form grammar pattern that’s common in everyday life is the ずに (zu ni) pattern. In this pattern, you take a zu form verb and add the particle に (ni). This turns your verb into a phrase meaning “without ~ing.”

The ずに pattern is common in written Japanese. It’s a little rigid and formal for daily conversation, but you’ll probably hear someone say it if you are in Japan.

If you’re looking to express “without ~ing” in speech, use the more colloquial ないで form instead:

The ず (Zu) Pattern Without the に (Ni) Particle

You’ll still hear people saying the zu pattern without the に (ni).  Taking the example above you could take out the ni particle and say this:

If you take out the に particle, the meaning is pretty much the same.  HOWEVER, you may notice that the “何も (nanimo) is also missing.  This is the key.

If you were to put a word (object) in FRONT of the “omowazu,” this means that the “omowazu” verb is acting on that word. Let’s look at the sentence with 何も (nanimo) one more time.

What is she not thinking of?  She is not thinking of 何も (nanimo – anything).  In this case, we need to put a に after 思わず so that sentence says “She said it without thinking about anything.”

This can be a little confusing, so let’s look at another example:

There is an object (the recipe) in front of 見ず (mizu).  So you need to put a に particle in there 見ずに.  The person in this sentence will cook without looking AT the recipe.

This sounds confusing?  Which one should I use?

Most of the time using the zu pattern, you will say that you did an action without doing something.  For example, “I left home without eating breakfast.”  Or, “John took the test without studying at all.”  All of these sentences would need the に particle.  So the majority of the time, you’ll use the に particle.

Other Uses of the Zu Form

The ずに (zu ni) pattern is the most common way you’ll hear or see the zu form in everyday life, but it occasionally pops up in other contexts too.

Classical Japanese is the precursor to modern Japanese (similar to how Old English is the precursor to modern English; in both cases, the languages are closely related, but with some noticeable differences that make it hard for modern speakers to understand the archaic language). It was also the standard written language in Japan until the mid-1800s. If you’re reading any historical text, from laws to literature, you’re very likely to come across zu form verbs. You also may hear it in faux-historical language, like in a period drama or samurai movie.

It also occasionally appears in modern Japanese. Because classical Japanese was the primary written language in Japan for so long, it’s strongly associated with literature; some authors incorporate its elements, including zu form verbs, into their prose to get that literary vibe. You may also hear it in very formal speeches, where scholarly rhetoric is appropriate.

The zu form is also relatively common in poetry. Because the zu form has a different number of syllables than the nai form, it offers more options for fitting a verb into a set rhythm like the 5-7-5 syllable pattern used in haiku.

Finally, the zu form sometimes appears in idioms, which often use archaic language. There are also a handful of advanced grammar patterns that use the zu form; if you’re aiming to reach N1 level on the JLPT, you’ll find yourself studying a few of these. You can learn these types of set phrases via memorization, but recognizing the grammar behind them will make it a lot easier to remember them!

You’ve probably noticed that these occasional uses are mostly about style rather than meaning. You could use the nai form for many of these, but using the zu form allows you to create language that sounds more formal, more old-fashioned, more scholarly, or more poetic; it lets you play with style in a way that goes beyond everyday language.

Having a variety of linguistic options like this is part of what makes Japanese such a rich and nuanced language. But that doesn’t have to mean it’s hard to understand! As a rule, if you remember that the zu form is a negative verb form, just like the nai form, you’ll be able to figure out almost any sentence that uses it.