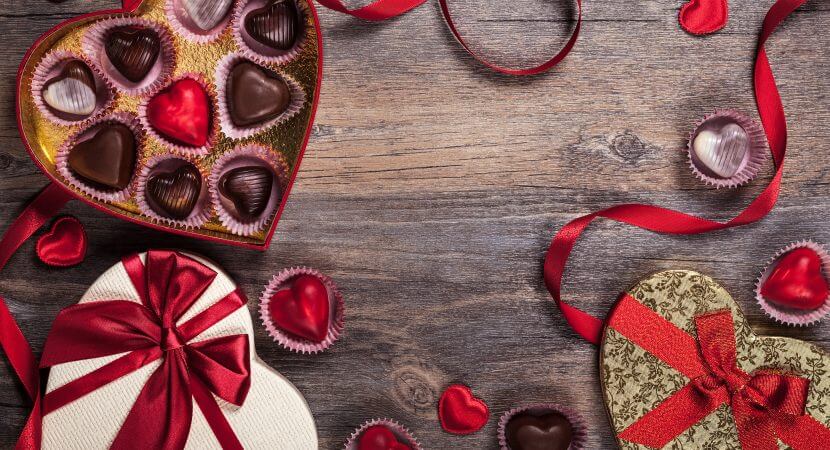 Valentine’s Day is celebrated all over the world. Customs vary from place to place, but it widely recognized and with similar traditions. While the Japanese way of celebrating Valentines is quite different to how we recognize it in the west, there is also the added complication of White Day.

White day takes places on March 14th (exactly one month after Valentines) this festival is an unusual addition to the romantic season.  Far from being fun, these two holidays can be the grounds of a multitude of problems if you don’t know the traditions.  This article will tell you everything you need to know so you can avoid making a blunder when Valentine’s Day swings around.

In England, Valentine’s Day is an occasion for lovers to show their appreciation for each other in the form of flowers, chocolates, cards and gifts. Candlelit dinners are the norm for a romantic evening, and popular restaurants can book out months in advance for this event.

In America too, Valentine’s Day is a mostly commercial event – an opportunity to spend money on your loved one or to pen a flirtatious message to someone you secretly admire.

While the celebrations are usually reciprocal, in heterosexual relationships it is often assumed that the male will be doing most of the present buying.

The first and most noticeable difference between Valentine’s Day in Japan and the West is that, in Japan, only the women give gifts.

This is not a reciprocal event where partners exchange presents, but a day when women shower their man with gifts. And not only their man – it is traditional (and even expected) for a woman to give gifts to her colleagues and male friends, as well as to any man that she has a physical relationship with.

But what about a man who she is not yet dating but who she has a crush on? How does the recipient know that his gift means more than just observing the tradition?

This is where it gets complicated.

On Valentine’s Day, the usual gift for a woman to give is chocolate – but not just any chocolate. There are specific types of treats which a woman can buy on Valentine’s Day which signifies different things. Pretty confusing!

There are two types of gifts that a man will usually receive on Valentine’s Day in Japan. The first is giri choco (義理チョコ) which translates as “obligation chocolate.”

As the name suggests, this is not a candy that you’ll be giving to your nearest and dearest. Rather, it is a type of chocolate that you offer to men who you are not romantically involved with, such as your male friends, classmates or colleagues.

These may even be people that you don’t even particularly like, but that is beside the point.  In Japan, tradition is of the utmost importance, and with things like this, people tend to “go by the book”, even if that means forking out and buying gifts for people you don’t like.

The other type of chocolate a man might be lucky enough to receive on Valentine’s Day is honmei choco (本命チョコ). This means “true feeling chocolate, ” and you won’t be giving this to just anyone – it is expensive, high quality, and embodies the traditional feelings of love and desire that we associate with Valentine’s Day in the West.

It is also popular for women to hand-make their own chocolates for Valentine’s Day. Again, this can get a bit confusing because you’d assume that the intricately, beautifully hand-crafted chocolates would be destined for your “true love,” but it’s not always the case.

As honmei choco is quite pricey to buy and usually has a good brand name on the label, this is seen as the more desirable form of a gift.

Buying all the equipment and spending hours of your time making the Valentines chocolates may seem like the more romantic gesture, but many women actually buy the expensive chocolates for their lover and then give the handmade ones away as giri choco.

However, the most confusing thing is that this is not a hard and fast rule – as the gifts are not given with a clear indication as to whether they are giri choco or honmei choco, there is great potential for crossed wires and misunderstandings if people think the chocolates mean something that they don’t!

So What About White Day?

So where does White Day fit into all of this? Well, seeing as Valentine’s Day is all about women giving chocolate to men, it is reasonable that the women expect to get something in return.

On March 14th, men repay the women who gave them gifts by showering them with chocolates. Again, the chocolates take the form of either giri or honmei depending on their romantic attachment, and it is perhaps a little easier to work out the meaning as men almost always buy the presents rather than hand-making them.

Around Valentine’s Day, supermarkets and 100 Yen stores are stuffed full of little tinfoil wrappers and heart shaped decorations for making your own candy, but around White Day, all you can buy are the ready-made products.

One down-side of White Day (for me) is that they are expected to spend far more on their gifts than the women do a month earlier. Regardless of whether the man received a cheap or expensive type of chocolate from his partner, colleague or friend, when White Day comes around he is expected to spend up to three times as much on the reciprocal gift.

If a Japanese worker has to repay chocolate gifts to all of his female colleagues, this can end up being quite costly.

Knowing this, it is hardly surprising that many Japanese men are not in favor of these traditional celebrations.

In a recent survey which questioned young Japanese men about their opinions on “obligation chocolate,” 37% of them said that they’d rather not get the chocolate.

With such a hefty price tag to repay this meaningless gift, it’s unsurprising that they would prefer to give it a miss. Out of those asked, more than 50% said that they just didn’t care either way – if they arrived to work on Valentine’s Day with empty desks, they wouldn’t be bothered at all.

Going along with outdated traditions and putting up with things that you aren’t really keen on is commonplace in Japan.

How many Japanese salarymen get roped into frequent overtime just because it’s seen as the right thing to do, and how many housewives get sucked into the super-mommy contest of making kawaii chara-ben (cute bentos for children) because all the other moms do it?

So while it looks like the modern Japanese man isn’t so keen on the giri choco gifts, it’s unlikely to actually buck the trends in any major way. To receive such chocolates and not return the favor would be a major no-no for any conscientious worker.

Strange as it seems to us in the West, White Day is very much a part of Japanese culture.

It is also celebrated in Korea where they go one step further and turn it into a romantic holiday trilogy with Black Day on April 14th. If you haven’t been so lucky on the chocolate frontier, Black Day is for you.

This is the festival where singles lament their lonely love-life and tuck into a bowl of black bean paste noodles. Unlike the cute chocolates associated with the February and March holidays, Black Day noodles look fairly unappetizing and far from romantic.

Valentine’s Day has been celebrated in Japan since the 1930’s, although it was originally introduced with the aim of facilitating the customs of foreigners who had exchanged gifts back home.

Eventually, it caught on with locals, and it was in the 1970’s that someone came up with the bright idea of creating different chocolates with various meanings behind them.

We may scoff at the structured nature of so-called romantic gift giving, but remember that floriography was very popular in the nineteenth century in both America and Victorian England.

Sending a romantic bunch of flowers was once a complicated business – without consulting a manual on “the language of flowers,” combining the wrong flowers together in a single bouquet could result in something impolite, or possibly indecent.

So maybe the Japanese tradition of imbuing their chocolates with various meanings is not so far-flung after all.

Like it or not, Valentine’s Day and White Day are major operations in Japan. While some companies will shy away from these complicated gestures of obligation, others will expect participation from all staff.

If you’re unsure, have a quite word with a colleague of the same sex to see what they usually do, and follow suit.

How do you celebrate Valentine’s Day in your country? Do you have any customs that are even crazier than White Day and Black Day? Leave us a comment and let us know!