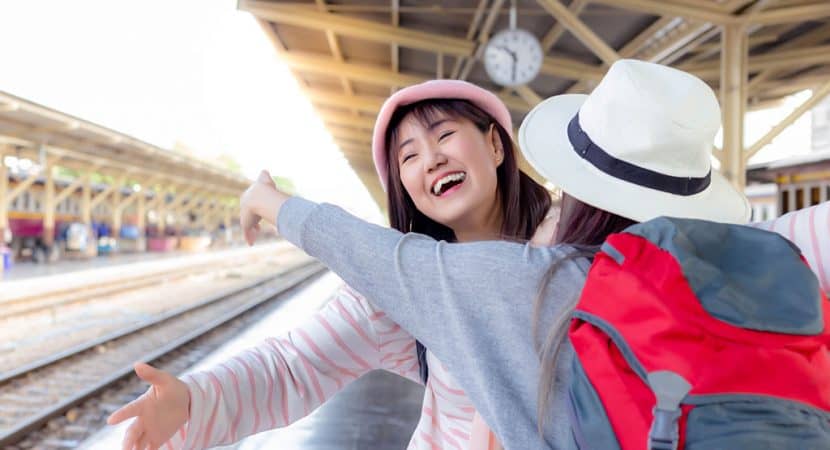 “お久しぶり！ (ohisashiburi!)” or “久しぶり！ (hisashiburi!)” is a common Japanese greeting that is said whenever you haven’t seen someone in a long time. This short but convenient phrase is equivalent to English phrases like “long time no see!” or “it’s been a long time since we’ve seen each other.”

Let’s take a look at how to use お久しぶり naturally in both formal and casual situations, as well as its different usages.

This word also has different levels of politeness depending on who you are talking to:

Who It’s Used With:  Since 久しぶり (hisashiburi) is the casual version, you would use this only with people you know well, like close friends or family. It could also be used with people of lower social status than you (children, 後輩 (kōhai)*, etc.)

*Note:  後輩 (kōhai) means “junior.” This refers to someone with less seniority than you at work, school, or even social/sports clubs.

久しぶり (hisashiburi) can also be used as an adverb in a sentence, which we’ll go over in detail later in this guide.

The only difference between this semi-casual word and the very casual word above is the honorific お (o):  お久しぶり (Ohisashiburi) vs. 久しぶり (hisashiburi).

Who It’s Used With:  お久しぶり also can be used with friends and family but makes it a little more formal and polite than 久しぶり. You can also use お久しぶり with people you are acquainted with but are not super close to, like coworkers or classmates.

Adding です (desu) to お久しぶり (ohisashiburi) makes this a much more formal/polite version. It is like saying, “It has been a while since we’ve met” in English.

お久しぶりです。
(Ohisashiburi desu.)
It has been a while since I last saw you.

Who It’s Used With:  This phrase is usually used with people you are not close to but have a similar social status. For example, coworkers or classmates you don’t know well or people you know casually (like people you see in the gym, cafe, etc.). This phrase is also polite enough to use with people like your immediate boss if you often work together and know each other well.

お久しぶりでございます (ohisashiburi de gozaimasu) is a very formal phrase. It is rarely used since the situations where this phrase is appropriate are very limited.

お久しぶりでございます。
(Ohisashiburi de gozaimasu.)
It has been quite a while since the last time we have met.

Who It’s Used With:  This phrase is reserved for people with a much higher social status than you, and you have some relationship with them (usually a casual relationship where you don’t know anything personal about someone). For example, the CEO of your company, business partners, or regular customers (customers in Japan are highly respected, as providing excellent customer service is essential).

All of the forms listed above are also used as a greeting (on its own).

3. お久しぶりでございます。その節**は大変お世話になりました。
(Ohisashiburi de gozaimasu. Sono setsu wa, taihen osewa ni narimashita.)
It has been a long time since we saw each other. Thank you very much for that time.

**Note:その節 (sono setsu) is a formal and common way to say “at that time.”

The word お久しぶり (ohisashiburi) itself means “a long time (not doing/having something)” and is mainly used in two scenarios.

When used as a greeting, お久しぶり (ohisashiburi) is usually the first thing you say to someone you haven’t seen in a while.

お久しぶり！先月、忙しくて会えなかったね。元気だった？
(Ohisashiburi! Sengetsu, isogashikute aenakatta ne. Genki datta?)
Long time no see! We were so busy that we couldn’t meet last month. How have you been doing?

2. Using 久しぶり (Hisashiburi) As An Noun/Adjective: With Nouns and Verbs

久しぶり (hisashiburi) can also be used to describe something (noun or action) you haven’t experienced in a long time.

A: 先週さ、やっと沖縄に行けたの！
A: (Senshu sa, yatto Okinawa ni iketa no!)
A: You know, I finally could go to Okinawa last week!

B: いいね。久しぶりの旅行だったね。
B: (Ii ne. Hisashiburi no ryokō datta ne.)
B: Nice. It’s been a long time since you traveled.

B: うん、久しぶりの日本料理だったもんね。
B: Un, hisashiburi no nihon ryōri datta mon ne.)
B: Yeah, it has also been a while since you ate Japanese food, right?

The best way to see how this is used is through examples.

1. 一緒に宿題をやるのは久しぶりだね！
(Issho ni shukudai o yaru no wa hisashiburi da ne!)
It’s been a long time since we did homework together!

2. 海に行くのは久しぶりですね。
(Umi ni iku no wa hisashiburi desu ne.)
It’s been a while since we went to the sea.

How Long is a Long Time?

You are probably wondering, “what amount of time is a long time?“

This is completely subjective and varies from person to person. For some people, a few days is considered a long time, while others think a few weeks or months is long.

久しぶりに (Hisashiburi Ni): Using Hisashiburi as an Adverb – It’s Been A While Since ~

If you use 久しぶり (hisashiburi) together with a particle に (ni), it means “doing something for the first time in a while/long time.” This is the adverbial usage of 久しぶり.

Please note that only the adverb 久しぶり (hisashiburi) – no honorific お (o) can be used.  お久しぶり (ohisashiburi) cannot be used in this case, as it is only used as an expression/greeting.

1. 彼は久しぶりに母に電話をした。
(Kare wa hisashiburi ni haha ni denwa o shita.)
He called his mother for the first time in a while.

2. 久しぶりに休みを取ったので、旅行に行くことにした。
(Hisashiburi ni yasumi o totta node, ryokō ni iku koto ni shita.)
I took some days off for the first time in a while, so I decided to travel.

3. ご無沙汰 (Gobusata) Another Way to Say Long Time No See/Hear in Japanese

無沙汰 (busata) can be translated as a “time of long silence” or “not contacting (someone) for a long time” in English. However, its usage is very specific in Japanese and differs from 久しぶり (hisashiburi) in the following three ways:

Let’s look at a few examples of using ご無沙汰 (gobusata), starting with the most casual usage and then moving on to the formal expression.

1. 三年間のご無沙汰でしたが、お元気でお過ごしでしたか？
(San nenkan no gobusata deshita ga, ogenki de osugoshi deshita ka?)
We haven’t contacted each other for 3 years, but have you been doing well?

3. 大変ご無沙汰しております。マルイ社の田中です。
(Taihen gobusata shite orimasu. Marui sha no Tanaka desu.)
I am incredibly sorry for not contacting you for a long time. I am Tanaka from Marui company.

Examples #2 and #3 are mostly used in written language and on very formal occasions. It would not be natural to use a phrase like ご無沙汰しております (gobusata shite orimasu) with people you contact often or in casual conversations.

For example, even if you haven’t seen or contacted your boss for a while, you wouldn’t use ご無沙汰 (gobusata) in an email to them. This is because you work at the same company, so saying “I haven’t written to you in a while” would sound unnatural.

On the other hand, you would use this phrase with a customer you have not contacted or responded to for a while. In Japan, businesses should always use formal and polite language like ご無沙汰 (gobusata) with their customers.

If you want to express that a certain period of time passed, you can use the following structure:

You usually use this structure to express that a certain amount of days, months, or years have passed.

Using 久しぶり！(Hisashiburi!) As a Joke

The phrase 久しぶり！ (hisashiburi!) can also sometimes be used jokingly, like when you say goodbye to someone but bump into them a short time later.

They part ways but meet each other again outside the school building.

お久しぶり (ohisashiburi) has different ways to be used in the Japanese language, so here is a table to summarize it all!