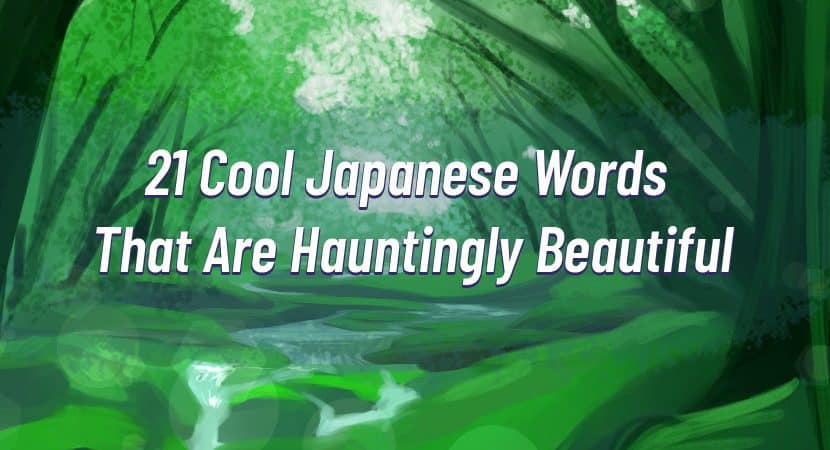 Some Japanese words are so succinct and deeply ingrained in Japan’s culture that they can’t be easily translated. This doesn’t mean you shouldn’t learn them. These are amazingly beautiful and cool Japanese words that often describe concepts that we don’t have in English. It will impress your Japanese friends too!

Let’s look at some of these words that offer a deeper glimpse into Japan’s language and culture.

Here are some cool Japanese words that have seasonal themes.

This refers to when the traditionally loved cherry blossom trees release so many petals that it looks like a snowstorm. You will find that many Yamato kotoba have a common theme of cherry blossoms. In Japan, the cherry blossoms represent transient beauty, love, and other such bittersweet topics.

Fuubutsushi is a specific sort of nostalgia. It occurs when a memory of a season or seasonal event is triggered. For example, the cry of summer cicadas might remind you of a particularly wonderful summer festival you attended. Every time the cicadas cry, you remember that festival. That is fuubutsushi. In Japan, where seasonal events are central to the culture, it is a poignant word indeed.

Sasame yuki is the finely powdered snow that falls in utter silence. It can also refer to the peaceful atmosphere that comes with such a snowfall.

The phrase oubaitouri is especially cool because it is a special kind of idiom called 四字熟語 (yojijukugo), or “four-letter idioms.” Each kanji of oubaitouri stands for a different type of seasonal spring flower.

桜 (ou) is the cherry blossom flower. 梅 (bai) is the plum blossom. 桃 (tou) is the peach blossom. 李 (ri) is called a Chinese plum in English, although its fruit tastes more like an apricot. What the phrase 桜梅桃李 means is that every person is unique, like a differently flowering spring bloom.

The Japanese word for cicada is 蝉 (semi). Semi shigure refers to the harsh cries of Japanese cicadas that are often so loud they can drown out a human voice, just like a summer rainstorm.

Japanese culture is deeply engrained with themes of nature. Here are some cool Japanese words related to nature.

Another four-letter idiom, kyouka suigetsu, refers to a beauty that is radiant but just out of reach, like the reflection of a full moon that shimmers on the water  (水月 – Suigetsu).   The first part of the kanji, 鏡花 (Kyouka), literally means “the flower in a mirror.”  Kyouka suigetsu can also havea a meaning of “profound beauty that can be felt, but cannot be expressed with words.”

Along the theme of water, utakata refers to something transient or fragile, just like a bubble about to burst on the water’s surface.

This cute phrase refers to a person’s smile as a freshly blooming flower.  The kanji character “花 (hana)” is translated as “flower.”  However, this phrase referred to a woman’s beautiful smile to that of a lily.

If you’ve recently fallen in love, people might say you’re glowing. That’s sort of what koi botaru means: a glow of love (恋, koi) from your heart that’s like a shining firefly (蛍, hotaru).  However, this Japanese phrase also has a nuance of “a love that has not yet been recognized by the other person.”

Do you know that moment after a downpour when everything feels extra quiet? That’s essentially what ame agari means. It’s the moment when the world is still after a rainstorm, a peaceful, tranquil silence.

Uraraka refers to the sort of day everyone wants to spend outside: the sun is shining, and there isn’t a cloud in the sky. It is a gloriously sunlit day that makes you feel tranquil and at peace.

The word ukifune likens an unreliable person or thing to a toy boat as it bobs across the water.

13.  花を持たせる (Hana O Motaseru) – Letting Someone Else Take the Credit

The practice of 花を持たせる is praised in Japanese culture. It is the humble act of letting someone else take the credit (or flower) for your accomplishment.

The rest of our list will relate to words about the spirit/mind, emotions, or Japan-specific cultures and traditions.

Ikigai is someone’s motivation, or more strongly, their very reason for existence.

一期一会 is yet another four-letter idiom. It has originated in traditional Japanese tea ceremonies as an idea that a prestigious meeting might only happen once. We must savor our encounters with people, for we don’t know when we might see them again.

The term omokage refers to a person or thing that leaves a very deep impression. Like a shadow cast forever on the heart, it remains a strong memory.

You might hear the phrase naresome most often at a wedding or reception. It’s often used to tell the story of the newlywed couple and refers to how their love began.

Yuugen is the concept of beauty that goes deeper than what’s seen upon the surface. It is a more profound beauty, one that is less material.

A popular word for dramas or plays, setsunai refers to the bittersweet ache of loneliness or heartbreak. It feels like it will never end, but you secretly prefer that it lingers.

Wabi-sabi is a concept central to Japanese Buddhism. It captures the idea that things are all the more beautiful for their imperfections or transience. Wabi-sabi plays a significant role in much of Japan’s art, traditions, and culture.

A Brief History of Japanese Words

To understand what makes a Japanese word “cool,” a small distinction needs to be made about which Japanese words are actually Japanese.

When Japan was first developing its written language and all the poetry and storytelling that came with it, China strongly influenced it. Japanese people initially used a version of the Chinese alphabet.

Words from this system still exist in modern Japanese and are designated as 漢語 (kango) words. Kango is also present in most kanji, where it exists as the “on-yomi,” or on-reading of the kanji.

When Japan developed its own language, it still relied heavily on Chinese kanji. However, a unique Japanese alphabet was added—what we see today as hiragana. This development of Japanese as a language occurred mainly during the Yamato Period, so its words are referred to as 大和言葉 (Yamato kotoba) or 和語 (wago). It makes up the kun-yomi, or kun-readings of kanji.

You can discern the difference between the on- and kun- readings because the Japanese kun-readings will sometimes have hiragana appearing after the kanji. Let’s look at the kanji for “read”(読) as an example.

Not all the words in our list will consist of kanji and hiragana. However, they are all Yamato kotoba in the sense that they reflect true Japanese culture and mindset. As with most Japanese art or poetry, Yamato kotoba often reflect themes of nature, seasons, or matters of the mind and soul.

What Are Your Favorite Japanese Words?

Thank you for reading this article on cool Japanese words! Are there any words that you love but didn’t find on this list? Let us know in the comments or via email! We would love to hear from you.