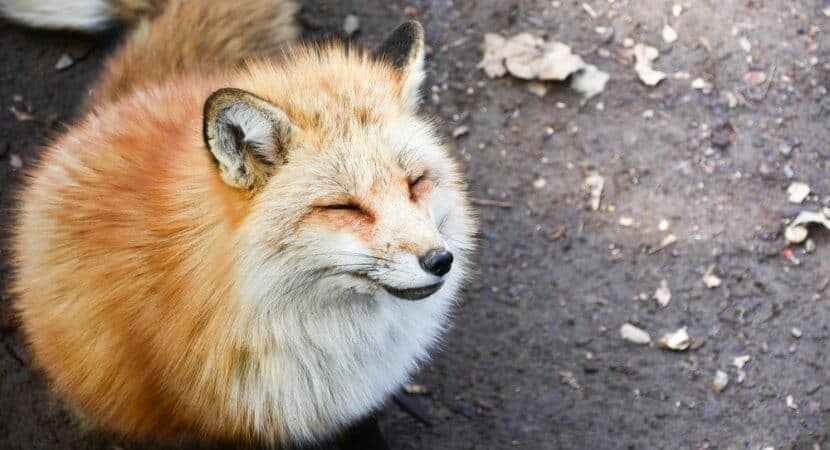 Surrounded by Cats, Bunnies, and Foxes:  A Taste of Cute Animal Islands in Japan

Japan’s animal attractions can be a hit or miss. Many zoos or animal-themed parks can be depressing to foreign visitors, featuring small cages and apathetic animals. Animals at many pet-cafes quickly become bored of the attention they receive from customers and are not interested in interacting with visitors.

For animal lovers or those who have been in Japan long enough to become pet-starved, there are a handful of options that allow you to enjoy getting up close to animals. 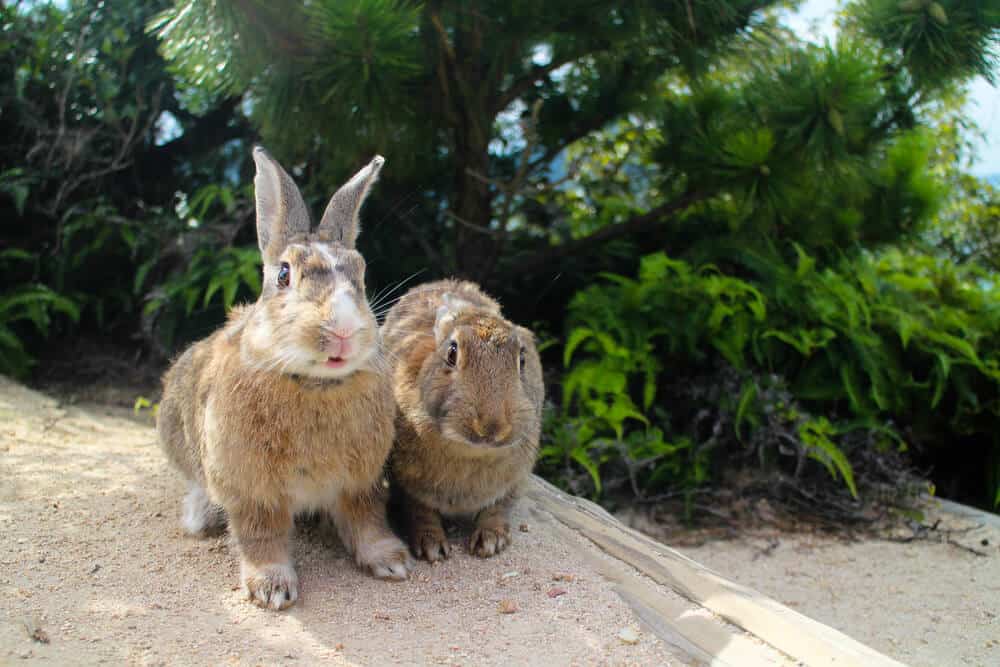 These animal islands in Japan might be what your are looking for.  The cat islands of Tashirojima and Aoshima, and the rabbit island Okunoshima, have large populations of feral cats and rabbits that roam freely on a predator-free island.

Zao Fox Village styles itself a fox sanctuary, devoted to preserving the fox species in its care. While these destinations are not intended as tourist destinations, they are all accessible to an adventurous traveler.

Cats are considered to be good luck in Japan, with beckoning cat statues (maneki neko in Japanese) thought to bring good fortune. There’s little wonder that there is not just one cat island in Japan, but thirteen. 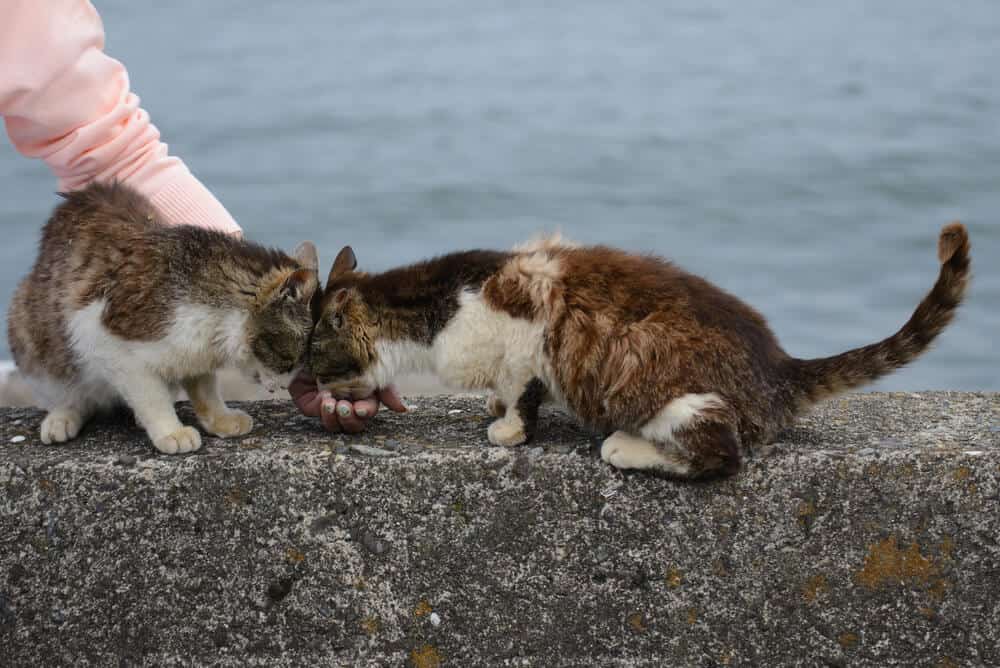 Tashirojima (Tashiro Island) is in Miyagi Prefecture, along with the Zao Fox village.

Aoshima is located in Ehime Prefecture and is one of the Japan Inland Sea Islands. Its neighbor, Okunoshima, is home to the bunny island in Hiroshima prefecture.

Tashirojima has a long history with cats. In the Edo-period, residents of Tashirojima raised silk worms as a source of income. The silkworm farmers brought cats to the island to prey on the mice that ate the silkworms. Over time, the cat population increased while the human population decreased.

Today, the cats outnumber the human residents six to one. Tashirojima cats have a relatively long history of attracting visitors. 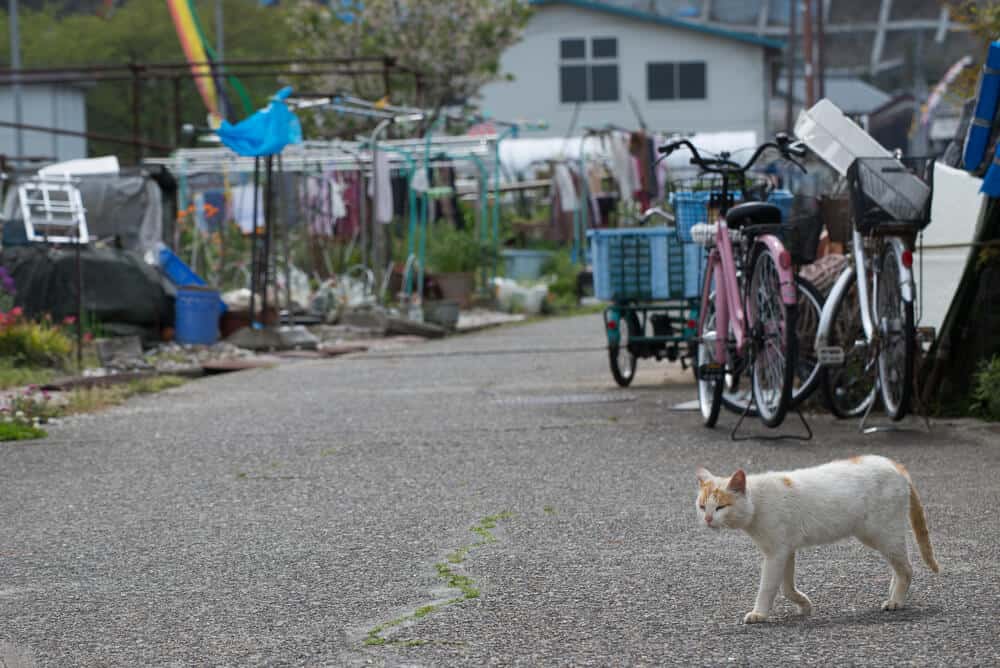 After a falling rock had killed one of the cats, fishers on the island constructed Neko-jinja, a shrine devoted to the cats.

In 2000, a tourist facility called Manga Island was built. Manga Island consists of cat shaped buildings where visitors can stay. Come prepared if you are going to stay, however! Tashirojima’s single grocery store is not open every day, so either stay at a guesthouse that provides meals or lackluster food with you.

Check out this video on the cat island of Tashirojima including a look at Manga Island.

Tashirojima is off the coast of Tohoku and was badly damaged in the 2011 earthquake, although surrounding islands protected Tashirojima from the worst of the tsunami.

To get there, travel to Ishinomaki station by train, then transfer to a bus bound for Ishinomaki Port.

Be very careful to double-check your travel arrangements at the official website of the shipping lines: Ajishima Line Website (Japanese only).

Aoshima has more recently rocketed to fame as a destination for cat lovers. Aoshima’s fishermen originally brought the cats to the island to keep the rat population down. Aoshima became briefly popular after WWII when many people sought a return to a traditional lifestyle, but the island could not sustain a large population. 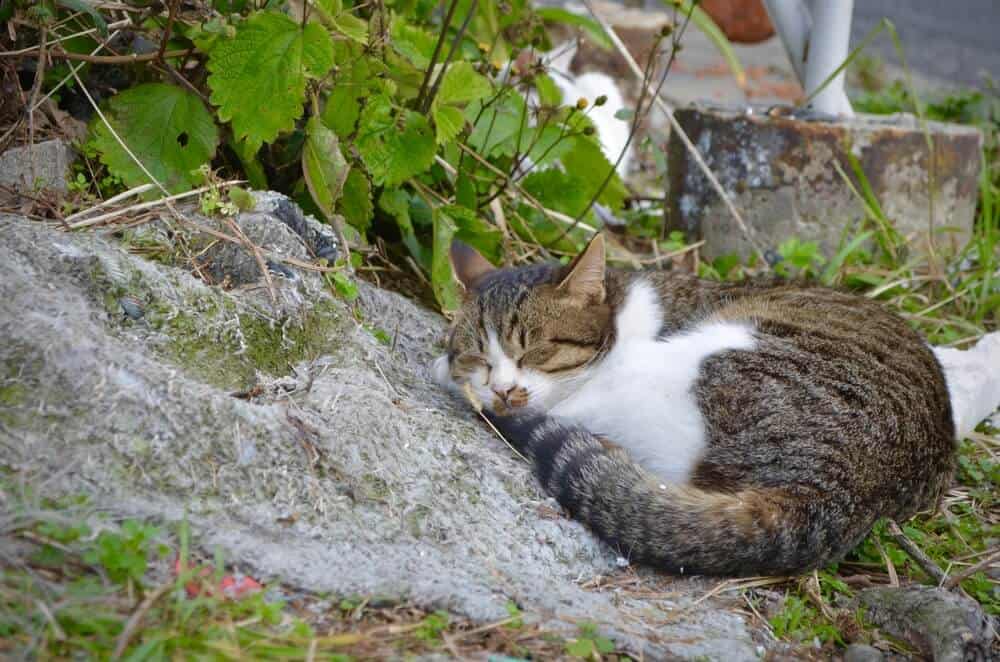 In 1976, the island’s only elementary school shut down, and Aoshima became progressively more abandoned. Today, the cats roam freely throughout abandoned houses, the school, and temples, keeping a watchful eye on the visitors.

Here’s a short video showing all of the cats on Aoshima.

There are two boats daily, but the boats of interest to tourists are the morning departure to Aoshima at 8:00, returning at 16:15 (4:15pm).

Due to the popularity of Aoshima, tickets for these boats sometimes sell out. If this is the case, consider visiting Muzukijima. This orange producing island is home to orange colored cats and is a ferry ride from Mitsuhama Port.

Aoshima residents have put together some requests for visitors to their island. Once you disembark the boat, keep moving briskly along the dock. Feed cats only at the designated feeding site, near the community center. If you’ve brought more food than the cats can eat, place it in the cat food containers at the community center or the waiting room for the ship. There is a donation box in the ship, and the money raised is used to care for the cats.

Finally, residents request that you respect their homes and don’t enter their houses unless invited and take your rubbish away with you. Aoshima is not a tourist destination, so there are no restaurants on the island and nowhere to stay. Instead, you should look for a hotel near Nagahama port and make a day trip of it. The closest hotel to the port is Ryoutei (Japanese only).

Okunoshima: Cute Bunnies on an Island with a Chilling Past 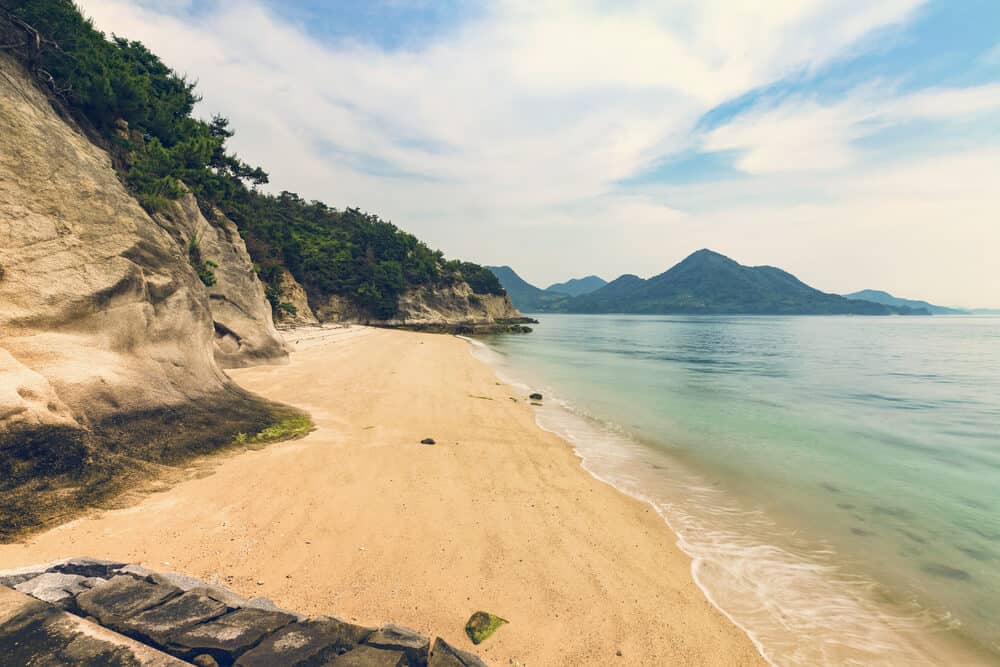 The number of rabbits on Okunoshima is unclear, as the feral population is left to breed freely.

What is clear is that the rabbits are incredibly cute and totally unafraid of the tourists who come to see them. They will approach visitors offering them fruit and vegetables, and in some cases, even follow or climb on them. 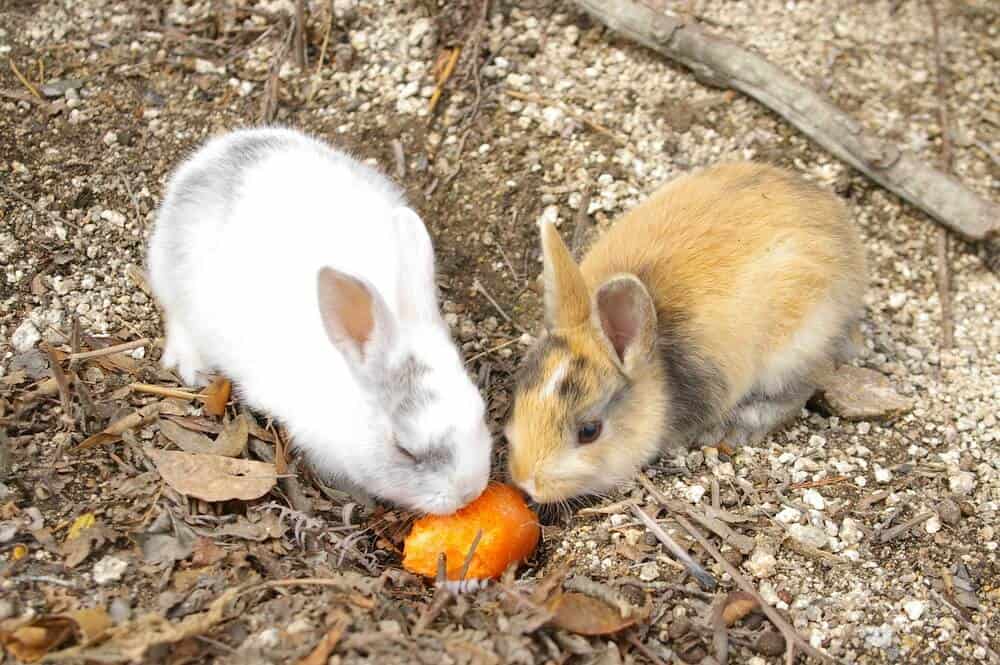 Okunoshima is a predator-free zone for rabbits, with cats and dogs banned. While this doesn’t deter the tonbi, (a species of hawk-like birds native to Japan) from circling the island, for the most part, the rabbits are left in peace to graze wherever they please.

The History of Okunoshima

In sharp contrast to the cuteness of the rabbits is Okunoshima’s secret history.

From 1927 until the end of WWII, Okunoshima was home to a chemical munitions plant, making and storing mustard gas and tear gas. The plant was so secret that Okunoshima was erased from maps.

Residents and employees were not told what the factory was producing with the result that many became sick. A colony of rabbits was brought in to test the efficacy of the plant’s chemical weapons, starting the island’s association with rabbits. 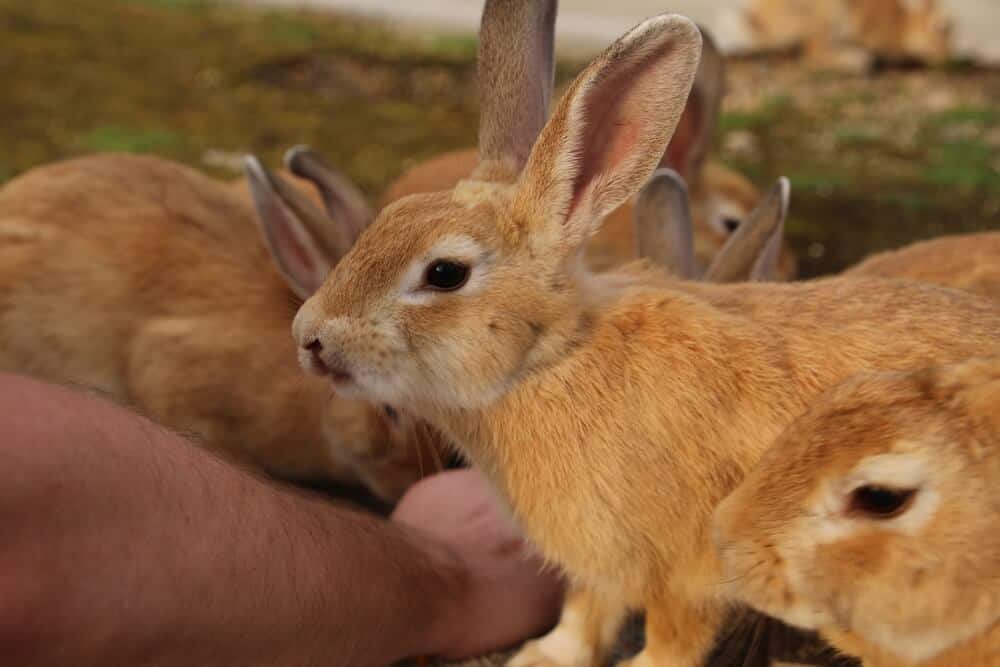 With the end of WWII, the plant was closed, the chemical weapons disposed of, the rabbits killed and a policy of silence maintained until 1988 when Okunoshima’s Poison Gas Museum opened to warn people about the dreadful danger and legacy of chemical weapons. 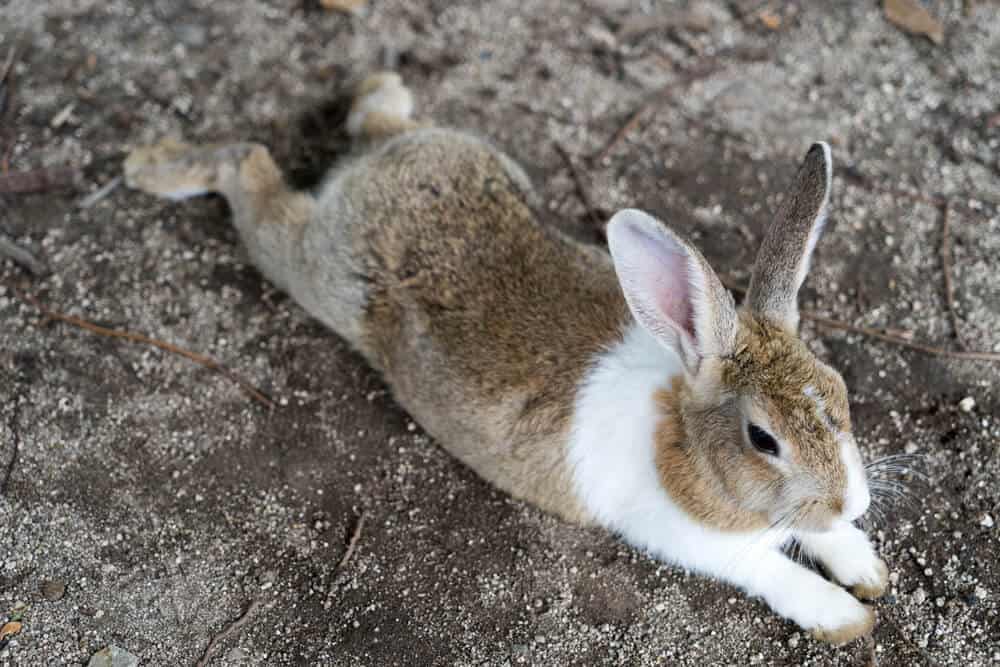 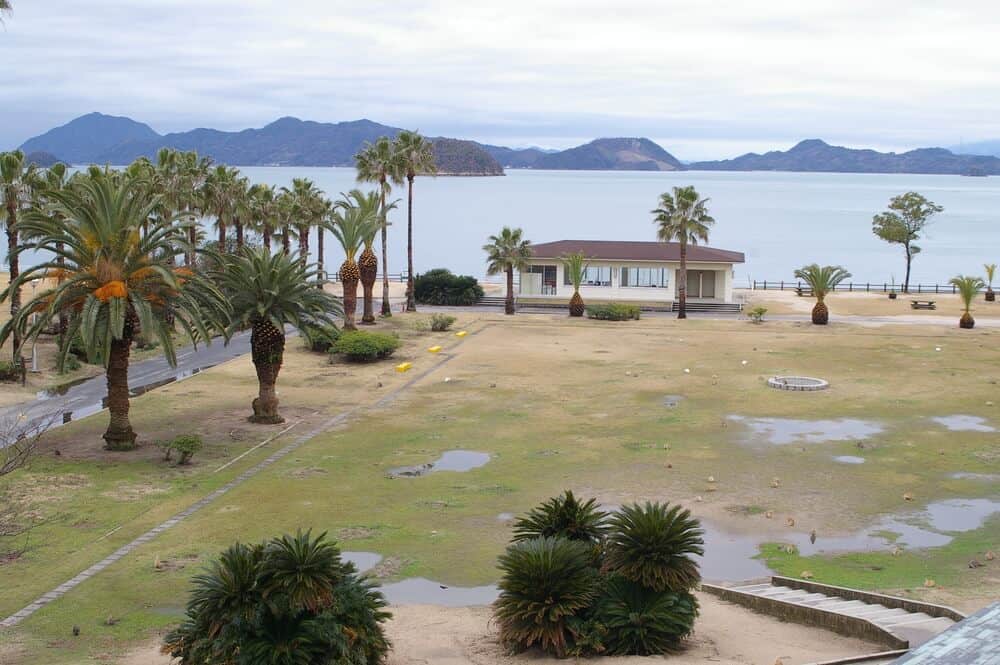 It is not uncommon to see rabbits with injuries but don’t be alarmed. The males especially fight amongst themselves—think Watership Down.

Check out this video about the Rabbit Island of Okunoshima.

There is no charge to enter Okunoshima.

In addition to the Gas Museum and former munitions plant, there are ruins of old forts dotted all over the island. There are not safe to enter but are striking visual reminders of the island’s past. For more information, check out the island’s official website.

The island is part of the Japan Inland Sea, located near Takehara-city in Hiroshima prefecture.

To get there take the train to Tadanoumi and switch to the ferry. The earliest ferry leaves Tadanoumi at 7:30 and the last ferry departs the island at 16:13 (17:13 only during February-October).

There is a hotel and a camping ground on the island, and you can play golf, swim, or hire a bike and cycle the island, but besides the rabbits, Okunoshima’s attractions are rather lackluster.

Unless you really love rabbits, a day trip will be sufficient. I recommend you buy vegetables and fruit to feed the rabbits before arriving on the island. While there is rabbit food for sale there, it is rather expensive.

Zao Fox Village: A Magical Encounter with Creatures of Myth

The fox is known in Japanese folklore as messengers of the god Inari, or as shape-shifting tricksters.

Now, thanks to the efforts of the Zao Fox Village, foxes are leading the way in cute, too. 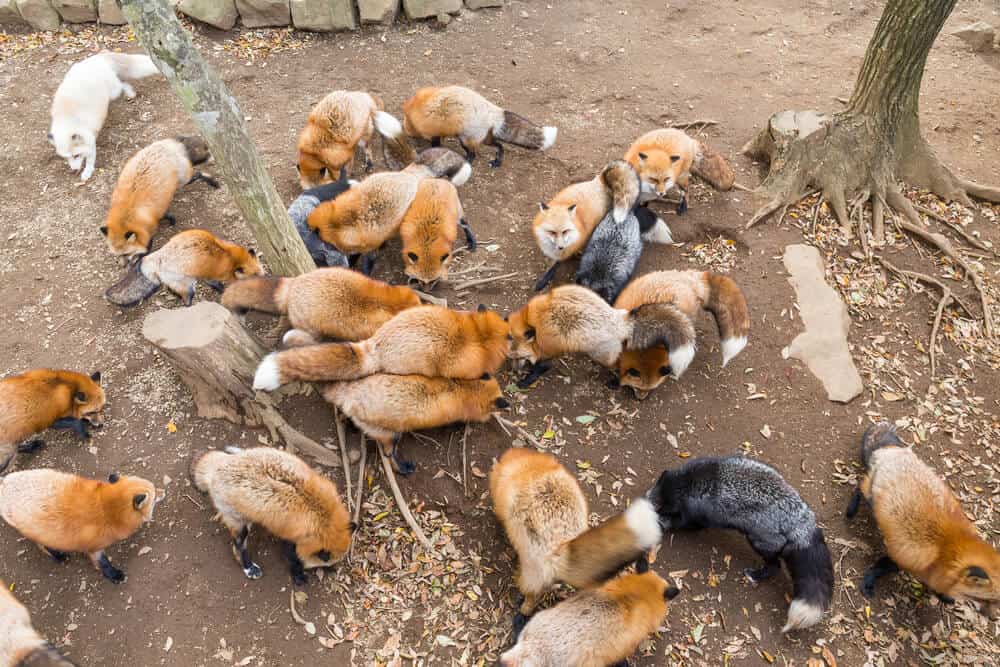 What began in 1990 as a sanctuary for foxes has now become—like the cat and rabbit islands—a tourist attraction. People come to photograph six species of fox relaxing in the beautiful mountains surrounding Shiroishi City in Miyagi Prefecture.

Check out this cool little documentary about this wonderful village.

When you first arrive at Zao Fox Village, you’re greeted by an immense gorilla statue. Don’t despair—you’re in the right place! The gorilla is a relic from the village’s past as an amusement park. Make your way through the entrance where you have the opportunity to purchase bags of food for the foxes.

A Little Warning:  Don’t Bring Your Own Food

The bags of food you purchase on the island is the only food you can feed to the foxes. You may be asked not to take any other food into the park. This is for your protection as well as the foxes—they can smell the food in your bag, and may attempt to steal it! Also be careful not to have anything dangling from your clothes or bag that might provide a temptation for the foxes. Some unfortunate visitors have seen their cellphones stolen by the foxes! 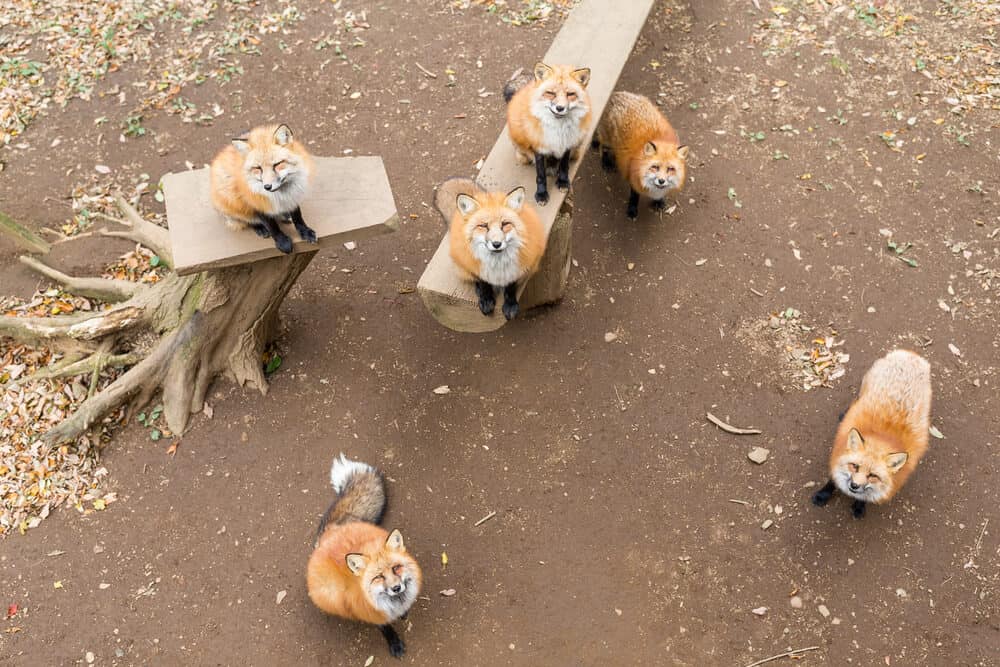 When you first enter the village, you find yourself in a petting zoo like section, with a variety of domesticated animals, including miniature horses, goats and bunnies. There are a few foxes in cages, recovering from injuries (the foxes are wild and occasionally get into fights).

There may be opportunities to take photos holding a fox. This is the only time during your visit that you are allowed to touch the foxes. There is information displayed about the foxes, but most visitors rush through, eager for the main event—the large enclosure where the foxes roam freely. 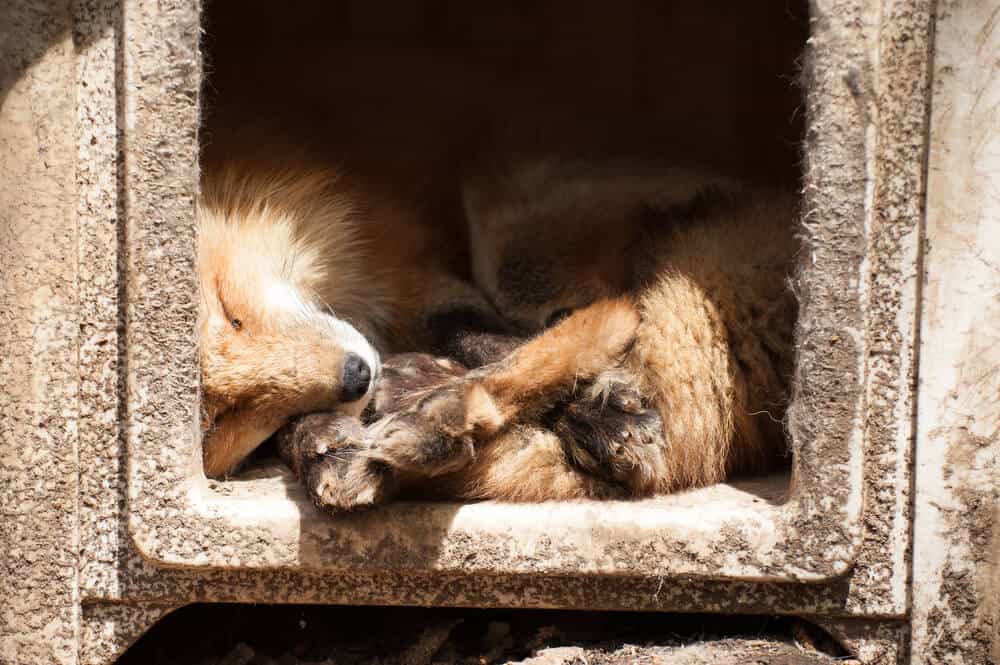 Once you enter the enclosure, you are entirely surrounded by foxes. Sanctuary may be a bit of a misnomer—all of the foxes were artificially bred to guard against the spread of Echinococcus (a type of tapeworm).

However, the foxes are wild animals and should be respected as such. Feed them only from the designated feeding platforms, and make no attempt to pet them. 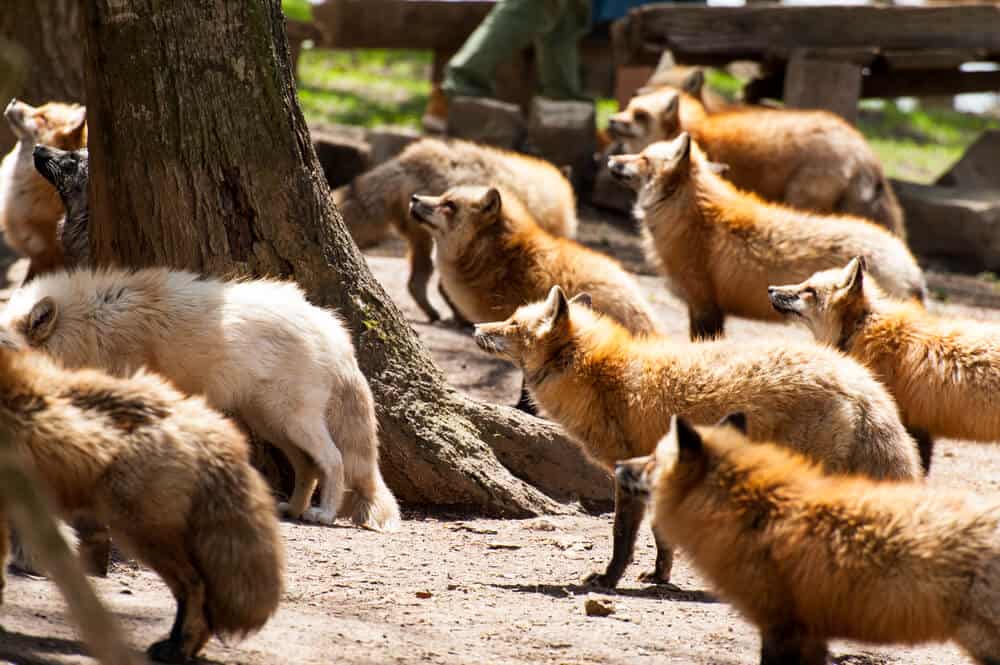 These rules sound obvious, but once you’re in the village, surrounded by peaceful, sleeping foxes ripe for photographing, the rules become easy to break. Especially with a curious fox following you as you explore the forest and shrine, it will all feel worthwhile. 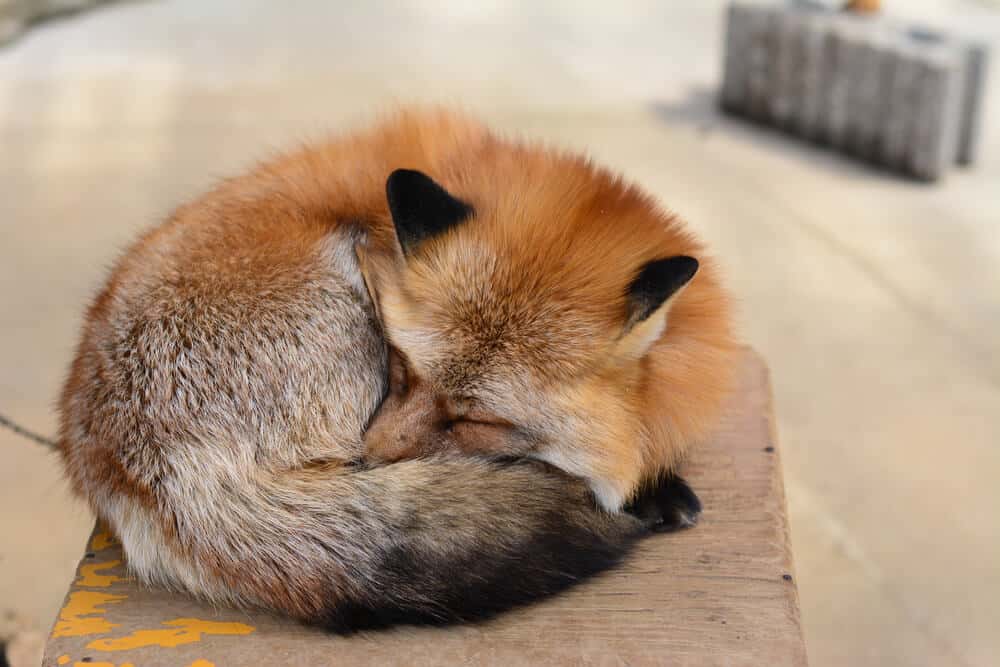 The village is open year round from 9:00 A.M.-5:00 P.M., except during the winter period (November 9th-March 19th) when the village closes at 4:00 P.M. For more information, check the official website.

The entrance fee is 1000 yen for adults (twelve years and over). It is recommended that younger children aren’t brought to the park as the foxes aren’t tame.

To reach Zao Fox village, travel to Shiroishi Station on the Tohoku line. From there, you’ll need to take a 20-minute taxi ride to the Fox village (about 4000 yen each way).

Be sure to bring enough cash, as Zao Fox Village is quite remote and there is a lack of ATMs and cafes.

Cats, rabbits or foxes—it is a tough choice! All of these animal island in Japan are awesome.  While the foxes may have a slight edge in photogenic qualities, you can pet the cats and the rabbits.  My recommendation is to visit all of them, but that is just me! Which is your must-visit site? Share this article with a friend or leave us a comment below!