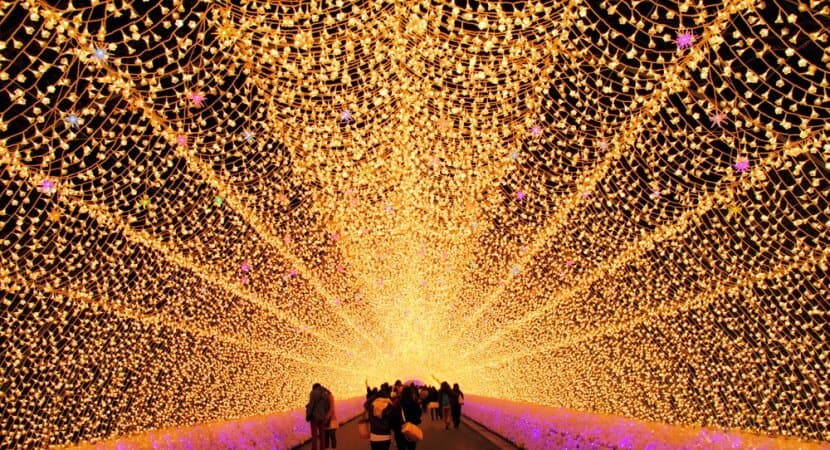 Japan may not be the place you associate winter travel with, but then again, does anyone associate the word “winter” with “travel”?

I think of winter, and I think of several heavy blankets, made into a mountain-shaped pile under which I remain for four solid months with my laptop, streaming Netflix.

My parents are so proud.

If I have to travel somewhere in the frigid months, though, it may as well be somewhere that has a lot of shiny, pretty things to distract me from how cold I am, and Japan has just that (is there anything it doesn’t have?).

During the winter months in Japan, light shows and illuminations are on display to help set a magical, cheery mood.

Although December is seen as a time in Japan that’s often centered around the romance of Christmas, the illuminations aren’t only there for those who have paired up. Love is hard! Go it alone! And by “go it alone” I mean “go to the winter illuminations” sans partner, or with a group of friends who are as equally single as you are. Take that, companies profiting off of commercialized romance!

The displays aren’t limited to just Tokyo- these beauties are all over the country for all to enjoy.

Below is a list of some of the best that you can venture to. Better get glowin’!

I know, I know- I just got done convincing you that there are illuminations to see outside of Tokyo, and here I am, kicking the list off with one right outside of it. What can I say? I’m an unreliable narrator and I like to shock.

If putting this one first on the list leads you to actually going to this show, though, you’re going to thank me. This thing is crazy. It’s as if you died, and heaven ended up being a giant night sky and fields of multi-colored LED lights as far as the eye could see (roughly 600 million of them, no big deal).

About an hour outside of Tokyo at the Sagamiko Resort Pleasure Forest (I really wish I could take credit for making that name up), the event is one of the biggest illumination displays in all of Japan. Lights are spread throughout the whole place, which is an amusement park by day.

Some of the displays include a Christmas tree nearly fifty feet in height, a “Grand Tunnel of Light”, the “Forest of Light”, and others. So many pleasure spots! (Sorry, had to.)

Check out this video of the Sagamiko Illumination:

Every year, a winter light-up is held to honor the victims of the Great Hanshin Earthquake of 1995. This being the production’s 21st year, they’ve got the show down to a science. It’s a beautiful sight: each, tiny bulb is hand-painted, and they light up the winter sky. They were meant to stand as a reminder of the time after the earthquake when many survivors were left in darkness from lack of gas and electricity. The bulbs, with their strong light, became beacons of bright hopes in dark times (and I think we can all agree, the world has been feeling a little bleak as of late).

The Italian government donated the 200,000 bulbs, and the event’s name, Luminarie, came from the Italian word for illumination. Tourism boosted after the event started (it had been slumping after the earthquake) and now, on average, 4 million people come every winter to see the spectacular. A win for all!

The lights are illuminated for a few hours each night over the course of a couple of weeks. This year’s display will run from December 8th to December 17th, 2017. All of the illuminations on this list are beautiful, but there’s an added sense of poignancy and weight with this one, given the people and the message it’s honoring.

Check out this video to experience Kobe Luminarie for yourself:

If you happen to be in Tokyo and have time to pull yourself away from walking around Shibuya Crossings, looking sad and beautiful while pretending to be Scarlett Johansson in “Lost in Translation” (what, you don’t do that?), head over to Shibuya Ao no Dokutsu, aka the Blue Cave.

The younger illumination of the bunch (therefore it’s much hipper, vegan, and prone to taking 80 Snapchat selifes a day), the event only just made its premiere in 2014.

Stretching nearly half a mile along Koen-dori to Yoyogi Park, trees are shrouded in blue LED lights, making them look like hundreds of lit-up Groots (I am Groot).

If you don’t mind the crowds (and let’s be honest, there are always going to be crowds), this will make for some very pretty photographs.

And if you ever wanted to be effortlessly lit in a way that made you look like Sadness from the movie “Inside Out”, this is your moment.

Omotesando Illumination has a run this year from November 22nd to December 31st, 2017.

Check out this video about the Blue Cave Illumination:

Because it’s celebrating its 15th anniversary, the illumination team behind Osaka Hikari Renaissance wants to thank you (yes, you, reader) for all of the years of support. Wow, you didn’t even know you were so supportive and nice, did you?

Well, time to go claim your thank you gift, which comes in the form of not just the usual events this year, but five special programs created just for the occasion. Prepare to be dazzled!

The Art Festival of Light stretches from Osaka City Hall to Nakanoshima Park. The biggest draw is arguably the Wall Tapestry Show, which calls for a 3D projected video set to music that uses the Osaka City Public Hall building as its screen. Now we know where Motorola got their Insta-Share Projector idea from (it’s not going to happen, Motorola, your time is over, give it up).

Here’s a video of the 3D mapping show:

This year, other events will include the “Lantern Exchange Event”, in which about 1,000 lanterns from Tainan are exhibited to celebrate the Taiwanese Lantern Festival. Between this, the food stalls, and the light tunnels, you’ll be crying festive, happy snowflake tears by the end of your night there.

The Osaka Hikari Renaissance is running from November 12th to December 31st, 2017.

Check out this video for more information on the Osaka Hikari Renaissance:

In the warmer months, Nabana no Sato is a botanical theme park that showcases its flowers and gardens. Well, move over, warmth and flowers- it’s the season where everything dies and all is frigid and there is no place for you! Not until March, anyway. You can come back then.

In the winter, the park is spectacularly illuminated with over 8 million LED lights, which I’m pretty certain makes it viewable from space at that point. I think if we ever need to make contact with distant life forms, we can just make Nabana no Sato light up in Morse code (assuming the theoretical life forms know Morse code).

The display of lights is absolutely stunning (possibly literally). There is a famous Tunnel of Lights you can walk through, which is made up of roughly 1 million LED lights and stretches some 650 feet. You can also enjoy light shows and the park grounds, completely blanketed in colorful lights.

The park is quite vast, so after all of that walking, you can hit up the “foot bath” (I’m still trying to decide if that’s amazing or kind of gross) to warm up and soothe your muscles.
And don’t forget to hit up the Nagashima Beer Garden! What’s better than light tunnels and crisp, cold beer?

Nabana no Sato’s illuminations started up in October of this year, and are there to be enjoyed until May 6, 2018.

Check out this video to see what Nabana no Sato’s illumination is like:

How could I complete this winter-themed list without making any mention of Hokkaido, the northern part of Japan? That would be like making a list of classic American cinema, and not including the Fast and Furious saga. It would be a disgrace.

It’s worth noting that, having started in 1981, this illumination is the oldest one on the list (which means it’s a staunch conservative and prone to being grouchy). Spread out in the heart of Sapporo between Odori Park, Ekimae-dori, and Minami 1-jo dori, the festival is a must-see if you’re visiting Hokkaido in the winter.

During the winter months, there isn’t always a guarantee that there will be snow around Honshu, the main island in Japan, but in Hokkaido, snow is a promise. At this festival, you’ll more than likely be able to stroll around a snowy, picturesque winter wonderland while you soak up all of the gorgeous displays.

The illuminations in Sapporo are lit nightly from November 24th until March 14th, 2018.

Take a look at the video to see just how beautiful this illumination is:

Sapporo White Illumination Homepage (Japanese only.  Has an option to translate the page in English, but it often doesn’t work)

No matter where you go in Japan to catch the illuminations, whether they’re simple street decorations or gigantic displays, it will be well worth your time. So get yourself to one, grab a hot drink, and give yourself over to the warm glow of the lights and the festive spirit it conjures. Don’t worry- Netflix and a warm bed will be waiting for you at the end of the night.

Have you ever gotten to experience winter illuminations around Japan? Where did you go, and what did you think? Let us know in the comments below!