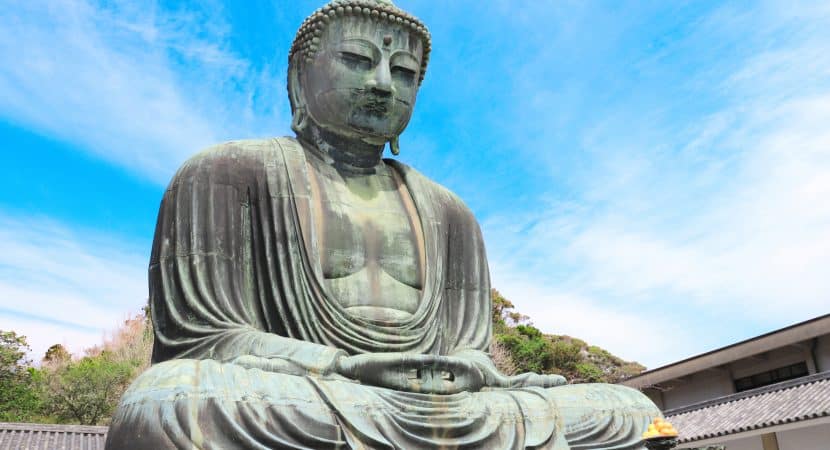 Buddhism is an exercise in spiritual development. The ultimate aim is achieving enlightenment through the practices of meditation and mindful living. Practitioners also strive to develop qualities such as compassion, wisdom, and awareness.

Enlightened beings experience life without rose-colored glasses, understanding that life—with all its beauty, trials, and tribulations—can be glorious. Buddhism teaches that by better understanding innate human nature, we can end needless suffering by altering our perception of situations and circumstances.

Buddhism is a faith or religion, based on spirituality. The teachings of the founder, Siddhartha Gautama (Buddha), who was born in Nepal in the sixth century BC., are not based on God per the Western Christian sense of the word. Rather, the foundational tenets are centered on a philosophy that leads to unconditional happiness or enlightenment.

Buddha taught that all human suffering can be attributed to negative states of mind and all the blessings we receive come from a positive state of mind. The basic tenets of Buddhism are love, kindness, and wisdom. Buddhism embraces the moral teachings of other religions but also teaches us we have a purpose through our very existence.

For a helpful round-up, this video is useful:

The Main Beliefs of Buddhism

The Four Noble Truths are the essence of Buddhism:

Buddha also taught that the “middle path” between self-indulgence and self-renunciation is the path to happiness. By living a life with compassion and love for all, we achieve liberation from selfish desires and a peace that is ultimately more fulfilling than anything we experience by indulging in pleasure.

This video goes over the Four Noble Truths in more detail:

The “middle” or Eightfold Path is the path to enlightenment or nirvana (a state in which any living thing is free from pain and sorrow). It is also the path leading to samsara, the painful cycle of rebirth or reincarnation.

The Five Precepts (Codes of Conduct)

The underlying principle of the Five Precepts in Buddhism is the avoidance of abuse to yourself or others. These precepts are the foundation of all Buddhist philosophies. When you have developed your ethical base, much stress and emotional conflict can be abolished, allowing for conscious choices and commitment to your path.

Free choice and intention are highlighted. There are no commandments in Buddhism, only choices that build karma. Each precept is a vow or promise to oneself.

I vow to abstain from:

Karma in Buddhism is explained through action driven by intention. These actions lead to consequences (cause and effect). When we mindlessly follow our actions, we are led to rebirth or reincarnation (samsara). But the Noble Eightfold Path leads to nirvana and shows us how to end samsara and attain enlightenment.

Siddhartha Gautama was a spiritual leader, philosopher, and teacher who was born in Lumbini, Nepal around the sixth century B.C. He is not considered a god and is the founder of Buddhism. The name “Buddha” means “the enlightened one” or “one who is awakened.”

According to popular belief, Buddha was born the son of a ruler in the Shakya warrior clan. His mother, unfortunately, died seven days after his birth. During the birth celebrations, it was predicted by Asita, a famous seer, that Siddhartha would become a great spiritual leader or a powerful ruler.

His father, wanting to protect him from a miserable earthly existence, built an opulent palace for the young Siddhartha to shelter him from hardship.

After mastering combat training, he won his wife Yasodhara in an archery contest. He was then married at age sixteen and had a baby soon after.

At the age of twenty-nine and itching to see outside the palace walls, he went out with his charioteer to explore. The tale goes that he first saw a sick person, then an old man, and then he encountered a corpse. All of these sights weighed heavily on his soul and he realized his status and privilege would not protect him from sickness, old age, or death.

The next morning he walked past a spiritual man deep in meditation on the street. In a flash of inspiration, he understood immediately that what he was seeking must be within the mind. That fateful meeting gave the future Buddha the initial taste of clarity and the realization that his path to peace and joy was to be found through spirituality.

The following day, Siddartha left his wife and son to follow his spiritual path. He was determined to relieve the universal suffering of humanity. He wandered for six years and found none of the existing religions or teachings acceptable.

One day he sat in deep meditation under a bodhi tree in Bodh Gaya in Bihar, India. During this meditation, which lasted 49 days, he realized the path to peace was through mental discipline. Upon completion of his meditation and from that day onward he was known as Buddha.

Buddhism utilizes varied rituals and practices, which are considered to help bring blessings to yourself and others, and assist in the journey to enlightenment.

Aside from meditation, the Mahayana schools of Buddhism created other forms of rituals and practices which were incorporated from religious cultures in India, Japan, China, Tibet, and Southeast Asia, these include:

A practice of focusing the mind to achieve mental clarity and an emotionally calm state.

The practice of speaking and repeating sacred words or verses that are considered to have spiritual powers.  Aside from enlightenment, other mantras are used for protection from evil psychic forces.

Symbolic hand gestures in Buddhism. Most mudras are contained in the hands and fingers, but some mudras might emanate from the whole body.

Prayer wheels are cylindrical wheels on a spindle that are turned while reciting mantras to purify bad karma and amass good karma.

The goal of pilgrimage is to foster a connection to a sacred site.

Paying respect to Buddha and other deities.

Confession of faults and wrongdoing.

Neo-Buddhism is the term used to describe modern Buddhist movements. The difference between Theravada, Mahayana, and Vajrayana Buddhism and the new Buddhist movements such as Zen Buddhism, Navayana, The Vipsanna Movement and Diamond Way are many.

Many changes came about in the early 1900s, a co-creation of Western Orientalists and reform-minded Asian Buddhists.

When influenced by the West, the Four Noble truths were restructured in modern terms and other concepts such as rebirth, karma, and nirvana were ignored. The new, secular Buddhism stresses compassion, impermanence, and selflessness. Meditation and other spiritual exercises focused more on self-development and remain part of Western neo-Buddhist movements.

In the 1950s a neo-Buddhist movement was founded by B.R. Ambedkar. He rejected the Theravada and Mahayana teachings and created Navayana Buddhism. In this new, modern version, Ambedkar utilized science, activism, and social reforms.

He also rejected the influences of karma, rebirth, samsara, meditation, nirvana and the Four Noble Truths, the roots of traditional Buddhism. In their place, he reinterpreted Buddhism by class struggle and social equality. He also created a holy book, “The Buddha and His Dhamma”.

Located in Magelang, Indonesia is the largest Buddhist temple in the world. This amazing temple is one of the 7 Wonders of the World and a UNESCO World Heritage site with more than five million visitors a year.

Lumbini, Nepal was the birthplace of Buddha. This beautiful, ancient temple is also considered a UNESCO World Heritage Site and is visited by over one and a half million people a year.

Located in Bodh Gaya, India, this site is considered the place Buddha became enlightened while sitting under the bodhi tree and as such, is one of the holiest sites in the world. This site is also a UNESCO World Heritage Site.

Sarnath, Uttar Pradesh, India. This is the site where Buddha delivered his first sermon. Sarnath is located ten kilometers north-east of Varanasi. This is one of the most famous Buddhist pilgrimage sites in the world.

Kushinagar, India is the place where Buddha died. There are two sites of importance in this area, the second site is where Buddha was cremated. Because of its proximity to Nepal, it’s one of the most popular Indian Buddhist sites.

All over Asia, there are famous Buddhist statues where millions of people pilgrimage every year. The splendor of these statues is often awe-inspiring. Here is a small list of the most visited for worship and/or tourism.

A Brief History of Buddhism

The history of Buddhism begins in the sixth-century B.C.E and the belief system continues to the present day. After Buddha became enlightened at the age of thirty-five and realized that human suffering can be abolished, he set out to teach what he had learned on his path.

For forty-five years he wandered throughout India teaching the philosophy of Buddhism, which has no God as in Abrahamic religions. The concepts of love, kindness, compassion, and wisdom through meditation were the foundations of Buddhism.