Home
Fun Stuff
How to Celebrate Christmas in Japan 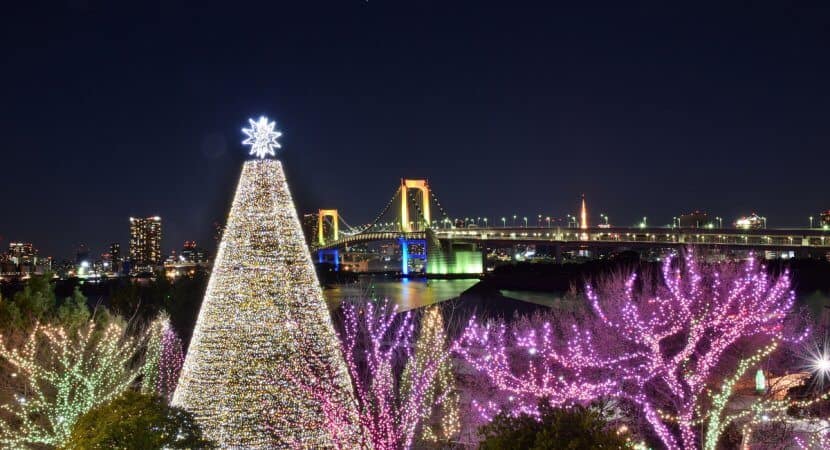 Although less than 1% of the Japanese population is Christian, Christmas is celebrated with as much enthusiasm there as it is in nearly any other country where the holiday is recognized. Then again, many people in the West celebrate it as more of a cultural tradition than a religious one themselves, so really, who’s to say that you need to be Christian to enjoy Christmas?

If you visit a major city in Japan throughout December, you could trick yourself into thinking you’re not in Japan at all. Light-strewn trees illuminate the streets, Christmas decorations dot store windows, and Christmas music can be heard from a public speaker somewhere down the street…the sound of bank accounts depleting from all of the holiday shopping echoes in the distance. Ah, such a familiar sound.

But what makes Christmas different in Japan? How is the holiday spent? Without making any blanket statements, it’s hard to say how every person in the country likes to enjoy Christmas.

But there are some interesting traditions that have developed over that past century or so in Japan that have made spending the holiday there a completely unique experience. As with any concept that’s been brought in from the West, Japan seems to have elevated Christmas and made it its own, in the way only Japan could.

If you ever find yourself in Japan during the Christmas season, below are some of the best ways to join in on the celebrations!

You read that right. If you want to be lazy and bring some of this fast food to a Christmas dinner in Japan, you will be lauded (note: don’t try this in the US, where looks of disgust and judgment are sure to follow).

Since the early 1970’s, when the manager of Japan’s first KFC thought to market “party barrels” to celebrate Christmas, it’s been a tradition to order buckets of fried chicken for the holiday every year.

The story goes that the manager, Takeshi Okawara, overheard a foreign couple talking about how much they missed having turkey for Christmas. At the time, it helped that there really was no major tradition unique to Japan when it came to celebrating Christmas. In the hopes of filling those shoes, Okawara put forth his idea of replacing turkey with fried chicken (they’re the same, right?), and the rest is history.

It also doesn’t hurt that Colonel Sanders is a white dude with grey facial hair and a red apron, making him the underpaid, non-union stand-in for Santa Claus.

But don’t expect to be able to just pick a bucket up as soon as the Christmas bells ring- you’ll need to order your chicken ahead of time, unless you enjoy waiting for potentially hours in line for that golden, crispy chicken. You can now even order meal packages that come with wine and dessert (yes, please!).

After WWII, when Japan was rebounding from the devastation and its economy was on an upswing, goods like sugar, milk, and butter became much more available.Missionaries from America in Japan described what Christmas was like back home for families, and introduced ideas like gift-exchanging and enjoying desserts after dinner on Christmas. Enter: the Christmas cake.

Christmas sponge cake, with creamy white frosting and cardinal-red strawberries dotting the surface, became a symbol of prosperity and success after the war. What once would have been a luxury only enjoyed by the elite became a normal Christmas dessert that could be enjoyed by everyone.

Equality for all! Now everyone can get cavities!

Also, if you take a good look at it, does the color scheme (a white canvas with a red dot at the center) remind you of anything? Maybe freshen up on your country flags if it’s not immediately clear. You can also refer to the emojis on your phone and scroll through until you find the sweet, delicious-looking cake in the food section.

Fun fact: The Christmas cakes go on sale at a discounted price on December 25th. This was the source of the endearing slang term “Christmas cake”, which lovingly referred to unmarried women over the age of 25 who have now become stale and unworthy of any affection. Aww!

Speaking of affection (or lack thereof), Christmas Eve is comparable to Valentine’s Day in Japan. Couples typically see it as an opportunity to spend time together by going to a special restaurant, or to stroll around their lit-up city, warm Christmas lights all aglow.

And if you’re single, it’s an opportunity to drink until you’re able to drown in a puddle of your own tears.

I kid! You drink until you’re able to drown in a puddle of spilled Pinot Grigio.

Fear not, singletons. Christmas Eve is also seen as a time to relax at home with family and friends, enjoying food (likely the aforementioned KFC), drinks (that have alcohol, preferably), and the pleasure of each other’s company. Christmas Day itself isn’t typically seen as the day to celebrate the holiday. Plenty of people still go to work on the 25th (somebody’s gotta’ go slash the prices on those cakes), so Christmas Eve is the time to have fun and make merry!

Someone get me a glass of Pinot Grigio, please.

As mentioned above, couples enjoy going to public spaces on Christmas Eve to shove their love and affection in the face of others. (Kidding! PDA isn’t really a thing in Japan. No, really, look it up.)

One way this is done is to take in the sights of local Christmas light displays or shows that are around during the holiday season.

And I don’t want to paint a picture here that understates how epic these displays can get. Don’t envision a few puny lights strung up around some trees.

These are works of art. The displays are typically set up in parks and city centers, and are meant to dazzle.

The illuminations can be huge displays that are a part of music-synchronized shows, while other times millions of lights (yes, millions) are arranged in the shape of large animals or into actual light tunnels you can walk through.

Taking a walk around these illuminations is so stunning, if you don’t have a significant other at the start of it, don’t worry, you’ll have fallen in love with some stranger and gotten engaged by the end of it. You’ll walk out hand-in-hand, glowing from all of the LED lights and poor decision-making.

Continuing on with the theme that Christmas in Japan is all about the people with sizzling romances in their lives, the exchange of gifts for the holiday is primarily between significant others, not family and friends.

That’s not to say that some parents don’t get gifts for their kids, but it’s definitely not jump-into-the-huge-pile-of-presents-underneath-the-Christmas-tree-extravagant like it can be in the West.

Oseibo, the traditional gift-giving season in Japan that happens to fall during December, calls for end-of-the-year gifts to be given to others whom you’re indebted to: teachers, bosses, landlords, and the like.

Over the years, however, younger generations have taken up the more casual idea of giving Christmas gifts to friends and others in place of oseibo, as it’s more of an enjoyable private expression than an obligatory one. But since the oseibo season and the Christmas season are around the same time, the gifts have morphed into a sort of…oseibo-Christmas-Transformer gift?

Of course, if the Christmas spirit moves you whilst in Japan, don’t be shy about giving gifts to anyone that you care about and would like to show appreciation for. Just be prepared to get a return thank you gift and be stuck in the never-ending gift-exchange cycle that can only be broken by faking your own death or leaving the country.

European-style Christmas markets have become more popular in Japan in recent years, and thank God, because where else am I supposed to get a mug of hot wine while I walk around outdoors, shopping for Christmas presents?

Christmas markets also just give me a happy, fuzzy feeling inside, what with the warm glow that seems to light up all of the stalls and the cheerful faces that fill the lanes. The wine doesn’t hurt, either.

At the markets, you can find much that you would find if you were in Germany: wooden figurines, handmade Christmas decorations, bratwurst, mulled wine, and German sweets.

Check out some of the food at this Christmas market in Fukuoka:

The jolliest man of all! Take that, Colonel Sanders.

If all of that doesn’t get you into the holiday spirit, I’m not sure what would. Maybe more hot wine?

Have you ever spent Christmas in Japan? What did you think of it? Let us know in the comments below!