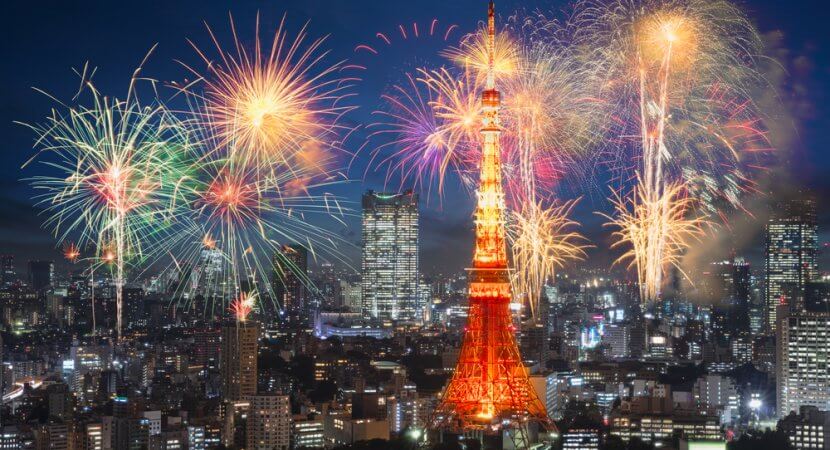 Midnight strikes! Cue the kiss, or awkward “Do we hug, or high five? Or…” with your buddies that you may not be on intimate terms with.

And whether you’re breaking out of your shell over the New Year, called oshougatsu (お正月) in Japan, or somewhere (gloriously) far away from the current state of affairs here, you want to be prepared.

Let’s say you’re staying in Japan (just, you know, a random pick) – how does one go about celebrating the New Year there? Do you need to bring that “fancy” sequin dress you bought at H&M? Or the obnoxious glasses that numerically spell out the year that’s to come? These are important questions.

Well, in Japan, things are done a little differently. There is no “New Year’s Rockin’ Eve with Ryan Seacrest” (what!). I know. Who are these monsters? What other tradition does a nation need? Temples? Good luck charms? Please. Seeing Ryan Seacrest’s blonde highlights glow from the neon lights of Times Square is good luck.

But, okay, I admit it: I love a good, botched lip-synched performance by Mariah Carrey as the next red-blooded American, but there’s something truly lovely and calmer about New Year’s in Japan. It’s not about partying and drinking yourself into oblivion (although, honestly, have I made it clear that 2017 has been sort of horrible? It would be understandable if you did).

Below are some things you can partake in if fortune is shining upon you and you are in Japan during the New Year.

1. Say it With Gusto

If you’re going to be in Japan over the New Year, it wouldn’t be a bad idea to know how to properly greet people. If you know absolutely no Japanese, don’t panic! There are standard phrases you can use, but also shortened versions that are much more manageable.

If you’re there in the days leading up to New Year’s and you’re bidding farewell to someone you’ll not see until the next year (or ever again- I mean, let’s be honest, we can’t be friends with everyone), you can say:

This means “I hope you will have a good New Year”.
OR, a much simpler, and, in my opinion, commonly-heard, version of that is:

And it’s slightly catchy, no? All those “oi’s” and “o’s” just sort of roll off the tongue. And then I just sound like I’m saying “yoyoyo”, which can get confusing.

If it’s New Year’s Day or beyond to the middle of the month, and you’re seeing someone for the first time, feel free to greet them with a good ole’:

And if that’s just too crazy for you, and you’re speaking with someone within your age range or below, feel free to simplify it with:

Now, are you feeling really crazy? Like, crazy-cool? If you want to feel super in with the kids, a casual “Ake-ome!” will do (あけおめ!). You are now hip. You’re welcome.

2. For Whom the Bell Tolls

On New Year’s Eve day in Times Square, New York City, people voluntarily shove themselves into packed, fenced-off areas, waiting from morning until midnight, with no place to use the bathroom (this is true).

They go through all this trouble just to watch a big ball ascend and light up, have 60 seconds of fun, battle their way out of said areas, and finally shove their way onto a crowded train. Oh, to be alive!

Elsewhere, people are not doing this.

For example, in Japan on New Year’s Eve, it’s common to head to a Buddhist temple to enjoy joya-no-kane, 除夜の鐘、or, the New Year’s Eve Bell.
Around 11pm or so, temples all around Japan begin ringing their bells 108 times, with the amount coinciding with the 108 earthly temptations stated in Buddhist teachings.

The bells are rung in the hopes that we might rid ourselves of these desires and allow for a fresh start at the New Year- a clean slate, if you will. The bell tolls 107 times right up through the final moments of the evening, with the 108th ringing in the New Year (Ake-ome!).

Of course, expect crowds, but there at least is no need to wait the whole day at the temple with no bathroom breaks (cough) to get a shot at ringing the bell yourself. Just try to arrive a little early, and chances are, if you’re at a smaller temple, you’ll get to send up a little private prayer and toll the bell after the monks are finished. Be gone, earthly temptations!

Temptations immune to bell-tolling include but are not limited to: being inexplicably attracted to Jeff Goldblum, eating an entire pizza alone, and the desire to smack anyone who reads and walks at the same time in public, especially at rush hour.

One year-end dish is toshikoshi soba (年越しそば). These noodles are eaten at year’s end and the word toshikoshi translates to jumping or transitioning (or running and screaming) from one year to the next. Soba noodles are long and thin, symbolizing longevity and health (or, some say, a long, peaceful and uneventful life).

The traditional food eaten during the first three days of the New Year is known as osechi ryouri (おせち料理). And, unlike at some holiday feasts (ahem, Thanksgiving), eating excessive amounts of the food doesn’t put your stomach at a high risk of bulging over your jeans.

The dishes are made up of colorful, carefully chosen vegetables, seafood, and mochi (rice cake). These are all elegantly displayed in multi-tiered bento boxes, called jūbako(重箱) which families share, sometimes huddled cozily under the kotatsu.

Osechi is usually prepared in the days leading up to New Year’s so the family (let’s be honest, I’m talking about my ladies, the master chefs of most Japanese households) can all sit and relax instead of worrying about cooking over the holiday.

A lot of the foods have their own special, symbolic meanings that relate to the New Year. For instance, konbu, a type of seaweed, sounds very much like the verb yorokobu(喜ぶ)which means “to be happy”. Thus, konbu (昆布) is served in the hope of a joyous year ahead.

Dried persimmon, hoshigaki(干し柿) resembles the weathered, wrinkled skin of an older person, and so represents the wish for a long life (because nothing makes you look forward to old age like a glimpse down the road into your skin’s sad, dehydrated future).

Along with the osechi ryori, you’ll also find ozoni (お雑煮), a soup with a miso or soy sauce base, usually served with mochi, meat, and vegetables (the components differ depending on the prefecture and local produce).

I, for one, will make sure to eat plenty of soba and konbu.

4. Hatsumode- The First Visit to Temples and Shrines

Oh, you thought we were done with shrines and temples? Silly goose!

Once the New Year bell has echoed throughout the land, you are officially clear to head to your nearest shrine or temple for hatsumoude(初詣)。Hatsumode means “first prayer of the year”.

You can make this visit as soon as midnight strikes, or anytime during the first three days of the New Year. If you go at midnight, it’s sort of akin to going to the Christmas midnight mass (if you grew up Catholic in the Midwest and your mom made you go so she could “hear your beautiful singing voice,” when all you wanted to do was sleep…love you, Mom!).

You’re free to go to either a Buddhist temple or a Shinto shrine (some have specific, desired fortunes they are known for, such as successful business ventures, a healthy pregnancy, etc).

You can get yourself a small omamori (お守り), a traditional Japanese talisman or amulet that represents certain wishes (love, wealth, health, etc), as well.

Feel free to bring your old omamori from last year so you can WATCH IT BURN TO ASHES- I mean, er, so you can calmly watch it fade away in the sacred fire, just as the past year has vanished, with peace and love in your heart. Now go get a new one and do it all over again!

If you got a “good fortune”omijuki, then great! Keep it, frame it, show it off, do what you will. But if it’s a negative omikuji, throw it immediately on the ground, scream, and run away.

That’s just what I would do. What tradition calls for is for you to (act like a sane person and) tie the paper to a pole or a tree and leave the curse at the temple.

You’ve eaten some osechi, you’ve made your visit to the shrine or temple of choice, and now you are ready for some hard-core shopping.

These sealed bags contain mysterious goodies that are leftover from the year and need to be sold, often at a discount of up to 50% or more. Could you imagine if Sephora did this in the States? I’m just saying, there would be riots. Claws would be out.

In recent years, fukubukuro have spread beyond just retail and moved onto cafes and restaurants (who often fill bags with their specialties in a frozen or vacuum-sealed pouch). In recent years, there have even been “experience” bags being sold.

At a much heftier price tag, buyers can purchase a bag that allow customers to go to concerts, enjoy meals at high-end restaurants, or (my personal favorite), have a “solo wedding experience” in which a single woman (I like how it’s just for women, by the way) can try on wedding kimono and have her picture taken.

Sigh. I’ll just let that one sit there.

There is a risk in the purchase, though. While the lucky bags more often than not contain things that are worth much more than the selling price, if you’re picky about your goods, you might be disappointed in what you get.

The reward, when won, can be high.

I recommend joining in the fun (this is “fun,” right?) by going to a store you like, but not paying anything too extravagant for a bag. That way, if you really score an amazing bag, you’ve gotten very lucky, but if you don’t, then you won’t be too disappointed and won’t want to weep yourself into a black hole for spending all of your cash.

Have you ever spent New Year’s Eve or New Year’s Day in Japan? What did you think of it? Let us know in the comments below.

And Happy Year of the Dog! Woof.