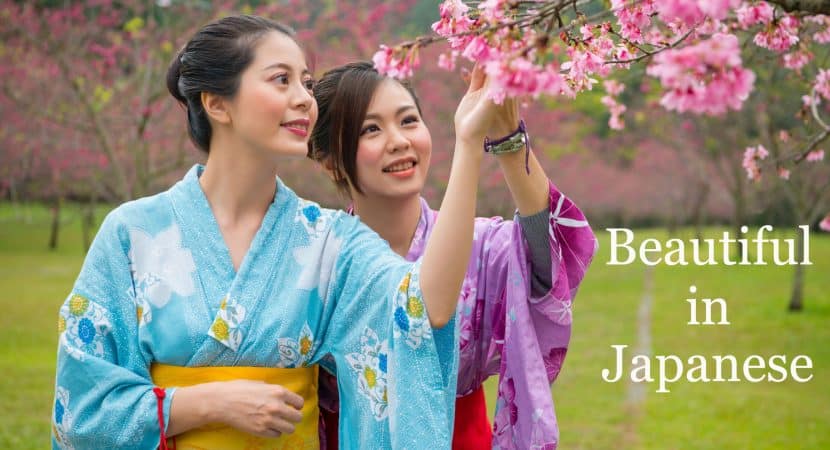 Say you’re watching the sun setting behind Mt. Fuji. How do you tell your Japanese friend that the scene is beautiful? Or perhaps your partner just walked in wearing a new dress. How would you compliment them? Let’s look at how to say beautiful in Japanese.

The two most common words for beautiful in Japanese are 美しい (utsukushii) and 綺麗 (kirei). Both words mean beautiful in English, but there are subtle differences in how and when to use them.

Because the kanji 綺麗 is difficult even for Japanese natives, this word is often written either in hiragana (きれい) or even katakana (キレイ). きれい has a broader range of use than 美しい does. Not only can you look at a beautiful sunset and say, “きれい!”, but you can say “きれい” about a room that has been well-cleaned as well.

きれい is used more in spoken situations than 美しい is. It is also a na-adjective, meaning that きれい must always be followed by “な” if used directly before a noun.

If you want to say that something is not beautiful, you must use “じゃない” or “ではない” immediately after きれい.

美しい is used more often in written Japanese than its counterpart きれい. Of the two, 美しい might be more suited to complimenting a person. However, in my experience, 美しい considered a bit more extravagant of a compliment than きれい.

Unlike きれい, the word 美しい has only one set definition: beautiful, gorgeous, etc.

2.  彼女の目は美しかったです 。
(Kanojo no me wa utsukushikatta desu.)
She had beautiful eyes.

While きれい is a na-adjective, 美しい is an i-adjective. This means that 美しい does not require “な” when used directly before a noun. It also has a different conjugation for the negative tense. To say something is not beautiful using 美しい, you must replace the ending “~い” with “~くない.”

How Do I Tell My Girlfriend That She’s Beautiful?

When I asked my Japanese friends which of these words is best for compliments, they warned that using words like きれい or 美しい too early in a relationship can cause discomfort.

They recommended かわいい (kawaii) instead.

While かわいい is translated as cute in English, it is used in Japan to mean “pretty.” かわいい comes across more casually than きれい or うつくしい, so it’s probably the best word to use if you’re on a first date.  Although I’m sure any girl would love hearing that they are かわいい at any time.

How Do You Say “You Are Beautiful” in Japanese?

You may have learned that あなた (anata) means “you” in Japanese.

So it is correct to say あなたはきれいです。(Anata wa kirei desu.)

However, there are two things that makes this sentence unnatural.  Most likely, you will be saying this to a girl that you like (or are trying to get to like you) or someone you just want to compliment.  Even though あなた (anata) means “you” in Japanese, it is unnatural to use with someone you don’t know well.  In natural Japanese, you would just say the compliment “きれいです。”

It is much more natural to not say “you” in Japanese.  The reason for this is because when you are speaking to someone, that person already knows you are talking to them.  So saying “you” is redundant.  I know this sounds weird for English speakers.  However, Japanese speakers don’t say pronouns (I, you, him) when it is already understood from the context.  If you really wanted to say “you” with this compliment, 君 (kimi) would be better than あなた (anata).  But the best way would to be to use the person’s name.

Also, using です (desu) sounds very stiff and almost too formal.  It feels as if you are a robot giving a statement.  It’s more natural (and meaningful) if you just drop the です (desu).  Or to make it sound a little more friendly, you can say ね (ne) at the end, with or without the です (desu).

If you plan on visiting Japan, beautiful is a useful word to know. Remember that there are different grammatical rules for きれい and 美しい. There are also some situations in which one might be better than the other. What are some things in Japan that you think are beautiful? If you have any photos, feel free to share them with other readers in the comments below! Thank you for reading!