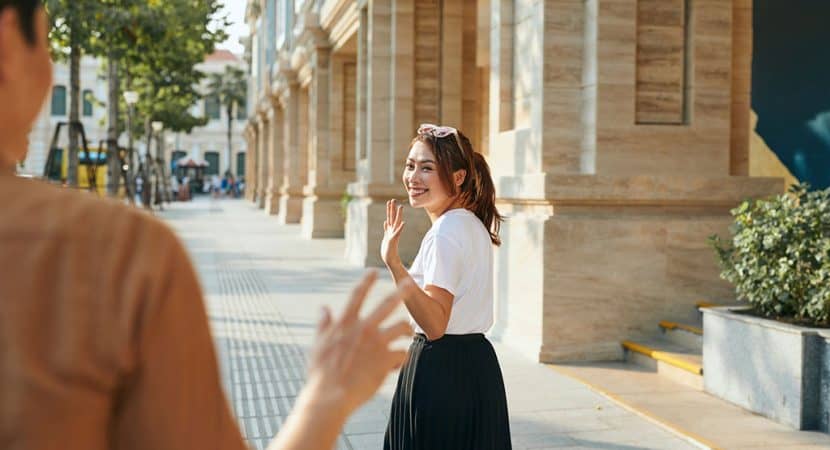 Many of you already know that the word “sayonara” means goodbye in Japanese, but did you know that it’s unnatural to say in most situations? It’s too formal and “serious” to use casually.

So what’s the best way to say goodbye in Japanese? Let’s look at the most common (formal and informal) ways and how to use them naturally.

These 4 ways of saying bye in Japanese are more suited for formal or business situations.

As mentioned above, sayonara is probably the most well-known way to say bye in Japanese. However, the nuance of sayonara implies that you won’t see someone for a long time, possibly forever. A more accurate translation of sayonara would be “farewell.”

It’s the same in English. If you told your friend “farewell” when you’re finished talking to him on the phone, that would sound weird.  Sayonara does have a very heavy and serious nuance if you use it with your friends, family, or significant other. With people you are close to, you would speak casually. Saying sayonara makes things sound formal, which is why it sounds like you are saying “farewell” instead of a friendly “goodbye.”

However, if you are in a more formal situation (talking to teachers at school, customers, etc.), you can use sayonara even if you’ll see the person again soon. Students and teachers at schools in Japan tell each other sayonara every day when they leave. This doesn’t mean “goodbye forever.” In this case, saying sayonara is natural because it is more formal and thus more polite.

You may notice that sayonara is written in two different ways さよなら (sayonara) and さようなら(sayōnara). What gives?

In Japanese, both words are used. However, さようなら(sayōnara) is technically the correct spelling. さよなら (sayonara – without the “う”, that is, “o” instead of “ō”) is a casual form that many people are using recently. Also, “sayonara” is how you would spell it out in English (it’s even in some English dictionaries).

Sayonara actually comes from the word 左様ならば (sayōnaraba), which means “if so” in English. The feeling of this word would translate to something like, “if this is to happen, there is nothing I can do.” So saying sayonara is like saying, “If we must part, let it be.”

Also, if you are a big baseball fan, “Sayonara home run” is a word you might want to learn. This phrase is used to describe a “game-ending home run,” which finishes a game.

Shitsurei shimasu is a formal way to say goodbye, and it is very commonly used in the workplace. If you work in Japan, you’ll hear this phrase at interviews, meetings, and even when people are entering or exiting someone’s room. Since it is formal, you wouldn’t use it with your friends or family.

Shitsurei means “rude” or “impolite,” while shimasu is the verb meaning “to do.” So shitsurei shimasu literally means “I’m going to be rude.” How in the world does this translate to “goodbye?”

Let’s say you finished all of your work for the day and you are about to go home. However, you notice that your co-workers are still busy doing their work. By saying “shitsurei shimasu,” in this case, the nuance is “I’m sorry for being rude by leaving before you.” Which translates as a formal and respectful way to say “goodbye.”

There is actually a set phrase you use specifically for when you leave work.  You add the word “お先に” (osaki ni), which means “before” in front of 失礼します.

お先に失礼します。
(osaki ni shitsurei shimasu)
Excuse me for leaving before you.

You even use shitsurei shimasu when you enter someone’s office or room. This takes on the meaning of, “Sorry for intruding…”

Note: You also use shitsurei shimasu to say goodbye politely to someone on the phone. You would use this to someone with a higher social status than you (your boss, teacher, etc.) or even with strangers to be polite.

Ojama shimashita is a phrase you’ll use every time you visit someone’s home. It is a more casual version of shitsurei shimasu. Ojama means “hindrance” or “intrusion.” Shimashita is the past tense form of “shimasu,” which means “to do.”

When you leave someone’s house and say, “お邪魔しました” you are telling them, “I’m sorry for the intrusion.”

Just like with shitsurei shimasu, you can use します (plain/dictionary form) before entering someone’s room.

After 3 hours of chatting and drinking….

あなた：そろそろ行かなきゃ。お邪魔しました。
Anata: (Sorosoro ikanakya. Ojama shimashita.)
You: I have to go now. (in this situation, it could mean” Thank you for your time.”)

Otsukaresama desu is used mainly in the workplace or with co-workers.

疲れ (tsukare) means “tiredness” in English, and 様 (sama) is a respectful way to refer to someone. Putting these two words together does mean “honorable tiredness.” While there isn’t a precise English translation for this phrase, “Thank you for your hard work” is pretty close. Saying this to someone shows your appreciation for someone’s hard work.

This phrase is used a lot by people of all ages. It is even used between friends and family and in text messages. Sometimes parents tell their kids, “Otsukare, ganbatta ne” (Good job, you worked hard). It is a very useful word that you can use whenever someone finishes working (their job, project, class, etc.).

How does this mean goodbye? Remember the phrase お先に失礼します(osaki ni shitsurei shimasu) we just learned above? When people say that phrase when they leave work, the typical response would be “otsukaresama desu” or “otsukaresama deshita” (Thank you for all of your hard work).

When I worked in Japan, I used this word every day to managers, clients, co-workers, and friends. When speaking to people you are close with (friends and family), you can drop the “sama desu” and just say the casual, “otsukare.” I miss saying this phrase ever since living abroad since there are no equivalent phrases in English.

ご苦労様です (Gokurōsama desu) is another phrase that means the same thing as otsukaresama desu. However, gokurōsama is always said to people with a lower social status than you. So be careful with the usage. If your boss or managers tell you “gokurōsama,” you must be respectful and say “otsukaresama desu” back to them instead.

You are leaving the workplace and want to say goodbye to your manager.

お疲れ様でした。お先に失礼します。
(Otsukaresama deshita. Osakini shitsurei shimasu.)
Thank you for your hard work. I will be leaving now.

Informal Ways to Say Goodbye/See you in Japanese

Here are more casual ways you would say goodbye to your friends, family, or people you are close with.

These words mean “see you” in Japanese. It is used to say goodbye to people you are close with, like your friends and family. It is commonly used in everyday Japanese conversations.

You can also use また when you plan on seeing someone again after a specific amount of time.

Bai bai comes from ” bye” in English. It is used just as often as jā ne or mata ne. However, it does sound a little “cute,” so it is said mainly by girls. Men can use it to say goodbye to girls, but it’s a little too girly for men to say it to other men.

Japanese has many different ways to say goodbye. You must use the correct word appropriate to the situation. Just remember to use a formal greeting if you are at work or speaking with people you want to show respect to (your boss or co-workers, customers, even strangers). The casual ways to say bye are mainly used for your family and friends.

I hope you learned something new today!

Yuka Fujiwara went to live abroad in Toronto, Canada in 2011 on a working holiday visa. She had a great time spending one year going to a school and working. She later returned to Japan and worked as a bilingual professional secretary at a global company in Marunouchi, Tokyo.  She didn't get enough of  Canada the first time, so she moved back.  Loves writing and reading, and has a passion about conveying accurate, useful and interesting Japanese culture to others.