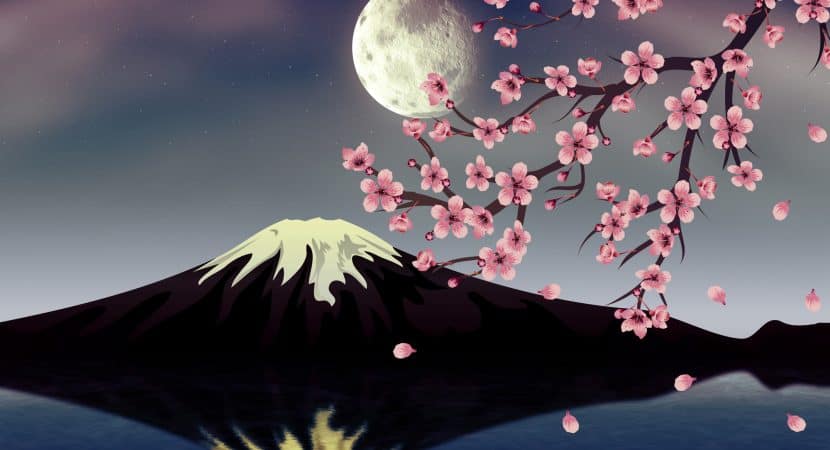 The moon is full of symbolism, relevant to any culture in the world, and Japanese culture is no exception. In this article, you will discover how to say moon in Japanese, related words, and much more. Let’s dive into it!

How to Say Moon in Japanese: 月 (Tsuki)

月 (tsuki) means “moon” in Japanese. It can be written in hiragana as “つき.”

The kanji (月), however, can have different readings and meanings depending on the context. For example, 月 can also mean “month.”

Let’s look at a few examples of the usage of 月:

As we mentioned, 月 can mean either “moon” or “month.” Almost all kanji have more than one reading. 月 is no exception. The kanji readings of Chinese origin are named on-yomi, while the Japanese readings are called kun-yomi.

In most cases, when 月 is read as tsuki, it refers to the moon. On the other hand, when it is read as gatsu or getsu, it usually refers to month. However, there are numerous exceptions, and we will go through some of them in the next section.

Like many other kanji, the kun-yomi reading typically applies when the kanji is read on its own (not together with other characters).

1. 鈴木さんとのデートで電灯を消し、月の光を一緒に楽しんだ。
(Suzuki-san to no dēto de dentō o keshi, tsuki no hikari o issho ni tanoshinda.)
During the date with Suzuki, we turned off the lights and enjoyed the moonlight.

Note:  When kanji is paired with other characters to form a word, it usually is read using its on-yomi readings:

2. 書道の展覧会は博物館で月曜日にやっています。
(Shodō no tenrankai wa hakubutsukan de getsuyōbi ni yatteimasu.)
There will be a calligraphy exhibition in the museum on Monday.

Words Related to the Moon in Japanese

Now let’s look at a few other words related to the moon in Japanese, even those that don’t use the kanji character 月.

Finally, here we have a couple of interesting words that use special readings for 月:

月 is used to talk about the months of the year. To get the words for any month in Japanese, you only have to write a number from 1 to 12 and then add 月.

Other Common Words Are:

Another special mention is 月曜日 (getsuyōbi), the word for “Monday.”

This one is very interesting. As you can see, Monday uses the kanji for the moon (月) in its name. In English, the word Monday is also closely related to the moon, as it is in other languages, such as Spanish.

The famous Japanese writer Natsume Soseki (1867～1916) was a high school teacher in his early days. There’s a story where he taught his students that the most appropriate translation for “I love you” in Japanese would be “月が綺麗ですね,” which translates to “The moon is beautiful.” A fantastic literal allusion, given the appropriate context.

Like all the kanji, the actual character is a simplification of what was a pictograph many years ago to represent a concept. This image illustrates the evolution of the character:

Of course, there were many steps, but you get an idea of how the character came to be.

Miguel is a professional translator who became fascinated by Japan's people and culture after visiting a few times as a tourist. He decided to take a leap of faith and move to Japan to start a new life in Tokyo. Having a background as a professional eSports player, he worked translating video games in his first few years and eventually started translating in other fields. Miguel has a passion for the Japanese language and enjoys learning more every day. He is in love with Hamazushi and traveling within Japan, especially the Kansai area.