Home
Useful Japanese Lessons
How To Use Desu , Da, & Deshō in Japanese 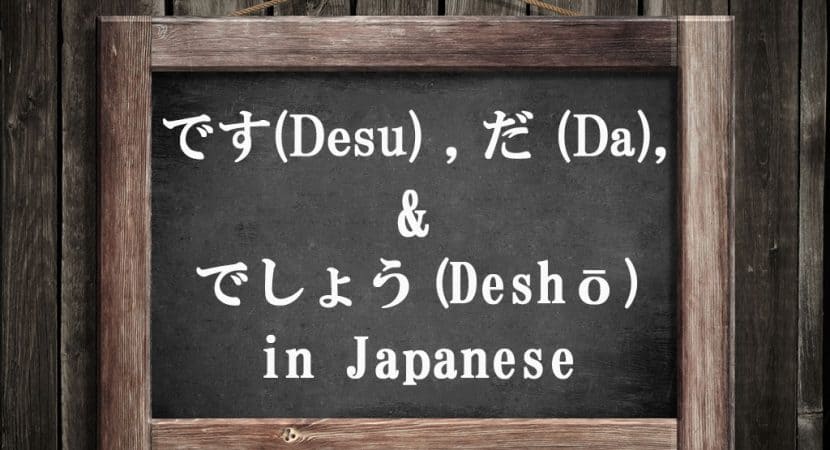 So you’ve started learning Japanese! As you’ve gone along, I bet you’ve stumbled across the word desu. It shows up so often, but what does it mean? And, most importantly, how can you use it in your sentences?

です (desu) is a copula. I know, that sounds like unhelpful grammar jargon, right? Don’t worry—this isn’t all that complicated. A copula is a connecting word. When you have a sentence where you’re naming or describing something, the copula is the bit that links the subject of the sentence (the thing you’re naming or describing) to the subject complement (the name or description). In English, we use the word “is” for our copula.[1]

Let’s look at some examples. In English, a copular sentence will have three things: a subject, a conjugation of “is,” and a word or phrase that names or describes the subject. For example:

How to Use Desu in a Sentence

In Japanese, the copula is the word です (desu). A sentence using です will have the same parts as the English examples above: a subject, the copula (です), and a word or phrase naming or describing the subject. However, Japanese uses a different word order than English, so you’ll need to rearrange them.

In Japanese, the subject always comes first. For example, if you’re trying to name yourself and say “I am Bob,” you’ll start with “I” or 私 (watashi).

Japanese uses particles to mark what each word is doing, grammatically, in the sentence. So next, you need to use a subject marking particle to show that this is your subject. In this example, we’ll use は (wa), but for some sentences, you might use が (ga) instead.[2]

Finally, you’ll put your copula です at the end. That brings us to the whole sentence:

This is a pretty standard copular sentence. If you want to change it up, you can switch out the subject 私 for your new subject, and the name ボブ for your new name or description. For example:

です (desu) is the polite-form way to say the copula. It’s perfect for talking to someone you want to be polite to—a person you don’t know well, or your teacher, for example.

だ (da) is the same word but conjugated into the plain (casual) form. If you’re talking to someone you don’t need to be especially polite to, like a close friend or family member, you can use this instead of です.

これはペンだと思います。
(Kore wa pen da to omoimasu.)
I think this is a pen.

Another common variation on the copula is でしょう (deshō). This makes the copula less absolute. You can use this when you’re trying to express uncertainty or seek confirmation from your listener.

People also use it just because it sounds softer. It’s common in Japanese to avoid absolute statements; using overly blunt and direct language can come off as a bit aggressive. Using a word like でしょう is one way to tone that down and smooth out communication.

What Is the Ka at the End of the Sentence?

か (ka) is another particle. It goes at the end of a sentence and works like a question mark: it changes the sentence into a question. So, if you see it after a copula, you can read that sentence as a question:

でしょう (deshō) works the same way. This combination is often used for speculation; since でしょう already shows uncertainty, making it into a question intensifies that effect.

One caveat: if you’re using the short form copula だ (da), you don’t combine them like in the above examples. Instead, you drop the copula completely:

Now you know how to make a sentence using です and its variations. Now it’s time to go out and use it! Using this sentence structure, you can introduce yourself, describe objects around you, ask questions, and even make small talk about the weather. It’s a solid starting point for speaking Japanese in your everyday life!

[1] Not all uses of “is” are copulas. Some are verbs of existence. For more info on these and the difference between them and the copula, take a look over here!

[2] It can be tricky to decide whether to use は or が. Check out this article for more information on how to choose which one you want!