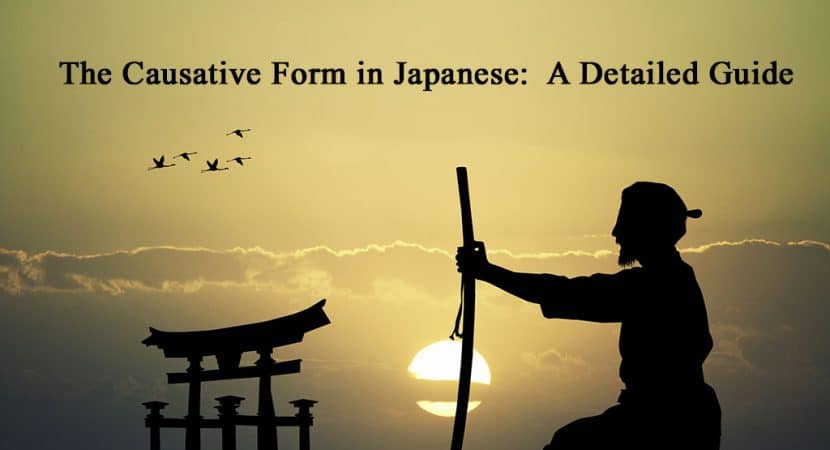 Imagine that you’re a genius high school student who is the vice president of the school council. You have a crush on the council president, but you can’t confess your feelings because that would mean admitting that you liked them first, making you the loser in the relationship! But what do you do if you really like the president?? Well, you make them confess to you first, that’s what. Love is war, after all…

And this, my friends, is where the causative form in Japanese comes in.

What is the Causative Form in Japanese?

The causative form, known as 使役動詞 (shieki dōshi) in Japanese, describes situations wherein someone or something causes some action to happen. There are 2 nuances to the causative form:

In the manga『かぐや様は告らせたい』(Kaguya-sama wa kokurasetai), Kaguya-sama wants to make the council president confess his love to her—hence the 告らせたい of the title, the causative form of the verb 告る* (kokuru = to confess one’s feelings) plus 〜たい (~tai) to indicate desire.

*Note: 告る (kokuru) is a shortened form of 告白する (kokuhaku suru). They both mean the same thing, but 告る became popular in the ’90s and is considered slang by some people.

We also use the causative form when we let something happen—like letting a head of lettuce go bad and turn to brown soup in a plastic bag at the back of the fridge. Causing the lettuce to rot is described as 腐らせる (kusaraseru), the causative form of the verb 腐る (kusaru = to rot).

We use the causative form in many situations, so let’s first check out how to derive it!

How to Change Verbs Into the Causative Form

Changing a Group 1 / Godan or う-Verb into its causative form requires two steps:

Changing a Group 2 / Ichidan or る-Verb into its causative form simply requires dropping the verb suffix 〜る and adding 〜させる (~saseru) to the verb stem.

Here are the causative forms of the Group 3 / Irregular Verbs, similar to their passive forms!

Forming the Short Version of the Causative Form

There’s also a short version of the causative form, but its usage varies by region. Sometimes, these shortened forms can sound old-fashioned, but some words used in some areas like Kansai.

To form the short version of the causative form for Group 1 verbs, we:

To form the short version of the causative form for Group 2 verbs:

And finally, the short version of the causative form for Group 3 verbs are:

Now that we know how to make the causative form, let’s look at how to use it!

How to Use the Causative Form

Remember that the causative form is often described as either:

That’s an important point, but the form is more interesting than that!

You can’t tell from the verb or the particles whether the causing comes with force, permission, love, regret, or another emotion—but the fact that the causative can hold all those meanings is the beauty of it.

Examples: Make Someone Do Something

3. お父さんは子どもたちに部屋の電気を消さすと、お化けのまねをして驚かせた。
(Otōsan wa kodomotachi ni heya no denki o kesasu to, obake no mane o shi te odorokaseta.)
After Dad made their children turn off the light in the room, he pretended to be a ghost and surprised them.)

Examples: Let Someone Do Something

Let’s go into more detail on how to make causative sentences in Japanese.

Transitive and Intransitive Verbs with the Causative Form

In terms of grammar, one distinction for causative forms is whether the verb is transitive or intransitive. To learn more, let’s look at an example, taken from the novel 『人間失格』(Ningen shikkaku = No Longer Human, 1948) by 太宰治 (DAZAI Osamu, 1909–1948), a Japanese 文豪 (bungō = literary giant). (Link to page is in Japanese only)

Elements of a Causative Sentence in Japanese

But first, I want to reiterate that the causative form describes when someone or something causes some action to happen. In such situations, there can be several elements:

Here’s a sentence from the novel mentioned above, where the main character is talking about making his family laugh, begins like this:

In the example, the main character (自分) is making a servant hit the piano keys (「ピアノのキイを たたかせ」), with the Group 1 verb たたく (tataku = to hit, to strike) in the causative form (たたかせる).

In the example above, the causative verb (たたかせる) is transitive because it takes on a direct object of the piano keys, marked by the particle を (「ピアノのキイを」).

The use of the direct object particle is important because if the verb in the causative form is transitive and uses the particle を, then the person carrying out the action (the “receiver”) has to be marked with a に. In our example,「下男のひとりに」).

This sentence is an example of a typical “make someone do something” use of the causative and the tendency not to repeat the same particle in a Japanese sentence.

Causative form with transitive verbs = The “receiver” (person or thing being made/allowed to do an action) is marked by a に.

2. お父さんは私に宿題をさせました。
(Otōsan wa watashi ni shukudai o sasemashita.)
My father made me do my homework.

How To Tell If You’re Making or Letting Someone Do Something?

Let’s look at the examples above.

In the first example, (マイクはジョンに水を飲ませた。), we don’t know whether Mike made John drink water or if he let him drink water. We don’t have enough information from the context.

Besides judging from the context of the sentence, there is another easy way to tell if someone is being made or allowed to do something.  That would include the use of giving and receiving verbs together with a causative verb. We’ll go over this in detail below.

Now let’s look at another causative example, this time with an intransitive verb:

Here the main character is describing how she made everyone laugh a lot (大笑いする (ōwarai suru) = lit. to do a big laugh). This verb (the Group 3 verb する) is intransitive because it doesn’t take a direct object.

Because Kimi isn’t physically or forcefully making someone laugh, like pushing a button on a doll. Kimi was the cause of the laugher…but the laughter itself was the result of each person deciding if her dance was funny or not. It’s also not the idea of letting someone laugh or giving them permission to do so. Like walking, sleeping, or breathing, laughing is an intransitive verb since no direct object is involved.

However, since Kimi is the cause of everyone laughing, the people are marked by the particle を. This is to state that Kimi affected the people by causing them to laugh. The causative form can indicate situations where someone causes a change in an emotional state, such as making someone laugh, happy, mad, or sad.

Unlike in a causative sentence containing a transitive verb, the particle here can be either を or に—the sentence would still be fine written this way: きみはマイケル・ジャクソンの踊りを真似して、皆に⼤笑いさせました。

As mentioned above, you could either use the particle お or に to mark the people who were affected by the “causer.” You can use either and native Japanese speakers will completey understand what youare saying.

However, there is a difference in the nuance between the two particles.

It gets a little more complicated than this, and truth be told, you probably don’t need to think about it this much. However, for all your grammar fans out there, let’s go into more detail:

1. You should use the particle お to make the receiver when using verbs that express feelings like:

One instance in which the causative is clearly for letting someone do something is when it is in the 〜て (~te) form and attached to a giving or receiving verb, including:

Since a verb in its causative form is a Group 2 verb, we form its 〜て form by dropping its suffix 〜る and attaching a 〜て in its place, like this:

Since using くれる means that someone did a favor for me/us, we know that this sentence must mean that “mother let me eat snacks” and not “made me eat snacks.”

下さる is the more formal and polite word for くれる, but it means the same thing; someone doing a favor for me/us.

アメリカの大統領は私たちに写真を撮らせて下さいました。
(America no daitōryō wa watashitachi ni shashin o torasete kudasaimashita.)
The president of the United States of America let us take a picture (of him).

Just like くれる, we received the favor of being able to take the president’s picture (The president let us take his picture).

When using あげる with a causative verb, the subject of the sentence (the “causer”) will be the one to make or let someone (the “receiver”) do something.

宿題が終わるまではテレビを見させてあげないよ。
(Shukudai ga owaru made wa terebi o misasete agenai yo.)
If you don’t finish your homework, I won’t let you watch TV.

Because of this, it is challenging to use 差し上げる with a causative sentence. You can’t make someone do something if you are trying to honor them at the same time. If someone has a higher social status than you, they will be the ones to make or let you do something, not the other way around.

**Note: While 差し上げる is a polite way to give something to someone, some people think that is isn’t the best choice. This is because it can have a feeling of “talking down” to someone. By saying 差し上げる you are implying that you doing something for someone else, which gives you power in a way.

More neutral, yet still very polite ways to say you will do something for someone would be to use the honorific お (o) and いたす (itasu), which is the humble form for する (suru).

For example instead of saying:

This giving verb is the opposite of 差し上げる. やる is a little rough and is used to give something to people or things with equal or less social status than you (including animals, plants, etc.).

Situation: An older brother talking to his younger brother.

いい子にしてたら俺のパソコンを使わせてやるよ。
(Iiko ni shitetara ore no pasokon o tsukawasete yaru yo.)
If you be good, I’ll let you use my computer.

夜遅くなったので友達の家に泊まらせてもらった。
(Yoru osoku natta node tomodachi no ie ni tomarasete moratta.)
It was getting late at night, so my friend let me stay at his place.

頂く is the honorific form (more polite and formal) of もらう. You’ll often hear it in speeches or when someone talks in a business meeting.

Here is another example from Dazai’s『人間失格 』:

「⾃分は・・・学校へ⾏っても授業時間に漫画などを書き、休憩時間にはそれをクラスの者たちに説明して聞かせて、笑わせてやりました。」
(Jibun wa…gakkō e itte mo jugyō jikan ni manga nado o kaki, kyūkei jikan ni wa sore o kurasu no mono tachi ni setsumei shite kikasete, warawasete yarimashita.)
Even when I went to school, I drew manga and such during class, and during recess, I explained it to my classmates and made them laugh.

The person causing the action of laughing (自分 = I, myself) is of equal status with the ones being made to laugh (クラスの者たち = classmates). That’s why the verb やる (yaru) is used (which denotes giving to those equal or lower on the power spectrum, including friends, younger siblings, pets, and plants). やる is attached to the te-form of 笑わせる (warawaseru = to make laugh).

Satoko grew up in both Japan and the United States, enjoying the best of both worlds. She now teaches the Japanese language, literature, and culture in California.