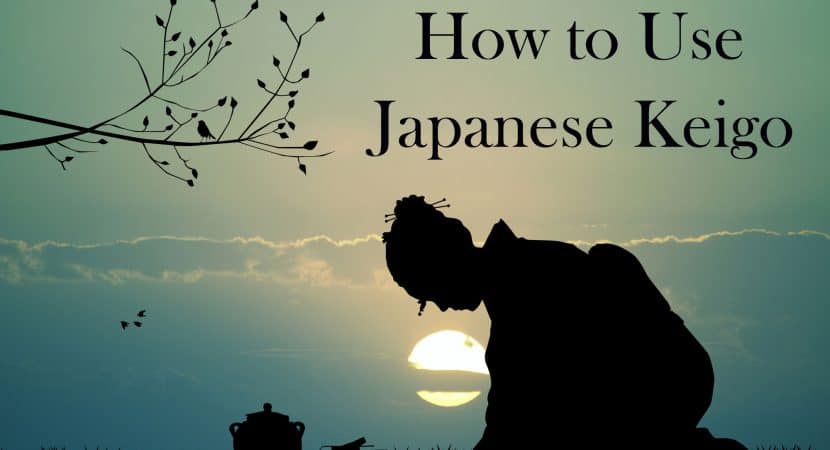 Keigo is considered one of the more challenging aspects of studying Japanese. Its three-tier system of honorific levels is a challenge to native and foreign students alike. In this article, we’ll explore the three major categories of  Japanese keigo, how and when to use them, and why Japan uses this polite language in the first place.

The kanji for 敬語 (keigo), consists of 敬 (kei), which means “respectful or honored,” while 語 (go) means “language.” This tells us that keigo is polite or honorific language in Japanese. It is a relic of Japan’s caste system, which stood firm until the end of the Edo Period.

Back then, keigo was used to speak respectfully to those in a higher social class, like the samurai. These days, it is used more to distinguish people in your “inner” and “outer” circles.

Despite its age, keigo is a vital component of the Japanese language and culture. The culture of keigo can be found everywhere in Japan, from work and school life to social outings. While Japanese people don’t usually expect a perfect understanding of keigo from foreigners who visit and live in Japan, using keigo correctly can strengthen your social bonds with friends and coworkers. It will help you settle more naturally into your life in Japan.

When to Use Keigo: The Ins and Outs

Learning when to use the different forms of keigo can almost be as daunting as the language itself. The simplest way to think about keigo is to consider the Japanese concept of “内と外” (uchi to soto)—literally “inside and outside.”

People who are “inside” (内, uchi) are those you consider your inner circle: your parents and close family, your friends, and on occasion, your peers. You don’t typically need to speak in keigo to these people—in fact, doing so might even hurt their feelings! In the wrong situation, keigo can come across as deliberately cold and distant. Be careful about using it with a friend or someone close to you in age.

Those considered to be “outside” (外, soto) of your circle are elders, superiors in the workplace, customers, and other individuals of status. Keigo‘s role is especially strong in the workplace, where experience and age determine 先輩 (senpai) or 後輩 (kouhai) relationships.

If you speak to your senpai (someone who is older or has been in the job longer than yourself), you will always use keigo. If you are talking to your kouhai, it’s alright to speak casually or with some teineigo (polite form of Japanese).

The senpai/kouhai status extends beyond the workplace sometimes. You might find these titles being used in sports and classroom settings as well.

Depending on the situation and the conversation, different types of keigo will be necessary. Let’s look at the three major levels of keigo.

You might already be familiar with teineigo without realizing it. Teineigo is the basic polite form of Japanese. Simply end your sentences with です (desu )  or the verb form ます (masu). Perhaps you didn’t know that these two endings made your Japanese more polite. In casual and spoken Japanese, desu is often shortened to だ (da), while the verb conjugation of –masu­ isn’t added at all.  Although saying just だ is more for men.  If you attach a よ (yo) to make it だよ (da yo), that form can be used by either men or women.  Verbs can be left in the dictionary form, especially if the conversation is spoken.

1.  明日のパーティーに行きます。
(ashita no pātī ni ikimasu.)
I will attend the party tomorrow.

As you can see, the major difference between the casual and polite versions of these sentences was the desu and masu.

Another difference in Tanaka’s introduction is the pronoun he used. 俺 (ore) is a very casual and masculine pronoun, while 私 (watashi) is gender-neutral. In almost every setting, the pronoun 私 (watashi) is the polite pronoun to use. It is recommended for every level of keigo, regardless of your gender.

Unlike the other two levels of keigo, teineigo can be used with a peer or someone of the same age/social group. It is a “safe” form to use if you’re unsure of how polite you should be when talking to someone.

Another aspect of teineigo is the addition of the prefixes お (o) or ご (go) to certain nouns. This makes your sentence sound more polite and elegant.  However, be aware that some nouns almost ALWAYS are used with the お (o) prefix, regardless of the politeness level.  Some examples of these are:

The word 尊敬 (sonkei) means “to respect.”  You will use sonkeigo when speaking to someone respectable.

More formal than teineigo, sonkeigo is used to honor the person you are speaking to. You would use this form of keigo when speaking to someone who ranks above you in the workplace, to a customer or a guest, or to a stranger who is older or more experienced than yourself.

Conjugating sonkeigo can be tricky, as there are many special honorific words used to replace the verbs and phrases used in teineigo or casual Japanese. A go-to formula would look something like this:

Below are some commonly used sonkeigo words and phrases. Some of them may look nothing like their casual and teineigo counterparts; the best way to learn them is to use and memorize them.

謙譲語 (kenjōgo) means “self-humbling.”  The difference between sonkeigo and kenjōgo is less about levels of formality and more about the subject.

Kenjōgo is even less consistent in its form than sonkeigo. There are so many variations that it’s better to just build on the chart we used with sonkeigo.

You might think that this is a lot of effort and language-learning for the sake of mere politeness. Some of the younger generations of Japanese native speakers tend to agree.

However, in Japan, many language and etiquette experts argue that keigo is something more profound than simple manners or grammatical finesse. To them, keigo is a gift to others and yourself. It gives a social sense of “personal space,” or 距離 (kyori) in Japanese while being professional and respectful.

When keigo is used and the sense of respect if felt by others, they feel the urge to give that same respect back. It’s a sort of “treat others as you would want to be treated” style of thinking. Many Japanese people, especially the older generation, speak with keigo not because it is a social rule but because they consider it the right thing to do.

In that sense, keigo can be quite fulfilling. Consider it this way, and you might find yourself more motivated to tackle the challenge of studying keigo.

Keigo might seem complicated, but with study and practice, you can learn to navigate it effectively and impress your peers or coworkers. For those wanting to live and work long-term in Japan, keigo is a vital part of interacting with the community and culture.

Remember that teineigo is generally polite and has few, if any, limits on when and with whom it can be used. Sonkeigo is used to honor those in positions above your own. Kenjōgois used to humble yourself and your friends/family members.

Another essential thing to remember:  Even native Japanese speakers know how hard keigo can be to learn. Don’t be afraid of making mistakes while you learn; it’s unlikely that you will be reprimanded. The best way to understand keigo is to use it!

Thanks for reading this article! If you have any questions or experiences you want to share about keigo, feel free to leave a comment!