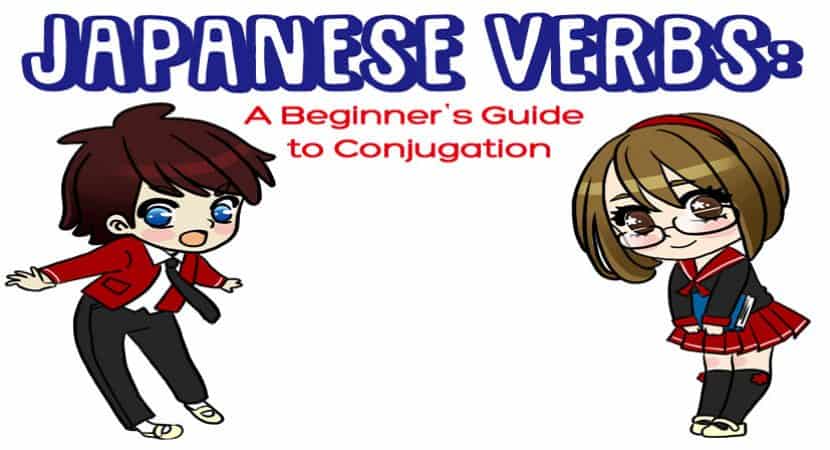 Mastering Japanese verbs is probably one of the most important skills you need to become fluent in Japanese.  Knowing how to conjugate Japanese verbs will allow you to describe actions, desires, situations and a lot more.

My goal is to provide you with the most comprehensive, detailed, and easy to understand guide to help you learn Japanese verbs.

In this guide, we’ll learn how to conjugate verbs based off of the hiragana chart.  If you want to learn more and improve your Japanese (especially speaking), I highly recommend the material on Japanesepod101.

Required knowledge:  Mastery of hiragana.  If you haven’t mastered hiragana yet, check out our absolute beginners guide to learn it.

Getting Started: An Quick Introduction to Japanese Verbs

Before we learn how to conjugate and use Japanese verbs, we need to know 2 things.

1.  Japanese Verbs Are Made up of 2 Parts

So everything that comes before the last character of a verb is its stem.

When we learn to conjugate verbs, we will only be changing the suffix (ending) of the verb.  We will also use the stem form of verbs to conjugate some verbs.

2.  There Are 3 Types of Verbs in Japanese

The way to conjugate verbs is different for each group.

How Do You Tell the Difference Between a Group 1, 2, and 3 Verb?

This can be a little tricky in the beginning.

First, let’s start off by looking at group 1, or u-verbs.

To find out if a verb is a group 1 verb, we look at the suffix (ending) of its dictionary form.

If both group 1 and group 2 verbs can end in る (ru), how do you tell the difference?

I hate to tell you this, but there are no hard and fast rules that work 100% of the time.  However, there is a guideline we can follow.

Here’s Where Things Will Get a Little Confusing

This doesn’t work all the time.  Some verbs end in “eru” and “iru” but are actually う-verbs.  You’ll have to remember which group these verbs belong to by memorization.

Some of the More Common Group 1 Verbs Ending in る (Ru) Are:

There are only 2 irregular verbs in Japanese (thank goodness!).

Why Are They Irregular Verbs?

Because when we conjugate these two verbs, both the stem and suffix can change.

For every other verb, only the suffix will change when we conjugate it.

Things will get much clearer when we learn to conjugate verbs…which is up next!

Conjugating Japanese Verbs: 6 Basic Conjugations Based on the Hiragana Chart

In this guide, we’ll look at 6 basic verb conjugations based on the 5 rows of the hiragana chart.

The 6 Verb Conjugations We’ll Cover in This Guide

Why These 6 Verb Forms?

Group 1 / う-Verbs, also known as godan doushi (literally mean 5-step verbs) makes it easy to learn these verb conjugations.  They are all based on the 5 rows of the hiragana chart.  We’ll also learn how to change group 2 and irregular verbs to these forms as well.

This is the chart we will be using to conjugate group 1 verbs into the 6 forms listed above.

Let’s start by looking at the 3rd row of this verb conjugation chart.

Let’s first start with the plain form, also known as the dictionary form of verbs.

Just like the name implies, this the form of a verb you would find listed in a dictionary.

All of the examples above are listed in plain form.  If we look at the verb conjugation chart above, all dictionary verbs end with a suffix from the  3rd row (う-row).

Examples of Verbs in the Plain/ Dictionary Form

How the Plain / Dictionary Form is Used

A verb in the plain/dictionary form can express the present and future tense.  It can mean either “to do” or “will do (future tense).”

For example, the verb 食べる (taberu) can mean either to eat or will eat.

行く (iku) can either mean to go or will go.

The dictionary form of verbs are used in casual conversations, usually between friends and people who have the same or lower social status than you.

Let’s take a look at some examples.

Answering Questions with the Dictionary Form

Sometimes, you can answer someone’s question by just saying a verb in the plain form.

We’ll take a look at the formal/polite version (masu form) of verbs below.

What is the Negative Form?

The negative form in Japanese is used when you want to express that you won’t or don’t do something.

Here Are Some Examples:

Let’s learn how to make the negative form in Japanese.  Yoooshi!

To change a group 1 verb into a negative verb, all we need to do to take a look at our hiragana chart.

We know that the plain or dictionary form of a verb ends with a suffix from the 3rd row of the hiragana chart.

Steps to Change Group 1 Verbs Into the Negative Form

**An Exception to the Rule

However, for the negative form, “あ” changes to “わ.”

Example 2:  今日は学校に行かない。(Kyou wa gakkou ni ikanai):  I will not go to school today.

Changing る-verbs into the negative form is ever easier than う-verbs.

All you need to do is take the stem form of the verb and add ない (nai) to it.

Example 1:  朝ごはんは食べない。(Asagohan wa tabenai):  I do not / will not eat breakfast.

Example 2:  今日はジャケットを着ない。(Kyou wa jaketto o kinai):  I will not wear a jacket today.

The two irregular verbs, する (suru):  to do and 来る (kuru):  to come, have special forms that you’ll just need to memorize.

The stem of the verb 来る (kuru) is “ku,” but this will change to “ko” when we turn it into the negative form.

Add ない (nai) to this and we get 来ない (konai) as the negative form.

Example 1:  バレーボールをしない。(Barēbōru o shinai):  I do not / will not play volleyball.

What is the Masu Form?

The “masu” form (pronounced “mahs”) is used in formal or polite speech.  It is the formal and polite version of the dictionary form.

To change a う- verb into the “masu” form, we change the suffix by using the 2nd row of our hiragana chart (い-row).  Then we add “ます” to the end of the verb.  And presto!  You created the masu form of a verb.

Example 1:  日本に行きます。(Nihon ni ikimasu):  I will go to Japan.

To change a group 2 verb into the masu form, all you need to do is add “ます” to the stem form.

To make the masu form for irregular verbs, do the following:

Example 1:  イチローさんと野球をします。(Ichiro-san to yakyuu o shimasu):  I will play baseball with Ichiro.

This is very different from the way the imperative form is used in Japanese.

How the Imperative Form is Used in Japanese

For example, if you’re in the library and someone is making a lot of noise, you can tell them “黙ってください。” (Damatte kudasai).  This translates to “Be quiet!”  This statement, while it is a request, is quite bold and even rude, because there are other “nicer” ways to ask someone to be quiet.

However, when you use the imperative form, it makes your sentence sound very commanding.  Imperative form:  黙れ！(Damare!):  Shut up!

To make the imperative form, take the stem form of a verb and attach the suffix from the 4th row (え-row).

To change a る-verb into the imperative form, take the stem form of the verb and add either ろ (ro) or よ (yo) to it.

*Notice that the speech level is very informal.  Since you are giving a command to someone (probably of lower or equal status than you), speaking using polite forms would sound strange.

Let’s take a look at how to make the imperative form for the 2 irregular verbs.

*There is a second way to make the imperative form for する.  If you wanted to use the suffix よ (yo) instead of ろ (ro),  then you need to change the stem し (shi) to せ (se).

Example 1:  早く宿題をしろ！(Hayaku shukudai o shiro!): Hurry up and do your homework!

As seen above, using a suffix from the 4th row of the hiragana chart will change a verb into the imperative (command) form.

By using this same suffix and adding “ば (ba)” to it, we can create the conditional form of a verb.

What is the conditional form you ask?

Basically, it is an “if” statement.  If A happens, then B happens. / If you do A, then B takes place.

How the Conditional Form is Used in Japanese

The conditional form can be especially useful when speaking Japanese.  Anytime you want to say “if you do this, then this will happen” statements, you can use “ば (ba)” conditional form of verbs.  For example, “If you don’t study hard, you will fail your test.”  Check the sentences below for more examples.

How to Change a Verb Into the Conditional Form:  Group 1 / う-Verbs

To make the conditional form, take the imperative form of a group 1 verb and add “ば (ba)” to the end of it.

Creating the conditional form for group 2 / る-verbs is easy.

All you need to do is take the stem of the verb and add “れば (reba)” to it.

Example 2:  今日遅く寝れば、明日起きられないよ。 (Kyou osoku nereba, ashita okirarenai yo):  If you sleep late today, you won’t be able to wake up tomorrow.

To change the irregular verbs to the conditional form, you’ll add “れば (reba)” to the stem form of the verb.

Example 1:  この部屋を綺麗にすれば、チョコをあげるよ。(Kono heya o kirei ni sureba, choko o ageru yo):  If you clean this room, I’ll give you chocolate.

The volitional form expresses the speaker’s will to do something, as in “I will exercise.”  Notice that this is different from the plain form of verbs.

While sentences using the plain form of verbs can be translated using “will” (e.g., I will go home now.) this is to express the future tense of a verb.  It doesn’t stress the speaker’s will, or what they WILL do.  Verbs in the volitional form shows your intention to take action to do something.

Take the verb stem and add the suffix from the 5th row (お-row) of the hiragana chart.  Then add う (u) to the end of it.

Volitional Form:  I Will ~

Making the volitional form for る- verbs is simple.

Here’s how to make the irregular verbs into the volitional form.

That’s it!  You now know the basics of  conjugating Japanese verbs!   Check out our learning Japanese page if you want to learn more.  Good luck with your Japanese!