Home
Useful Japanese Lessons
What Does すみません (Sumimasen) Mean and How Do You Use It? 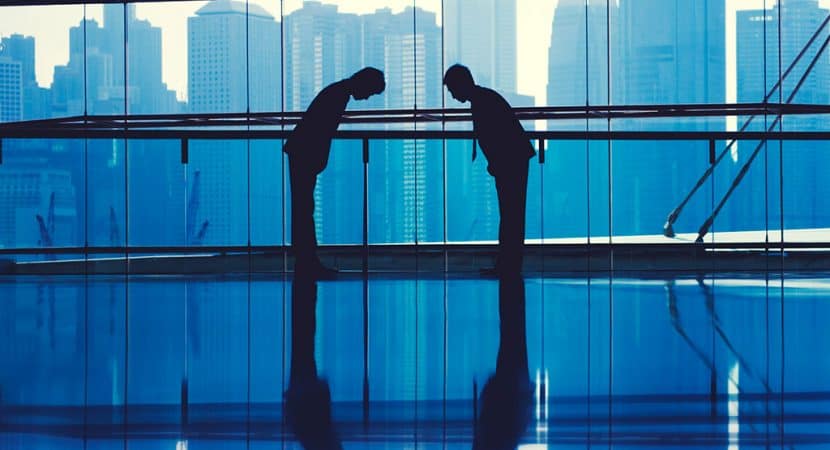 The word すみません (sumimasen) is one of the first words you learn in Japanese class. It is an ULTRA useful word used every day in Japan: in business and stores, talking to people, anime…pretty much everywhere. It doesn’t take long for learners to pick up on this word, which means “excuse me” or “sorry.”

However, you may be surprised at just how versatile すみません is. There are many different ways to use this word. In this article, we’ll break down all of the meanings that すみません can have, as well as how to use it in actual conversation.

すみません (Sumimasen) As “Excuse Me”

One of the most common uses of すみません is to say “excuse me.” This applies to both simple requests for forgiveness, like when you need to pass through a group of people on a crowded train or when you need to gain someone’s attention for conversation.

1. すみません、降ります。
(sumimasen, orimasu.)
Excuse me, I’m getting off.
(usually said while trying to get through or around a group of people on the train or bus).

2. すみません、駅はどこですか？
(sumimasen, eki wa doko desu ka?)
Excuse me, where is the station?

The above example sentence is one example of using すみません to gain someone’s attention, and it is often used when approaching people politely (to ask for directions, start a conversation with someone, etc.).

Another common use of すみません is as an apology. すみません is often used as a polite way  to say I’m sorry, especially when causing inconvenience to others. When apologizing, you can say すみません by itself, or you can combine it with the て (te) form of a verb, like the example sentence below:

2. こんなことになってしまってすみませんでした。
(konna koto ni natte shimatte sumimasen deshita.)
I apologize that it (the situation) has come to this.

ごめんなさい (gomen nasai) is also another common way to say “I’m sorry in Japanese.” So what is the difference between すみません and ごめんなさい?

While the two have the same meaning and usage, some people consider すみません to be more polite than ごめんなさい. It is true that すみません is used commonly used with strangers, superiors, or in other formal situations, but for most casual situations, ごめんなさい and すみません can be used interchangeably.

Of course, using ごめん (gomen), which is the short and casual form of ごめんなさい, is only used with friends, subordinates, and other situations where polite language is not necessary. Saying ごめん to apologize to someone who has a higher social status than you (your boss, your customers, teachers, etc.) would be rude and maybe even insulting. The same is true すまん (suman), the short and very causal version of すみません。

One way to apologize in Japanese is with the phrase is 失礼します (shitsurei shimasu), which is less common than すみません but may be confusing nonetheless.

失礼します is generally more polite than すみません. For this reason, it is often used in cases with superiors or people of importance. It is also used when entering the office or room of a higher-up (executive member of a company, your boss, etc.).

すみません (Sumimasen) As “Thank You”

The final meaning of すみません, which may be surprising, is that of gratitude. When someone serves you food, buys you a present, or does something nice for your without being asked, it is common to say すみません to mean both “sorry to trouble you” and “thank you.”

If you’re confused about the difference between すみません and the commonly known ありがとう, don’t worry; the difference is simple. ありがとう is a direct thank you, so you can say it any time someone gives you something or does something for you.

すみません, however, carries an additional connotation of slight apology, as mentioned above. Therefore, it’s more common to use it when you want to convey that you “feel bad” for making someone go out of their way to do something for you. In general, however, either can be used in most cases without issue.

すみません is a common and yet surprisingly deep word in Japanese to convey any of several different meanings. Learning all of them is a great way to widen your understanding of the phrase and its use, and it will also make your speaking sound more natural. Try to keep すみません in mind the next time you need to say, “excuse me,” “I’m sorry,” or “thank you,” and see how the conversation unfolds from there!