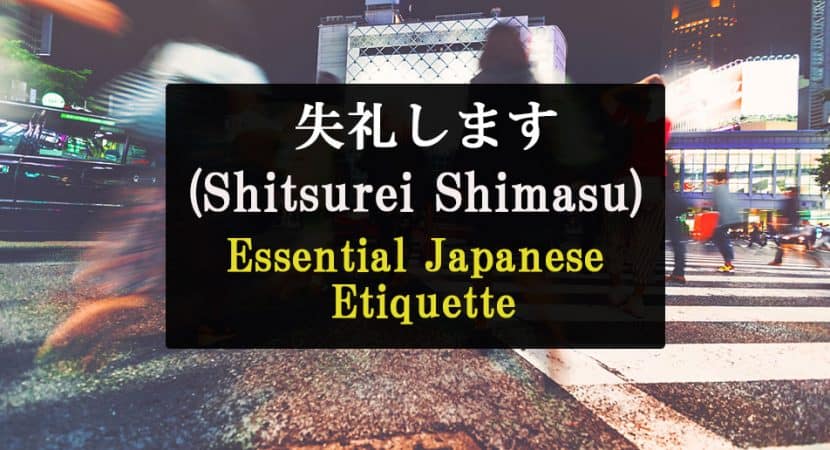 失礼します (shitsurei shimasu) is a staple phrase in Japanese work and school environments. It’s used to excuse oneself for doing something rude. 失 means flawed or defective, and 礼 means etiquette or manners. Put this word 失礼 with します, or to do, and you’ve got 失礼します: “to do something rude.”

A good English translation of 失礼します would be “Excuse me” or more literally, “Excuse my rudeness.”

The phrase 失礼します is almost exclusively used in professional or learning environments. It’s a golden phrase that you would often use if you work in Japan. It has a few different nuances depending on when or why it’s used in the workplace. Japanese students are also required to use 失礼します in specific situations.

If you’re working at a job that requires you to use the phone a lot, you might find that 失礼します is a constant in your daily conversations with clients.

失礼します (shitsurei shimasu) is a polite phrase to use at the end of a phone conversation. A phrase like, “ありがとうございました。失礼します。” or “Thank you very much. Excuse me.” is ideal for office phone calls. You will also use 失礼します if you want to apologize for some minor inconvenience. For example, if you have to put someone on hold in the middle of your conversation, you would say 失礼しました (shitsurei shimashita – past tense) to apologize for the interruption.

Another office situation that requires 失礼します is a visit to your superior’s office. When you knock on your boss’ door and have received permission to enter, do so while saying, “失礼します。” It’s like saying “Pardon my intrusion” in English and is the proper thing to say in Japanese.

Office workers in Japan will also say 失礼しました (shitsurei shimashita – past tense) when leaving their superior’s office to apologize for the interruption. This same etiquette is essential if you’re going to work for a Japanese company or when you have an in-person interview; in fact, people have been dropped from their interviewer’s lists by failing to observe 失礼します etiquette! There’s no denying that the phrase 失礼します is key to making a good impression.

Most importantly, you’re probably expected by your Japanese coworkers to say 失礼します when you’re leaving for the day. There’s a special phrase for this: お先に失礼します (o saki ni shitsurei shimasu). It means, “Excuse me for leaving ahead of you.” We’ll delve into this phrase a bit more later on.

In Japan, the public schooling system is another way of priming students for their futures in Japanese companies. Naturally, 失礼します is taught from an early age. Students are required to say 失礼します/失礼しました when entering or leaving the principal’s office from as early as the first grade in elementary school! The phrase is also required when the student has an errand at the teaching staff room; they often won’t be allowed through the door until they’ve correctly asked for permission to come in. Students must also say “失礼しました” when they leave.

School and work aren’t the only places you might need to say, “Excuse me.” 失礼します has several daily uses as well. For example, if you accidentally cut in line at the store (sometimes the lines for waiting are confusing!), saying “失礼しました (shitsurei shimashita)” and letting the person go ahead of you is a good way to dissolve any tension. Of course, すみません (sumimasen), another way of saying “Excuse me,” is fine as well; however, 失礼しました is even more polite. Japan is a country in which you can never be too polite.

You can also say, “失礼しました” if you’ve burped or yawned in front of someone else.

Considering 失礼します as the Japanese equivalent of “excuse me” is the best way to solve your worries about when to use this phrase. If you would say, “excuse me” English (as an apology), it’s probably fine to say, “失礼します” in Japanese.

“失礼します” is a way of apologizing for and announcing a rude thing you are about to do. 失礼しました is closer to an actual apology: it’s asking pardon for something you’ve done already.

For example, when entering your boss’s office, you would say, “失礼します。” After all, you haven’t entered the room yet. “失礼しました” is for when you leave. Think of the two in this situation as, “Excuse me, I’m coming in” and “Sorry for the intrusion.”

Here are some common phrases that use 失礼します. Get ready to take some notes!

As we mentioned earlier, this phrase is essential in a Japanese workplace. When clocking out for the day, be sure to say, “お先に失礼します (o saki ni shitsurei shimasu) to your boss and coworkers, or they might consider you to be a bit standoffish. While the literal translation of this phrase is, “I’m sorry for being rude and leaving ahead of you,” its nuance is less apologetic. Consider お先に失礼します as another way of saying “I’m heading out/home.” This way, your coworkers know you left and will not have to wonder where you are if they need you.

You may also notice that some workers with higher seniority or a higher rank (like your boss) might just say お先に (osaki ni). This shortened version is okay to say to your coworkers who are at the same or lower status than you. You would not say this to someone with a higher position than you (like your boss, the president of the company, etc.).

失礼いたします (shitsurei itashimasu)has the same meaning as 失礼します; it’s simply a humbler form of the phrase. This form is ideal if you are about to end a more formal phone conversation or if you are saying goodbye to a customer. We’ve talked about polite and humble Japanese before (check out this article on Japanese keigo). By saying いたします instead of します, you’re humbling yourself and elevating the person to whom you’re speaking at the same time.

On the opposite side of the spectrum, 失礼 without the します verb at the end is a more casual way of excusing yourself. You would say this among friends or family. A great example of this would be a dad burping at the family table and saying, “失礼,” or “Excuse me.” Again, this is casual Japanese—only use it with your inner circle or among people who are younger than yourself!

The phrase 失礼します is an essential one in Japanese etiquette. You can use it when trying to walk through a crowd, when you’re entering your boss’ office, or when you’re saying goodbye on the phone. Like almost all Japanese, 失礼します has both formal and less formal expressions. So long as you don’t mix these up, 失礼します is a valuable tool to have in your verbal arsenal. Consider it the Japanese version of Excuse me.