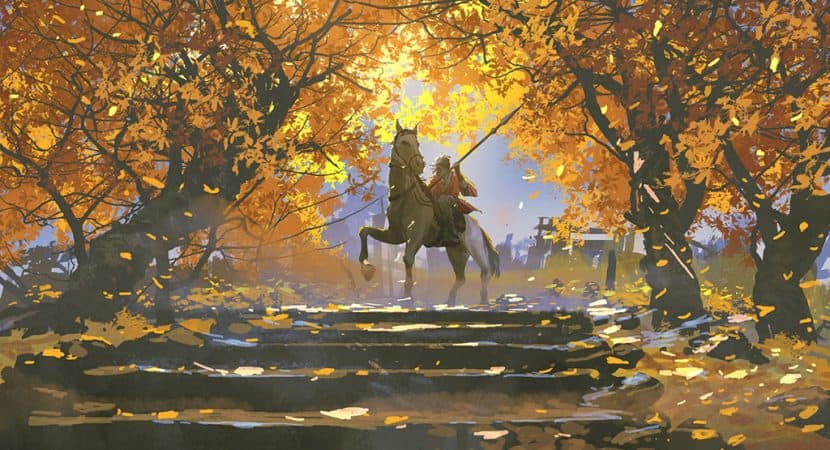 The immense variety of settings available in manga is one of the medium’s strengths, and nowhere is that clearer than in the realm of historical manga. Whether you’re interested in 20th Century gun battles, Three-Kingdoms era politics, or French royal romance, there’s always something new to discover. Here are the top 10 historical manga to get you started on your journey.

A recently completed series that has earned significant praise, Golden Kamuy takes place in the early 1900s in snowy Hokkaido. It tells the story of an ex-Imperial Army soldier and an indigenous Ainu girl teaming up to find a trove of legendary gold. The map to the gold is tattooed on the bodies of a gang of former convicts, so the only way to the treasure is through them: one by one.

The way this series treated Ainu culture is always a delight and guarantees the reader will walk away having learned something. Action-packed and exuding manly vigor, this is a series for those who want plenty of guts and gore with their history.

Check out volume 1 of this awesome manga here on Amazon: Golden Kamuy, Vol. 1

You can find other volumes on this series here: Golden Kamuy manga series

When it comes to historical manga, some artists aim for accuracy and realism, while Yana Toboso’s Black Butler relishes experimentation, spectacle, and fantasy. Set in a Victorian London full of gothic flair, this romp of an action series stars Earl Ciel Phantomhive, a boy who forms a pact with a demon named Sebastian to pursue and destroy the mysterious group who murdered his parents.

Filled with slick fashion, chainsaws, idol groups, supernatural beasts, and the iconic ikemen charms of butler Sebastian, who could resist its charms?

Other volumes in this series can be found here: Black Butler manga series

This manga recently received a surge in popularity by a well-received anime adaption.  Vinland Saga is a windswept, gnarly Viking epic. Telling the tale of Danish-controlled England in the 11th Century, several characters are based on actual Vikings, and the series draws inspiration from the historical sagas of the period. The protagonist Thorfinn is modeled on Icelandic explorer Thorfinn Karlsefni, making Vinland Saga a mixture of history and drama.

We follow the hotheaded teenage Thorfinn as he joins a band of mercenary Viking warriors. The catch? The crew’s chief, Askeladd, murdered Thorfinn’s father, and the only way he can take revenge is by excelling as a crew member and earning Askeladd’s trust. Once achieved, Thorfinn can challenge Askeladd to a duel, kill him and finally avenge his family.

A set with volumes 1-12 of the hardcover edition can be found here: Vinland Saga Manga Set, Vol. 1-12

Other volumes of this manga can be found here: Vinland Saga manga series

An abstract, high-concept series, 20th Century Boys is a meditation on Japan’s post-war youth culture and the inevitable destruction of childhood dreams and creativity that adulthood brings. It’s a must-read for those interested in Shōwa era history, philosophy, and culture.

Stretching between the years 1969 and 2017, 20th Century Boys tells the tale of a group of friends as they battle against a mysterious cult intent on destroying the world. Yet the secrets of the chaos around them seem to be held in a book they wrote together when they were kids…

Another work of historical fantasy rather than historical accuracy, the 7th part of the wildly popular JoJo’s Bizarre Adventure series takes place in 19th Century America. It’ll take reading the first 6 JoJo Parts to get the full effect and nuance of Part 7- but it’s truly worth it.

Follow Johnny Joestar as he sets out on the “Steel Ball Run” horse race across America. This series blends Hirohiko Araki’s immaculate art and avowed passion for the American West with flashes of real-life history, myth, legend, and intense stand battles.

For those of you who can read Japanese, the Japanese edition is on Amazon here: Steel Ball Run [Japanese Edition] Vol.1

Using manga to tell creative tales of wondrous fiction is always a treat. However, it is even more amazing to use manga to tell historical stories as they actually happened, transporting the reader directly into the past.

Vagabond is a manga biography of the real-life swordsman Musashi Miyamoto, a samurai who lived between the years (1584 – 1645). Wielding some of the most stunning art ever seen in manga, Vagabond offers a sincere and outstandingly executed study of a figure everyone should learn about.

Get volume 1 of the 3-in-1 edition on Amazon here: Vagabond, Vol. 1 (VIZBIG Edition)

You can check out other volumes of this Vagabond here: Vagabond manga series

A charming manga that helped inspire interest in Victorian London and maid culture among otaku.  Emma is a gorgeously drawn manga about the understated but gripping love story of a young nobleman William and his maid Emma. Creator Kaoru Mori’s passion for everything British shines through in every panel, touching on issues of class difference, poverty, family expectation, and period politics.

Falling in love was the easy part, but can William and Emma cross the divides that separate them and be together?

Check other volumes of this series here: Emma manga series

Enormously popular in Japan but lesser-known internationally, Kingdom’s hefty 65 volumes truly bring ancient history to life. During the Warring States period of Chinese history, Kingdom follows the poor orphaned Xin as the slaying of his friend Piao drives him to rise through the ranks of the military to unite all of China under King Zheng of Qin and claim the title of “Greatest General in the World.”

Kingdom is a must-read for history buffs. While well-known throughout East Asia, the Warring States period is generally under-studied in the west.  Kingdom is a solid starting point for those curious to learn more about this foundational period of history.

If you can read Japanese, the Japanese version is on Amazon here: Kingdom 1 (Young Jump Comics)  Japanese Edition

A samurai classic, Lone Wolf & Cub introduces Ogami Ittō, the Shogun’s trusted executioner in his quest for revenge against the Yagyū clan who slaughtered his family. With his son Daigorō by his side, the contrast between the loving relationship between father and son and the hostile world they face is why this series is seen as such a classic.

Simple in its premise but perfectly executed, the series has had a major influence on media across the East and West. Including Frank Miller’s Sin City, Ronin comics, and even The Mandalorian TV series. If traditional samurai thrills are what you’re looking for, Lone Wolf & Cub is one of the greatest ever.

You can get volume 1 of the omnibus version of this unforgettable manga on Amazon: Lone Wolf and Cub Omnibus Volume 1

You can find the other volumes of this series here: Lone Wolf and Cub manga series

Set at the outbreak of the French Revolution, we see the contrasting tales of Queen Marie Antoinette and the Captain of her Royal Guard, Oscar François de Jarjayes. Born a woman but raised as a man, Oscar must navigate a France of privilege and deference, while Marie exists as the very heart of that world.

Surrounding them is a France groaning under the weight of its fading imperial might, as its forgotten poor and oppressed gather their forces for revolution…

Of course, there’s so much great historical manga that there will always be debates, discussions, hidden gems, and long-lost series to discover. Use these top 10 historical manga picks as a starting point for your discoveries!

Check out volume 1 of this amazing series on Amazon here: The Rose of Versailles Volume 1

You can also find other volumes of this series here: The Rose of Versailles manga series

Sam L Barker is a marketing professional with years of experience working in software and technology. He is also a freelance writer and editor focusing on the areas of Japanese culture, music, technology, the internet, and business. He used to teach English in Tokyo and loves night walks through the city.