Home
Places to Visit
The Top 10 Festivals in Japan 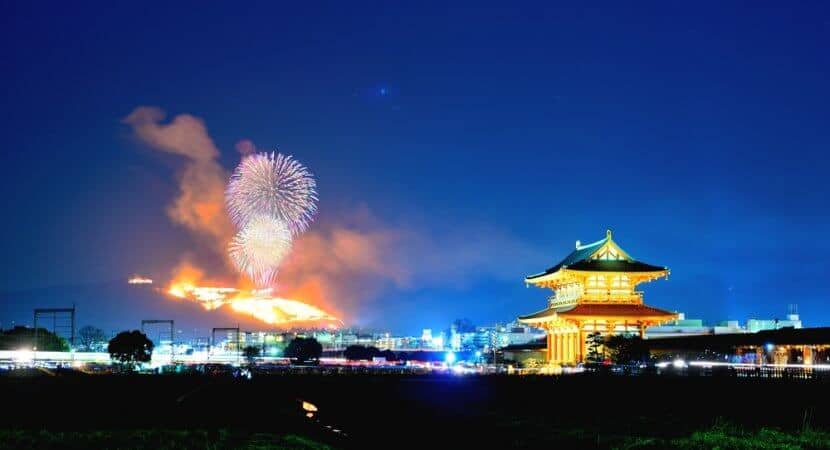 Japan has thousands of festivals each year.

The cherry blossom festival and summer-time firework displays take place all over Japan. Each city and town also have their own celebrations showcasing the local flavor unique to that part of the country.

Attending a local festival is a great way to see another side of Japan and try something new.

The Grass Burning Festival is unique and well worth visiting.

Mt. Wakakusayama used to be a volcano. You’ll get a pretty good sense of what an erupting volcano looks like if you visit this awesome event.
Origins

There are several ideas about the origins of Yamayaki. Some say the festival has roots in the extermination of harmful insects. Others say the original purpose was to drive away wild boars or to settle a disagreement about land ownership.

Whatever the story behind it, this is one of the most spectacular festivals in Japan. It’s an amazing sight.

Flaming torches are lit at the Kasuga Taisha Shrine and carried to the mountain. Then, from the base of the mountain, members of various shrines set the whole thing ablaze.

A fireworks display occurs just before the burning. Naturally, the fire brigade is on hand to keep everything under control.

Check out the video to see the fireworks display and lots of fire.

A kamakura is a cave carved out of snow. At the time of the festival, there are many to be seen in Yokote City.

Historically, kamakura were built to pray to the Gods for a year of good crops and clean drinking water.

The main event takes place at the Doro Koen Park. You can also see kamakura at the Yokote Minami Primary School.

Remember to dress warmly for this snowy event!

Check out this beautifully shot and edited video of this festival.

If you Google “weird Japanese festivals” this comes out as one of the top results, and it’s easy to see why.

Started in 1977,  it’s nowadays more a tourist attraction than a local festival. The festivities raise money for HIV research.

Legend has it a demon with particularly sharp teeth hid inside a young woman’s vagina. Jealous because she rebuked his advances, he bit off the manhood of her suitors.

The woman received help from a blacksmith who fashioned an iron phallus to break the teeth of the demon. The iron phallus is on display at the Kanayama Shrine.

Several giant but well-proportioned phalli are on display.

Men and women get decked out in phallic themed fashion. Penis t-shirts, hats, masks, costumes, and wooden souvenirs flood your field of vision. You’ve never seen anything like this.

Revelers can treat themselves to a penis-shaped vegetable or snack.

Check out this video to get an inside look into this “interesting” festival.

Parents will usually do anything to get their little ones to stop crying. At this unusual festival at the Sensoji Temple in Tokyo, the opposite is true.

The aim of the game is to get your baby crying the loudest and the longest. Being number one is believed to ensure a long, happy life for the unfortunate toddler.

Babies under a year old can compete. They’re held by beefy sumo wrestlers who do their best to make their young charges burst into tears.

Various techniques get the little ones crying. The wrestlers wear gruesome masks to frighten them and shout “Cry! Cry!” at the poor things!

You might think this festival is one of those strange aspects of modern life in Japan. Actually, the tradition is over 400 years old. It’s a popular event, with dozens of infants competing each year.

Check out the video if you love to see and hear babies crying…or not!

Nakatajima is one of the biggest sand dunes in Japan. It’s a spectacular site for the Kite Fighting Festival, as it overlooks the Enshunada Sea.

The festival has always been symbolic of strength and power.

It harks back to a 16th-century celebration of the birth of a baby boy to the local Lord. You may be familiar with koi-nobori, the carp streamers popular on Boy’s Day. They have the same origins.

Over 100 kites take part in the fight.  With some measuring up to 3.5m in length and width, you don’t want one to come crashing down on you!

The owners use a variety of tricks to get the strings of their kite to loop around the strings of another. Twisting in such a way snaps the string and defeats the opponent.

It’s exciting to see and even more exciting if you get to take part. If you can’t compete in the contest, you can still fly your kite with other amateurs on the grounds nearby.

Check out this video to see the flying kites in action.

This festival started in 1969. Locals invented it to try and give a sense of solidarity and camaraderie to the people of Furano.

Furano’s a small town with inhabitants spread out over a wide area. The festival gives them a reason to come together and celebrate.

The first year it ran, the spectacle had only 11 participants. Since then, it has become one of the most popular events in Hokkaido. In recent years up to 5,000 people have taken part in the two-day dance activities. Thousands more come to watch.

It’s a fun, light-hearted event. Participants turn the middle part of their body into a large, comical face. They use body paint, props, and vivid costumes. It’s quite something to see all these lively people shimmying their way through town.

Whole families take part. Popular characters like Anpanman and Super Mario are featured in body paint designs, as are traditional Gods and Spirits. Prizes are given to dancers for their efforts.

It seems like the idea behind the festival — camaraderie — has come to fruition.

Check out this video for a glimpse into this unique festival.

Japan's Belly Button Festival All About Celebrating The Navel

Fukuoka is famous for festivals, and this is the biggest one of the year.

The festival centers around the Kushida Shrine.

Beautiful floats are carried around for a lively and exciting parade. Each float weighs up to one ton. The height reaches 10 meters – pretty impressive when you stand at the base.

The float bearers are strong young men. They’re decked out in mizu-happi (a short coat, usually in white or blue) and haramaki (a tight stomach band). On the bottom half, their shimekomi, aka, loincloths…leave little to the imagination.

The men wear knee-length kyahan and jika-tabi (cloth leggings and split-toed shoes). Their kakinawa (rope) tucks into their loincloth like a lasso. They look like Japanese cowboys who left their hats (and pants) at home.

The history dates back almost 800 years. The Hakata Gion Yamakasa festival has an enduring popularity.

Check out the video to see what happens at this festival.

About an hour outside of Kumamoto, Yamaga is usually a quiet little city. The city springs to life with the Lantern Festival.

Known as one of the great Fire Festivals of the area, it has roots in an ancient story about the Emperor.

Travelling to Yamaga, the Emperor and his party were blinded by fog and became lost. The people of Yamaga lit a multitude of pine torches to light the Emperor’s way.

In the festival, local men re-enact this scene with lanterns. 1,000 women with gold and silver lanterns on their heads perform a slow, mesmerizing dance.

Other events in Yamaga around festival time include a firework display. The grand display uses over 4,000 fireworks to light up the sky.

Check out the video below to see what happens at this beautiful festival.

One of the most famous delicacies of Kumamoto is basashi. Basashi is raw horse meat served like sashimi, usually with ginger and garlic. It isn’t surprising to learn the city has a major festival involving horses.

There are several stories about the origin of this festival. Some involve sexual connotations and conflicts with Korea. No matter what the origin of the festival, you don’t want to miss the parade.

The parade features teams in matching costumes dancing alongside their horse. The horse is also dressed up with all kinds of accessories. Together they stroll down the central shopping area and through the middle of Kumamoto.

From early in the morning, there’s a lively commotion along the parade route. If you’re so unlucky as to live nearby, you’ll be awake from the noise by about five or six in the morning.

Spectators and team members alike tend to partake of strong beverages early in the day. It used to be the horses drank alcohol, too. Tradition has faded out in recent years following pressure from animal rights groups.

To see exactly what happens during this festival, check out the video below.

Taking place on the tiny island of Miyako-jima, this is one of the messiest festivals in Japan.

The basic premise of the festival:

The Paantu (supernatural spirits) will smear everything and everyone around them in mud. This brings good luck and wards off evil spirits. The tradition goes back hundreds of years.

Local men dress up in foliage and mud, sporting scary wooden masks and long wooden sticks. They look like something out of a Studio Ghibli film.

The men have free range to walk around the town and cover anything in mud. It’s all in the name of blessing it and bringing good luck.

Newly built houses, fashionable cars, passers-by… all fall victim to the sticky hands of the Paantu.

This is the one time of year when youngsters need encouragement to get caked in mud. Given the scary appearance of the Paantu, it’s not surprising they hesitate to join in!

It’s pretty creepy but you can see what goes on during this festival in the comfort of your home by watching this video.  Not even babies are safe from the Paantu!

To Sum Things Up

Well, there you have it – some of the weirder and more wonderful festivals Japan has to offer.

It doesn’t matter where in Japan you go; every area has its own special celebrations. If you visit at the right time of year, any event is worth going to for a hint of local flavor.

How are these festivals different when compared to celebrations in your home country? Leave us a comment and let us know which festival you’d most like to go to!