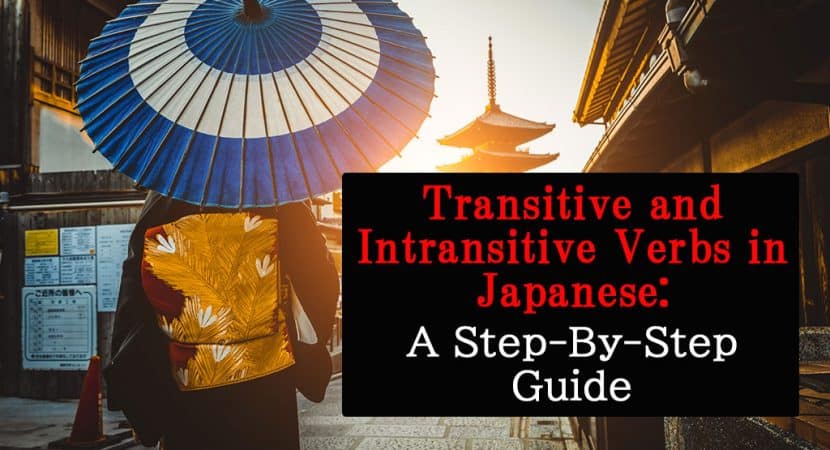 If you’re speaking English, you probably don’t think much about whether your verbs are transitive or intransitive. In Japanese, though, the difference matters a lot. You might have to use a different sentence structure or even a different word!  First, you might be wondering…

What Are Transitive and Intransitive Verbs?

A transitive verb is a verb that is being done to something. For example, in the sentence “I’m eating popcorn,” the eating happens to the popcorn. That means “eat” is a transitive verb.

An intransitive verb, on the other hand, has no particular target. “Walk” is a good example. In the sentence “Susan walks,” the walking isn’t happening to anything; it’s just something Susan is doing.

In English, some verbs can be used both ways. If you say, “Lisa opened the door,” Lisa is doing the action to the door. That means “opened” is transitive in this sentence.

However, in the sentence, “The door opened,” no one is doing anything to the door. It’s doing the opening all on its own. Creepy! Are you sure this house isn’t haunted? Anyways, here, “opened” is intransitive.

Transitive and intransitive verbs are similar in English, so you might not think about them much. In Japanese, though, there are important differences between the two verb types.

First, each verb can only be used one way—either transitively or intransitively, never both. That means that there are multiple Japanese translations for an English word like “open.”

Once you decide which verb you’re using, there are also differences in how you make a sentence with intransitive versus transitive verbs. Both types are used all the time in Japanese. You need to know how to create and understand both types of sentences.

How to Make Sentences With Intransitive Verbs

Sentences with intransitive verbs are straightforward. This type of sentence only needs two parts:

First, you’ll need an intransitive verb, like one of these:

Others, like 閉まる (shimaru) “close,” sounds like it would be a transitive verb (i.e., I closed the window.). However, shimaru is describing the state of something rather than the action of closing it.

Since you don’t know who closed the window, you can only describe its state with the intransitive form of “close.”

If you saw Jeff closing the window, then you could use the transitive form of the verb 閉める (shimeru) and say:

Once you’ve got an intransitive verb, you need a subject—a person or thing who’s doing the action. It’s easy to recognize the subject in Japanese because it’ll usually be followed by が (ga).

が (ga) is a particle called the subject marker, and it always comes right after the subject of a sentence. So to make a sentence, you have your subject, then が (ga), and finally your verb:

Voila! This is a very typical intransitive verb sentence.

Sometimes you might use は (wa) instead of が (ga). は (wa) is another particle; it’s called the topic marker because it sets the topic being discussed. The difference between は (wa) and が (ga) is notoriously subtle, but for making a basic intransitive verb sentence, either one will work. So, this is also a correct sentence:

The closest you could get to an English translation for this is, “Somebody slept, Mr. Tanaka.” But that doesn’t make sense, right? That’s why it’s important to use the correct particle. If you mix them up and use を (o) in an intransitive verb sentence, things get confusing.

How to Make Sentences With Transitive Verbs

Once again, the first step is choosing a transitive verb like one of these:

If you compare these to the earlier list of intransitive verbs, you’ll see that many of the same kanji, or Chinese characters, show up in both lists. For example, 開 is used for both versions of “open,” and 消 is used for both “erase” and “vanish.” That shared kanji shows you that the words have similar meanings. But the hiragana that follow the kanji are different; 開ける (akeru) is the transitive version of “open,” while 開く (aku) is the intransitive version.

Because of the hiragana, you can see that these are different words. Unfortunately, there’s no reliable pattern to differentiate between transitive and intransitive verbs. You’ll have to memorize each word. However, as you start to learn more words, you will find similarities between some verbs.

If you’re unsure which type a verb is, you can look it up in a Japanese-English dictionary! I like jisho.org because it’s free to access and clearly displays this information.

Once you’ve chosen your transitive verb, the next step is making a sentence. Once again, it’s important to remember your particles. Same as before, you’ll need the topic marker は (wa) or the subject marker が (ga) after your subject. But here is where the object marker を (o) really shines. Only transitive verb sentences can have an object, so it plays an essential role in this type of sentence!

In this sentence, 田中さん (Tanaka-san) “Mr. Tanaka” is followed by が (ga), so it’s got to be the subject of the sentence—the person doing the eating.

お寿司 (osushi) “sushi” is followed by を (o), so you know it’s the object—the thing being eaten.

What happens if you switch things around? Well…

English sentences have a fixed order: subject/verb/object, e.g., “I threw the ball.”

In Japanese, though, you can move words around. The particles tell you what each word is doing, so while the subject/object/verb pattern in the first example is the most common arrangement, you can also say object/subject/verb.[*]

But you have to get your particles right. If you mix them up, the whole meaning of your sentence might change!

[*]Note: This switch is only done if you want to emphasize the subject heavily. In this example sentence, you’re emphasizing that it’s the sushi that ate Mr. Tanaka—not a lion or a tiger or Godzilla, but the sushi! If you’re speaking neutrally, without that emphasis, the subject/object/verb is the more natural word order.

How to Tell if a Sentence Is Transitive or Intransitive

How do you know if the sentence you want to say will use a transitive or intransitive verb?

On the other hand, if your sentence doesn’t have an object in English, the odds are good that you need an intransitive verb. Sentences like “The book opened,” “I fell,” and “The lights will turn off” have someone or something doing an action, but the action has no target object. For these, you should use an intransitive verb. Just do what sounds natural!

Now you know the difference between transitive and intransitive verbs, and you know how to make sentences with each type in Japanese. But the most challenging part about learning a language isn’t memorizing vocabulary or sentence patterns—it’s knowing when to use what.

The good news is, both transitive and intransitive verbs are a natural part of everyday conversation in Japanese, so you don’t have to try to avoid either type. You can use whichever makes the most sense for what you’re trying to say.

Transitive and intransitive verbs can be tricky at first, but once you know the difference, you’ll be using them like a natural in no time. Remember to use the correct type of particles and verb for what you’re trying to say. From there, you’re well on your way to speaking Japanese!