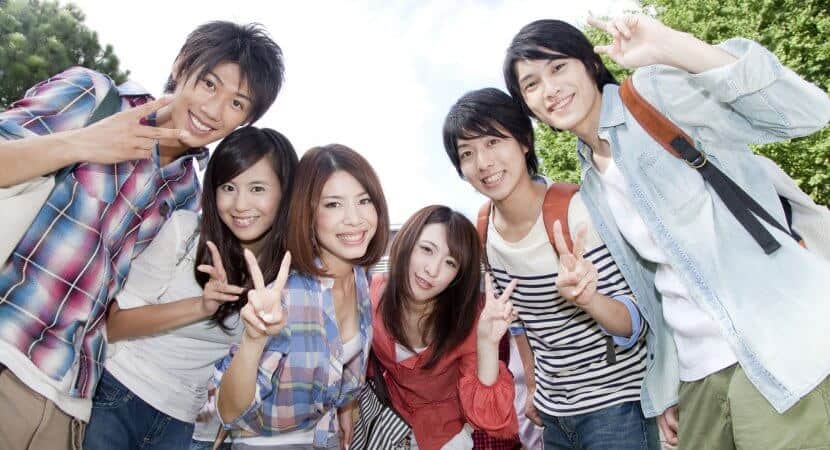 One of the best ways to learn the Japanese language and culture is to make Japanese friends.But for many of us, meeting someone new can be hard – and awkward – and it can take us out of our comfort zone.And if you’re still learning how to speak Japanese, it may seem intimidating or even impossible to reach out to new people.

The phrases in this article are very basic, but can help you a lot when you first starting learning Japanese.  The main thing is to try and use what you learn.  So be sure to challenge yourself and give these phrases a try!

To be Polite or Casual?

The phrases in this article are meant for making friends, not for meeting people in the business setting.

The language you use to meet new people is very different, depending on the setting and on who you are meeting.

This article focuses on meeting new people in a social, casual setting, where the language typically starts off in polite form but may (or may not) gradually shift over to casual form at any point in the conversation.

When to make the shift to casual speech depends on how the conversation is going, how old you and your new friend are, what kind of vibes you are both giving off – it’s really up to you to decide.

To be on the safe side, it’s always good to be more polite than too casual when it comes to speaking with someone new.

You can always switch later to casual form, to avoid offending anyone.

Where to Start:  Greetings

To greet someone you’ve just met in Japan, you’ll use the phrase:

If you want to be extra polite, you can add:

There really isn’t an equivalent phrase in English for this, but it kind of means, “Please treat me well.”

If you are introducing yourself, you can add your name in:

And again, if you want to be very polite, you can add: “よろしくお願いします.”

If it’s a casual conversation, adding “よろしくお願いします” might sound too formal and stiff, and wouldn’t feel very natural.

Sometimes people will simply say “よろしく” in a more casual conversation instead.

Check out this video lesson teaching you how to introduce yourself with basic Japanese sentences.  You’ll have to put in your e-mail address, but there are tons of free audio and video lessons you can listen to.  Or if you prefer audio, check out the basic introduction audio lesson.

What’s in a Name?

To ask someone what their name is, you can ask:

The key word in this phrase is 名前 (namae), which means “name.”

If you hear this word when someone is asking you a question, it’s likely they are asking for your name.

In which case you can answer:

Or you can simply reply:

Where Are You From?

Another common question for when you’re meeting someone new is to ask where they are from.

In either phrase, the key word is listen for is 出身 (shusshin), which means “person’s origin,” or simple put, “where are you from?”

If you want to reply, you can simply say your country’s name followed by the sentence ending です (desu).

Check out this audio lesson on how to give a more formal introduction in basic Japanese.

Where Do You Live?

It’s always interesting to find out where people live, and the way to ask someone this in a very polite way is:

To answer this question, you can say the name of the neighborhood/city/country like this:

Or you can say:

What Do you Do For Work?

This is a question that usually pops up in a first meeting and the key word to listen for is 仕事 (shigoto), which means “work.”

To answer this question, you can answer in several different ways.

For example, if you are a yoga teacher, you might say:

ヨガの先生です。(Yoga no sensei desu.) “I am a yoga teacher.”

Or you can say:

This literally translates to “I do yoga teacher,” which doesn’t sound right in English, but it’s a type of sentence structure that is often used in Japanese. However, the meaning becomes “I’m a yoga teacher.”

You can also say:

If you’re a student and not yet working, you can say:

You may then be asked:

何を勉強しているんですか？ (Nani wo benkyou shite irundesuka?)
English: What are you studying?

What Are Your Hobbies / What Do You Like to Do?

A great way to get to know someone is to find out what they like to do in their free time.

To ask someone what their hobbies/interests are, you ask:

あなたの趣味はなんですか？(Anata no shumi wa nandesuka?) English: What are your hobbies/interests?

To answer this question, you would say what your hobby is, followed by です (desu).

If you are starting to click with your new friend, or if you’re around the same age, then it’s not uncommon to switch from polite to casual speech sometime during your conversation.

Younger Japanese people tend to switch to casual speech pretty quickly with each other, or even start off with casual form.

Again, it’s a good idea to always start with the polite form to avoid offending anyone. You can then feel it out a bit before taking it down a notch.

However, speaking to someone politely for too long can create a sense of psychological distance between you.

So when the time feels right, definitely try making a gradual transition to casual form if you want to be friends.

Maybe you can try a mix of both polite and casual speech for a bit until you’re sure the other party is cool with it.

Here are ways to suggest getting together again:

Or a variation of the casual form:

A key word to listen for is 遊ぼう (asobou), which literally translates to “play,” but in Japanese it usually means “let’s get together and do something.”

Going out drinking together is a common way for new people to hang out in Japan.

If you want to ask someone to go drinking with you in polite form, you can say:

Or if you’ve switched over to casual form:

Now, we all know that “Let’s get together sometime” doesn’t always mean that you’ll actually get together.

But what if you do actually want to hang out with someone you just met?

Try this phrase if you’re in polite form:

Or you can try making more concrete plans, like this, in polite form:

And if you’re already buddies, you can use the casual form:

Making new friends can be a bit of a scary thing – you don’t know anything about each other and you’re not even sure if you’ll like each other.  But these basic phrases can help you out when you’re just starting to meet people in Japan.

You may even find that you can use a lot of English peppered in and still communicate, as more Japanese people are learning and speaking English lately.And there are more English words being incorporated into Japanese, some of it as legitimate words and others as more slang-type words.The most important thing to remember about meeting new people is to start off speaking to them using polite speech.Starting with the casual form right off the bat might seem a bit disrespectful, or just too intimate.

Finding the right balance of being polite yet friendly and open can be difficult (even for Japanese people), but once you overcome that hurdle, and cross over into speaking casually all the time, you won’t have to worry about it anymore.

So go ahead, make some new friends, and don’t forget to use these useful phrases!  If you would like to learn more Japanese with fun and easy to understand lessons, check out our review on Japanesepod101.com.

What are some phrases you’ve encountered when meeting new people?

Has it been easy or difficult making new friends in Japan?

Please let us know in the comments!