Home
Useful Japanese Lessons
What is Naruhodo in Japanese, and How Is It Used? 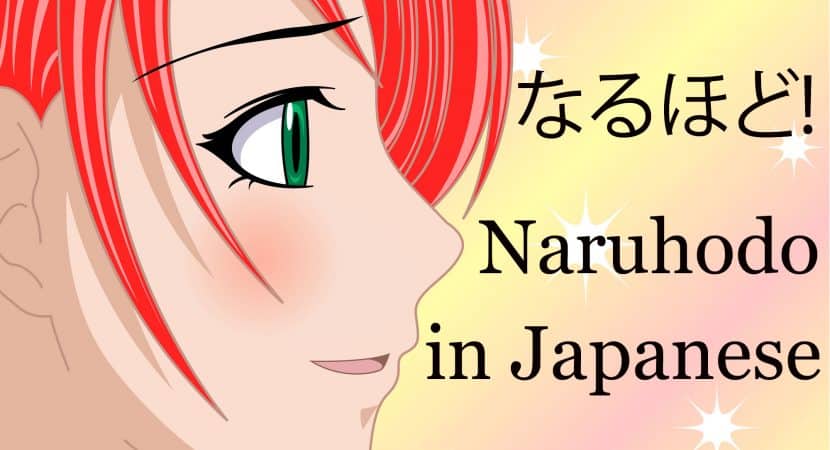 Japanese speakers often use the word Naruhodo(なるほど) in everyday conversation.  Learning how to use naruhodo correctly can make your Japanese sound very natural.  However, you need to be careful in certain situations, as misusing the word can lead to awkward conversations. So let’s take a detailed look into the naruhodo, as well as similar expressions you can use in conversations with Japanese speakers.

What Does Naruhodo Mean?

Naruhodo is an exclamation to express the feeling of being convinced by the opinions of others. Naruhodo originally means “as much as possible” or “as hard as possible.”

Today, it is mostly used as a term of agreement, understanding, and conviction.

When someone tells you something that you didn’t know, that feeling of “Ahhh I see!”  or “Ahh okay, I got it now.” describes naruhodo well.

Example of the Nuance of Naruhodo

Imagine you’re at work and having computer trouble.

You:  This computer froze.  I can’t get it to work!

Co-worker: Did you try restarting it?  That usually works for me.

Or if someone gives you new information that you agree with, you can use naruhodo to show your understanding of what they said.

Co-Worker:  We started using this new program for work.  You’ll need to run the program whenever you turn on the computer.  If you don’t, the computer will freeze.

Adding a Japanese particle at the end of Naruhodo, such as ね(ne) or な(na), changes the nuance to be more casual and friendly.

Adding “ね” to the end of a sentence works to seek agreement from the listener.  I’ll put the nuance of “ね” in parenthesis in the English translation section.

This is used by both male and females.

English Translation: Indeed, he’s up there in age, but he is powerful (isn’t he?).

Adding “な” to the end of a sentence is similar to ね, but usually is to express your own desires.

English Translation:  I want to go to France (so much..).

This usage can be used by both males and females.

However, “な” can also be used by male speakers to sound a little more “rough,” so it might not be appropriate to use in some cases.

**This type of “rough” usage of な as an ending particle is only used by men.

How is Naruhodo Used?

Naruhodo is often used in conversations between people of the same age, social status, or have close relationships with one another.

However, it can be changed to use it with your “superiors” as well.  We’ll list a few formal and polite expressions later on in this article.

**Note:  なるほどですね (Naruhodo desu ne) is a phrase that is used frequently, but it is technically a grammatical error. Naruhodo is an adverb, which makes it an independent, single word with no conjugation. Adverbs are mainly used to modify verbs and adjectives. Still, they are also used with Japanese honorific expressions such as “desu” and “masu,” which makes it grammatically incorrect.

Naruhodo is written as “成程” in Chinese characters (kanji).

程(hodo):  An expression for “magnitude” or the “degree” of something.

In other words, naruhodo means “to affirm that something has been done,” and that’s the most common way to use it now.

So when someone tells you new information that you casually want to acknowledge/agree with, saying “naruhodo” would work well.

Can You Use Naruhodo In Business Situations?

Some people may perceive the word naruhodo as slightly rough and may be seen as too casual.  Therefore, it would be best to avoid using naruhodo in business situations, especially with your business partners or bosses.

Here are three reasons naruhodo might not be suitable in formal/business situations.

1) It’s Not an Honorific Form

Since it is polite to show respect to your superiors, the casualness of naruhodo might be inappropriate in business situations.

There are other expressions which are more polite, so you should use these instead.  We list some of these expressions below.

2)  The Nuance of Appreciating What the Other Person Says

If your boss says, “This plan will raise profits by 150% this year.”

If you tell your boss “naruhodo” in a casual way, it would sound like you are judging and even disregarding your boss’s statement.

Naruhodo could also imply that you disagree with something someone said, in an almost passive-aggressive way.

If someone tells you, “Using this app is the best way to do this job.”  If you don’t agree with this, you can say naruhodo in a deflective way.  Naruhodo…

Other Ways of Saying of Naruhodo

“Kashikomaru” means to accept the words of your superior with a sense of abstinence. This phrase has a strong meaning of “accepting a superior’s order” and is used when you want to show a positive attitude to the person you are speaking to. It is appropriate to use in a business environment.  You will also hear it often in stores.  Since customers are “kings” in Japan, and polite service is essential, workers will often say “kashikomarimashita” to a  customer’s request.

It’s difficult to explain the nuance, but in English, it would sound something like this:

Customer:  Could I get another fork, please?

English: Absolutely. I will visit you tomorrow.

The word “ossharu” is an honorific form of “say.” It literally means “just as you said.”  You can use it in business situations to respectfully affirm the other person’s words by saying, “That’s right” and as an affirmation to your superiors. This is a term that is used a lot.

English: Just as you said. That’s what they want to do.

It means, “I received your message and learned” or “I accepted.” Suitable in conversation with a superior, such as your boss or your business partner.

English: I understand (acknowledge your request). I will send you a quote by tomorrow.

“Sayou” is another word for “exactly,” which affirms the speaker’s opinion or words. You use it to show understanding. Younger people don’t often use this phrase, but older people, in particular, use it as a dignified and polite response.

I hope this article help you understand “naruhodo” much better. Are there any other Japanese words you would like to learn?  Let us know!

I'm a freelance English/Japanese translator. I love history, culture, comics, and movies. Currently living in Japan, but plans to move to Germany next year.