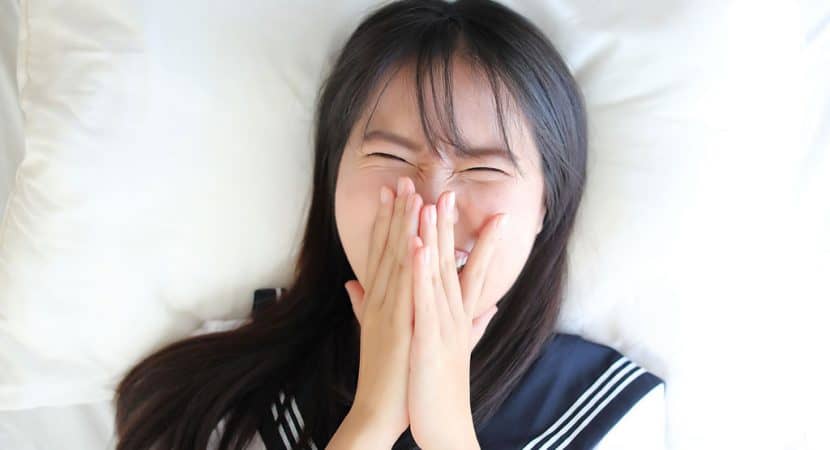 Manga has the power to take over our lives and show us unimaginable things. It takes us on guided tours of some of the weirdest and most wonderful, creative landscapes thought up by our favorite authors.

However, one thing we forget to look out for in manga is comedy. The comedy styles in manga can vary from subtle snickers to outright slapstick; what’s for sure is there are some absolutely fantastic comedy manga titles out there just waiting to be picked up!

With a unique art style, Angel Densetsu tells the story of fearsome Seiichirō Kitano. Legend has it he’s the best fighter at Hekikuu High, terrifying any student unlucky enough to cross his path…but legends can be deceiving.

The truth is, Seiichirō is a kind-hearted and sweet boy who’s greatly misunderstood. Despite his best efforts, all of his kind gestures and good deeds tend to go awry, and he can’t shake his roughneck reputation! From simple misunderstandings to hilarious disasters, every step our angelic student takes seems to go wrong and feed into his insidious reputation!

This comedy manga takes you through the trials of starting friendships and shedding old reputations. It relies heavily on the character-driven story, full of emotion; each new meeting comes with its own style of comedy. You’ll quickly discover you’re the first real friend Seiichirō has, and the struggles start from there!

If you can read Japanese, you can check out the first volume of this series on Amazon here: Angel Densetsu (Jump Comics) (1993) [Japanese Import]

Since its arrival on the manga scene, One Punch Man has been converted into a highly successful anime, but its paperback origins paved the way for its on-screen popularity.

Enter, Saitama, our impossibly powerful, egg-headed hero. After undergoing a training regime so rigorous that all of his hair fell out, he’s reached the pinnacle of human strength. Now bored of defeating all world-ending enemies in one punch, Saitama takes on an apprentice in the cyborg, Genos, who he agrees to train and show him how he acquired such power.

The comedy in this manga revolves around one simple joke, done very well, over and over again. In any other world, the enemies Saitama faces would be doomsday level, and yet they each get swiped away in one lazily thrown punch. We experience our protagonist’s frustration in failing to find a worthy challenge, one punch at a time!

Catch up with Saitama over at Amazon with One Punch Man Vol 1 here: One-Punch Man, Vol. 1

Or you can get a massive 15 volume set here: One Punch Man Volume 1-15 Collection 15 Books Set

Having recently had its own Netflix adaptation (and already taking over the meme world), The Way of The Househusband starts with a hilarious premise; Tatsu, a former Yakuza boss, retires to support his wife as a househusband extraordinaire.

Cooking, cleaning, and fighting for supermarket deals (literally), through Tatsu, we explore the would-be mundane world of everyday tasks with hints of his old lifestyle shining through.

There’s not much of a solid storyline here, but that doesn’t stop the hilarity and dry humor. It takes away those pesky final chapter cliff-hangers and endless waits for character closure.

The power of stay-at-home husbands is on full display in this reversal of the sexes, putting the power of the Yakuza into those boring household tasks!

Catch up with Tatsu with volume 1 of this series here on Amazon: The Way of the Househusband, Vol. 1

You can also buy a 4 volume set (volumes 1-4) here: The Way of the House Husband Series Vol 1-4 Collection 4 Books Set

A notable theme in comedy manga, SKET Dance takes us back to school once again, this time as a part of the SKET (Support, Kindness, Encouragement, Troubleshoot) Brigade!

Winner of the 2009 Shogakukan Manga Award for best shounen manga, the SKET Brigade takes us into the hallways of Kaimei High School and introduces us to unconventional students and teachers alike!

The team is composed of Yuusuke Fujisaki, Hime Onizuka, and Kazuyoshi Usui. We follow their trials of putting the world to rights by solving the various problems of students around campus.

When the calls for help dry up, our trio is forced to face their own trivial (albeit random!) trials, with each case and storyline helping our three grow. At times the arcs take a turn into a more touching and deep direction, letting us appreciate and emotionally connect with the team, with plenty of laughs along the way!

SKET Dance has its reputation as a spiritual successor to Gin Tama, with similarities between the trio dynamic and raucous misadventures. A well-earned accolade and proving itself a great fit for those with a Gin Tama-shaped hole on their reading lists!

You can pick up a copy of the Japanese version of this manga on Amazon: SKET DANCE Vol.1 (Jump Comics )[ In Japanese ]

After an attempted takeover of Fujou High, rebellious Kenji Kazama finds himself forced into joining the “Game Development Club,” with his participation necessary to prevent the club from being disbanded due to a lack of members.

Escape attempts ensue, but each one intertwines Kenji further into the club and gets himself wrapped up with their enemies and affairs. This manga takes on the structure of a slice-of-life style, exposing us to a traditional style of comedy as the manga reads on.

The manzai style humor used in D-Frag! involves two participants, a “straight man” and a “funny man,” opening the door to many situational jokes and laughs from the misinterpretation and forgetfulness of the other club members, with the straight man, Kenji, stepping in to set things right.

Before you know it, you’ll be having as much fun as Kenji is pretending he’s not, in this slapstick, slice-of-life manga.

Taking a stroll into the more surreal genre of manga (yes, even manga has its limits on “normal”), we have Beelzebub.

In this adventure, we follow Tatsumi Oga, a roughneck student of the infamous Ishiyama High. He’s tasked with raising the baby of Beelzebub III, the Great Demon.

Yes, we really did take that turn! Add in the fact that Tatsumi can’t go further than 15 meters away from the baby, resulting in death, and this delinquent is on a path of parenthood that he could never have anticipated!

Beelzebub blends action and dark comedy perfectly; at times, the story may lean heavily on fighting, with Tatsumi being powerful. However, there’s never a dull moment with gags following soon behind.

Each character has their own style of humor, and their comedy lands almost every time, meaning there’s always going to be something for everyone to love about Beelzebub!

Check out the first volume of Beelzebub (Japanese version) on Amazon here: BEELZEBUB Vol. 1 (In Japanese)

This is a down-to-earth, all-out comedy manga. Hinamatsuri shines a beacon of bright-eyed humor without the dark, scary corners of real life.

Every chapter brings more laughs and fun as we follow Nitta, a Yakuza gang-member, and a very unique young girl, Hina, and her supernatural powers. Most manga stories would explore the origins of the “why and how,” but Nitta sees opportunity through Hina, so his main focus is to use her; after all, psychic powers could always come in handy in the Yakuza business.

Hinamatsuri is the perfect example of a struggle we all know; personal problems being the be-all and end-all of your world (yes, above the actual world ending!). This manga is driven by the characters we love and grow with, each as likable and hilarious as the last. There isn’t a single frame we’d change!

This slice-of-life manga is exactly what it says. A defining time in any young boy’s life, the ups and downs of the gauntlet that is high school is one we all must experience.

We’re often formed by the friendships and relationships forged through high school; hobbies shared, time spent laughing and joking, and the whisperings of who you like and, god forbid, who might like you.

This manga cuts out the typical dull, everyday events and keeps up moving with hilarity that we can all relate to. We feel connected to the characters because we’ve all had these types of friends. We’re a part of this world because we’ve lived in it, and we laugh along because we’ve made these jokes!

A great time for all, check this manga out for a nostalgic trip back to your teenage years.

Keep up with the high school drama and pick up volume 1 over at Amazon here: The Daily Lives of High School Boys, volume 1

In Grand Blue (also known as Grand Blue Dreaming), we take a step further in life, from high school into college.

In this slice-of-life adventure, we explore more of a modern take, in terms of manga, of real life. We’re thrust into college life with our guide, 20-year-old Iori Kitahara, who’s just moved into an apartment above his uncle’s Diving Shop – Grand Blue.

This setting may be unique, but the lifestyle of the Diving Club members is one all college-goes know well. Drinking and partying, with minimal studying in-between, this manga relies heavily on classic, harmless fun, which is absolutely perfect to get lost in when you’ve had one of “those days.”

If you’re looking for a manga filled with misadventures, naked stunts, and frequent laughs, dive on in!

You can pick up volume 1 of Grand Blue over at Amazon here: Grand Blue Dreaming 1

Set in Edo after the invasion by the interstellar invaders, called the “Amanto,” a lone samurai won’t let his traditions die…even if the rest of the shogunate already has.

This manga follows Gintoki Sakata, a freelance extraordinaire, fulfilling various odd jobs and getting himself and his team into ridiculous situations.

The comedic style of this manga ranges from the traditional Japanese slapstick to intricate jokes woven through our very culture by use of the multitude of genres explored.

Gin Tama has an excellent balance of comedy, action, and drama, at times even blurring the lines of what you should be feeling. Striking laughter in one scene, then suddenly a hard-hitting drama in the next. This style helps with character development and understanding our team’s emotions and goals.

For a larger-than-life, out-of-this-world manga filled with fun and hijinks, Gin Tama is for you!

Start your adventure over at Amazon with volume 1 of Gin Tama here: Gin Tama, Volume 1

Now you’ve seen our 10 Best Comedy Manga let us know if you agree! Have we missed your favorite? A hidden gem, hilarious manga? Tell us more about your favorite comedy manga below in the comments!

Elliott was born and raised in the United Kingdom, getting his degree in Business Management and Marketing before jetting off to spend the next two years living in France. He had an early passion for film and television, with a certain penchant for what Eastern culture has to offer. From the classic movies of Akira Kurosawa and early Dragon Ball manga to the yearly seasonal anime that Japan has to offer. He may be living back on English soil, but it’s clear to see where he escapes to spend his free time!