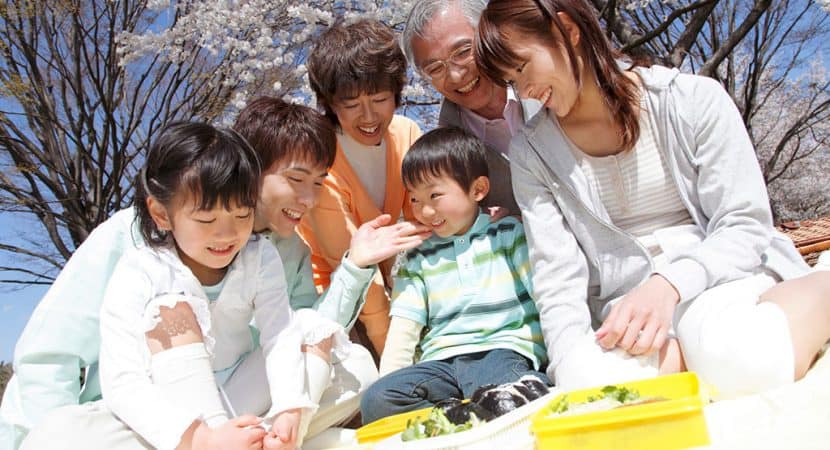 It’s no secret that Japan is a very family-oriented culture. Japanese strongly value bonding with their blood relatives, friends, neighbors, and colleagues. Common Japanese practices like going out for drinks with your boss and co-workers after work or cleaning the school with your classmates foster a similar close-knit family environment between peers.

Considering the concept of family in Japan is so extensive, it makes sense there would be a similarly vast amount of words to say family in the language. This article will cover the most common ways to say family and each family member in Japanese.

The most common way to say family in Japanese is 家族 (kazoku). This word is made up of the 家 (ie) kanji and the 族 (zoku) kanji. In Japanese, 家 (i.e.) means home, and 族 (zoku) means tribe or clan. Chances are you’ll see one or the other in many Japanese words related to family – many of which we will go over in this article!

2. 私の家族は５人です。
(Watashi no kazoku wa gonin desu.)
There are five members in my family.

家族は５人です。
(Kazoku wa go nin desu.)
There are five members in my family. (no possessive particle)

Talking About Someone Else’s Family in Japanese

Talking Directly to Someone About Their Family in Japanese

If you want to use 家族 (kazoku) to talk to someone about their own family, you can use a possessive pronoun, their name, or an honorific, depending on the situation.

For example, say you’re making small talk with your acquaintance Tanaka-san and want to ask him where his family lives. Your gut reaction may be to use the Japanese pronoun for you: あなた (anata). However, we want to actively avoid using あなた (anata) as much as possible when speaking in Japanese. It can come off a bit too blunt or even be seen as rude, especially when talking with someone you don’t know very well.

To get around this, we can replace あなた (anata) with the person’s name.

あなたの家族はどこの国にいますか？
(Anata no kazoku wa doko no kuni ni imasu ka?)
What country does your family reside in?

田中さんの家族はどこの国にいますか？
(Tanaka-san no kazoku wa doko no kuni ni imasu ka?)
What country does your family reside in, Tanaka?

Another option would be to use the honorific ご (go) in front of 家族 (kazoku). Like the honorific お (o), this is used to sound more polite when referring to another person we are not especially close with. It’s also a great way to avoid directly using あなた (anata) or the other person’s name!

ご家族はどこの国にいますか？
(Gokazoku wa doko no kuni ni imasu ka?)
What country does your family reside in?

There are a few other ways we can refer to another person’s family in Japanese, which we will cover more of them in detail later in the article.

Another common word for family in Japanese is 家庭 (katei). This word has the same 家 (ie) kanji from 家族 (kazoku) and the 庭 (niwa) kanji. 庭 (niwa) is used in many Japanese words relating to areas of land, such as parks and gardens. As you might be able to guess from the kanji combination alone, 家庭 (katei) generally refers to the overall family household whereas 家族 (kazoku) refers more specifically to the family members.

Let’s take a look at some sentences that better exemplify the difference in connotation between 家庭 (katei) and 家族 (kazoku).

うち (uchi) is a more informal way to say family in Japanese. Although its meaning and usage are similar to 家族 (kazoku) and 家庭 (katei), you will generally want to reserve using this term in casual conversations with people you are close with like friends and relatives.

1. うちは猫を飼っているの。
(Uchi wa neko o katteiru no.)
My family has a pet cat.

2. 今夜、うちに来ない？
(Konya, uchi ni konai?)
Want to come over to my place tonight?

When the 家 kanji is by itself, it’s read as “ie” – the Japanese word for home. When 家 is combined with other kanji, its reading changes to “ka” to form words like 家族 (kazoku) and 家庭 (katei) as we covered earlier. 家 also appears in many other Japanese words relating to home or family, such as the word for housework: 家事 (kaji), and the word for family lineage: 家系 (kakei).

When the 家 kanji is used as a suffix, its reading changes to “ke.” We can use the 家 (-ke) suffix to refer to other families by their surname.

Let’s look at some example sentences that also use the 家 (-ke) suffix.

In Japanese, 族 (zoku) means family, tribe, or clan. We can use the 族 (-zoku) kanji to refer to tribes and races of historical significance or prominent standing.

Below is a list of basic terms we use to refer to family members in Japanese. Words in the formal columns can refer to members of our family (when talking to them directly) or another person’s family. In contrast, terms in the casual columns are generally reserved for only referring to our family members (when speaking to someone outside of our family).

Speaking to Others About Your Family in Japanese:

Using words like お母さん (okāsan) or お父さん (otōsan) to talk about your mother and father with your boss would sound childish and even rude. This is like you are saying “my honorable mother and father” and putting them on a pedestal. That’s why when we talk to people we want to show respect to, we use the words 母 (haha) and 父 (chichi) instead.

If you would like to know more about speaking polite and respectful Japanese, check out our guide on keigo: honorific Japanese.

For a closer look at how we refer to our immediate family in Japanese, check out these articles!

Referring to our grandparents in Japanese is quite simple. We add the kanji for Ancestor: 祖 (so) as a prefix to the common words for parents.

Talking About Our Grandparents to Other People

To refer to our great-grandparents in Japanese, we simply add the kanji for Great: 曽 (sou) as a prefix to these words.

Talking About Our Great-Grandparents To Other People

As mentioned earlier in the article, we use formal honorifics such as お (o) and さん (-san) when speaking about someone else’s family members.

*Note: The more honorifics you use, the more polite you’ll sound in Japanese! While it’s common to talk about our family members in third-person without any formalities, you should use formalities like the さん (-san) honorific when speaking with them directly. This is especially true for older family members like our parents and grandparents, as it’s an important part of Japanese culture to speak with respect when addressing one’s elders.

Aunts, Uncles, and Cousins in Japanese

In Japanese, おばさん (oba-san) means aunt and おじさん (oji-san) means uncle. You can also refer to them in a more informal manner by simply lopping off the さん (-san) honorific, although it isn’t as common. Kanji are occasionally used to differentiate whether the aunt/uncle is older: 伯母 (oba) / 伯父 (oji) or younger 叔母 (oba) / 叔父 (oji) than one’s parent, but most of the time you will want to use these words in regular hiragana.

The word for cousin in Japanese is いとこ (itoko). Although you will generally see this word in regular hiragana, kanji are occasionally used to differentiate whether the cousin is a female or a male. This is done by adding the kanji for Secondary: 従 (Jū) as a prefix to the common words for sisters and brothers.

To refer to our in-laws in Japanese, we add the kanji for Honor: 義 (gi) as a prefix to the common words for parents and siblings.

**Note: The words using 義 in the chart above (義母 (gibo), 義父 (gifu), 義姉 (gishi), 義兄 (gikei), etc.) are not used for speaking.  They are more formal and are used mainly for writing.

We can use the above terms to refer to our in-laws in the third person. However, it’s important we use formalities like the お (o) and さん (-san) honorific when speaking with them directly. In Japanese, we commonly call our mother-in-law お義母さん (okā-san) and our father-in-law お義父さん (otō-san) as we do with our own parents.

Speaking to Your Mother-in-Law Directly Example:

お義母さん、今週末一緒に昼食を食べるのはどうですか？
(Okāsan, konshūmatsu issho ni chūshoku o taberu no wa dō desu ka?)
Would you like to have lunch with me this weekend?

If you’re a little overwhelmed by the various ways you can say family in Japanese, that’s okay! Going with the commonly-used 家族 (kazoku) will do the trick in most situations.

Remember to use honorifics when referring to another person’s family or when speaking directly to your own older family members.

How do you say family in your native language? Let us know in the comments below!

Interested in learning more? Take a look at some of our other Japanese language guides here!