Home
Useful Japanese Lessons
How to Say “Rice” in Japanese: Many Different Ways 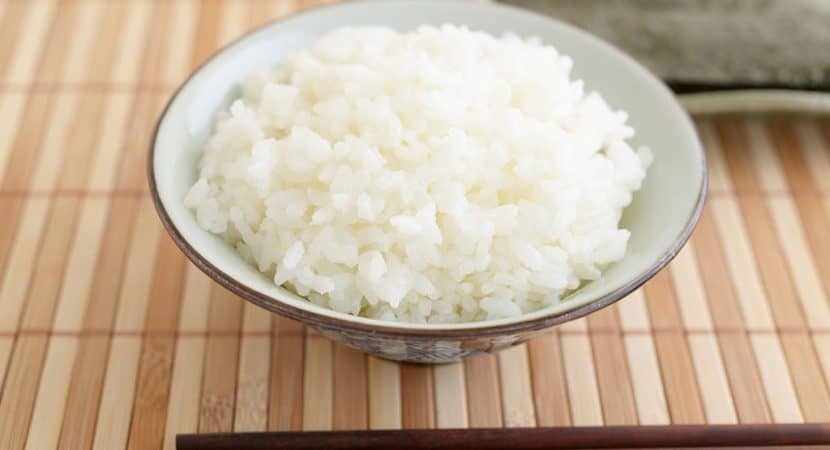 Rice is a food staple of Japan, and it is perhaps the most essential part of Japanese cuisine and food culture. Historically, Japanese people would eat rice with every meal – and many still do today. Rice plays such an integral role in the Japanese diet that many Japanese words for rice can also mean “meal!”

This article will show you the most common and useful ways to say rice in Japanese. Here’s a look at the list of terms we will cover in this article.

Words For Rice in Japanese

How to Say Cooked Rice

In Japanese, many words and phrases related to cooked rice will use the 飯 (meshi) kanji. You may recognize that 飯 (meshi) contains the character 食 (shoku) as a component, which is found in the common verb for “to eat”: 食べる (taberu).

We can use 飯 (meshi) by itself or pair it with the honorific prefix ご (go) to make the word ご飯 (gohan).

Both ご飯 (gohan) and 飯 (meshi) are the two most common words for cooked rice in Japanese.

Let’s go over these two words and their usages below.

The most common word for rice in Japanese is ご飯 (gohan). The word ご飯 (gohan) uses the honorific prefix ご (go) together with the 飯 (meshi) kanji. ご飯 (gohan) has two primary definitions: cooked rice and cooked meals.

We can generally use ご飯 (gohan) in a sentence to refer to cooked rice. However, you can pair it with other words to talk about cooked meals.

For example, combining the word for morning 朝 (asa) with ご飯 (gohan) creates 朝ご飯 (asagohan): the Japanese word for breakfast.

However, it’s important to remember ご飯 (gohan) is the most common word in Japanese for both rice and meals, so you’ll need to pay attention to the context of a sentence to know which definition the speaker is referring to.

Let’s take a look at some examples that use ご飯 (gohan) in a sentence below:

As shown in the examples above, ご飯 (gohan) can be written in three different ways. You will most often see the word written as ご飯 (gohan), which stylizes the honorific ご (go) in hiragana and the word 飯 (meshi) in kanji.

The word can also be written entirely in hiragana like this: ごはん (gohan). This stylization is usually used in very simple sentences about cooked rice.

You may occasionally see the word written entirely in kanji as 御飯 (gohan) as well. This stylization is not as common as the previous two but can be found in technical sentences or formal situations about cooked rice.

The word 飯 (meshi) is another common but less formal way to say cooked rice or cooked meals in Japanese.

For instance, if you are talking about having cooked rice for lunch to someone of a higher social standing, you would use ご飯 (gohan). Whereas if you are chatting with a close friend, you can use 飯 (meshi) instead.

How to Write 飯 (Meshi) in Japanese

As we can see from the sentence examples above, 飯 (meshi) can also be stylized in multiple ways.

In sentences about cooked rice, the word can be commonly written in either kanji as 飯 (meshi) or hiragana as めし (meshi).

Sometimes, you may find the word stylized in

katakana as メシ (meshi), but be warned! メシ (meshi) is generally used as a very informal and slang-type way to talk about meals or lunch. If you want to talk about cooked rice, it’s best to write this word in kanji or hiragana only.

How to Say Uncooked Rice

When referring to uncooked rice or rice grains in Japanese, we can use the 米 (kome) kanji. 米 (kome) can either be used by itself or paired with the honorific prefix お (o) to make the word お米 (okome).

Both 米 (kome) and お米 (okome) are the two most common words for uncooked rice in Japanese. Let’s go over them both below.

米 (kome) is the most common way to say uncooked rice or grains of rice in Japanese. This word is generally reserved for casual situations or instances where you refer to yourself.

Let’s look at a few sentence examples that use 米 (kome):

お米 (okome) is a more polite way to say uncooked rice in Japanese.

We can use it when speaking with someone of a higher social standing or in formal situations. お米 (okome) can also be used to talk about rice as a product or crop.

Below are some examples that use the word お米 (okome):

2. お米の炊き方を教えてくれませんか？
(Okome no takikata o oshiete kuremasen ka?)
Can you teach me how to cook rice?

3. その国では、お米の値段は結構高いよ。
(Sono kuni de wa, okome no nedan wa kekkō takai yo.)
The cost of rice is fairly high in that country.

The 米 (kome) kanji is one of the first characters taught in Japanese schools and is a basic component in many other kanji. Chances are you won’t see 米 (kome) or お米 (okome) stylized fully in katakana or rarely even in hiragana, so it may be a good idea to commit this kanji to memory.

Other Common Ways to Say Rice

Beyond the four main terms covered above, there are a few more words for rice you may come across in Japan. Let’s check them out.

玄米 (genmai) is a kanji compound that means brown rice in Japanese.

It combines the kanji for uncooked rice: 米 (kome) with the kanji for dark: 玄 (kuro). 玄米 (genmai) can be used to talk about both cooked and uncooked brown rice.

ライス (raisu) is katakana for the English word “rice” and is mainly used to talk about cooked rice or foreign dishes with rice in them.

You may commonly hear this word in the names of popular foods like curry rice: カレーライス (karē raisu) and omelet rice: オムライス (omuraisu). Both meals are now beloved parts of Japanese cuisine, yet their origins come from countries outside Japan. This is why the loan word for rice: ライス (raisu) is used instead of ご飯 (gohan).

新米 (shinmai) means the first rice crop or harvest of the year in Japanese, and it is also used as an expression for a novice or a beginner.

The word is often used in situations referring to a new employee and can even have the negative connotation of calling someone a “newbie” in specific contexts.

Let’s take a look at sentence examples that use these terms:

Below are a few more common terms and kanji compounds you may see in situations related to rice in Japanese. Try using them to create sentences of your own!

Other Words Related to Rice in Japanese

Let’s go over the four basic terms we can use to say rice in Japanese:

These four words can be used in any context to talk about rice. Just remember to use their respective polite and casual forms in the correct situations. And once you’ve got those down, try practicing how to use some of the other words for rice we covered in the article!

Hungry for more? Check out our other Japanese language guides here!