Home
Useful Japanese Lessons
Shinto: A Look Into the Religion of Japan 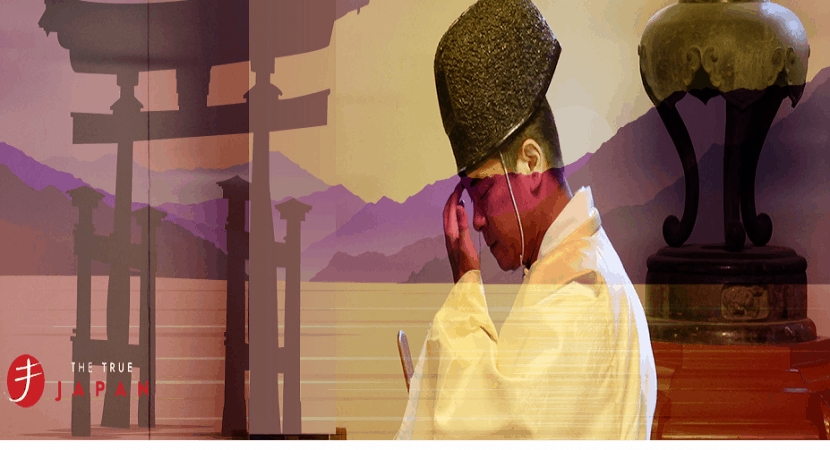 Shinto, which means “the way of the Gods” or “Kami” (spirits), as they are referred to, is the oldest religion of the Japanese indigenous people. Shintoism dates back to around the sixth century B.C.E.

Despite this lengthy history, Shinto is commonly understood to have become popular around the sixth century C.E. to distinguish between Buddhism, which arrived in Japan by way of India.

Shinto is a religion but unlike others, it has no known founder nor are there any sacred texts or formalized teachings. The foundation of Shintoism is a belief in Kami: the spiritual elements of nature that exist in waterways, trees, mountains, and geographical regions.

Kami also live within tangible and non-tangible forces of nature, sacred beings, animals, and can also be spirits of the dead.

This helpful video sets out how this non-religious religion operates in society.

The Main Beliefs in Shintoism

Shinto encompasses all faiths. It is not really a religion per se, because there are no sacred religious texts or a founder. It is a way of being that is a spiritual communion between humanity and nature in the world.

Shinto can be practiced side-by-side with all religions and most Buddhists in Japan also refer to themselves as Shinto followers. The main philosophy is that the spiritual aspect embodies earth elements, food, the deceased, and many other facets of existence.

In Shintoism, even diseases possess positive and negative traits or good and evil characteristics. The goal of Shinto is harmony and respect for humans and nature alike.

The Japanese word for god, deity, divinity or spirit is Kami.  Kami are the holy forces, spirits, or phenomena that personify the Shinto religion.

The ancient spirituality of the Japanese people is the foundation of modernized Shinto. It was formalized as a spiritual institution to protect it from the other religions brought to Japan, most notably Buddhism, Confucianism, and Christianity.

Kami encompasses many aspects, let’s break them down to understand them better. Since Kami as a whole is the spiritual aspect of many concepts, objects, nature, natural forces, and deceased people it’s helpful to understand that in Shintoism, just about everything is thought to have a spiritual nature.

Forces of nature such as wind, thunder, and hurricanes; natural elements like the sun, grass, rivers, mountains, rocks, trees, waterfalls; and qualities like fertility, growth, and the production of food are all Kami.

Shinto practitioners also believe there are spirits designated to be guardians of the land; spirits of skills and occupations; spirits of men who have achieved greatness by way of exceptional deeds or who were instrumental to civilization; and spirits of those who died for a noble cause within their nation or community.

All of these aspects are considered kami and Shinto prays to these spirits and gods as a form of worship.

As stated before, while there are no official religious texts or known founders of Shinto, the myths were recorded in Kojiki (Records of Ancient Matters) in 712 C.E., and later in 720 C.E. in the Nihon Shoki (Chronicles of Japan).

According to ancient traditions, there were five traits of Kami:

The Three Main Branches of Kami:

There are three main forms of Kami:

As the Kami are ever-changing, these classifications aren’t written in stone but used as a guide to differentiating between them.

For an insightful philosophical discussion of Shintoism, this video is excellent:

The Principles of Shintoism

Purification by the washing of hands and mouths at Shinto shrines

The belief that life is sacred because Kami created human life is one of the main tenets of Shinto. The only way to arrive at divine nature is through purification and the way to purification is by practicing the four affirmations of Shintoism:

Kami are the spirits who allow blessings to be bestowed upon people or, from the dark side, curses as well.

Shinto followers are supposed to practice the four affirmations every day and wear omamori to protect them from evil kami. Omamori are charms worn to keep evil Kami from affecting you and to help ward off sickness or disasters of any kind.

The Kami are respected and worshipped throughout the Shinto religion. The main goal in life for Shinto believers is to acquire magokoro (a pure, kind and sincere heart) which is only obtained through Kami. Shinto worshippers are taught to respect the living and non-living entities because they possess a deeply divine spirit.

Like in many Asian religions, household shrines are commonplace. Kami are worshipped at home, at family Shinto shrines, and at public shrines. The public shrines are run by priests who oversee offerings to the Kami and the sale of religious paraphernalia to visitors of the shrine.

The kagura is also a big part of Shinto rituals. This ceremonial dance has its origins in the folktale told in the Kojiki and Nihon Shoki. The sun goddess Amaterasu brought cold and darkness to the world by hibernating in a cave. In order to coax her from the cave, the goddess of dawn, Ame-no-Uzume, led the other gods in a dance of wild abandon.

This dance caused such a commotion that Amaterasu had to exit the cave to see what was happening. Kagura is one of the many rituals and arts that are said to have transpired from this event.

Originally called kamkura or kamikura, the sacred Kagura dances were mostly performed at the Imperial Court by sacred ladies of the shrine, thought to be descendants of Ame-no-Uzume.

Eventually, these dances made their way to villages around the country and new dances were created called miko kagura, shishi kagura, and Ise and Izumo style kagura dances.

The popular Noh theatre, which involves storytelling and the acting out fables, takes most of its influence from kagura.

In addition to the dances, there are age-specific celebrations and festivals for every season. Matsuri is the collective term used to describe these rituals.

Lastly, in order to ensure purity, there are various forms of ritual washing and bathing. Shinto does not have specific moral codes of conduct other than ritual purity, respect for Kami, and seasonal communion.

Check out this informative video on kagura dances:

There are no weekly religious services in Shinto. People are allowed to visit shrines when it’s convenient for them. Some choose to go on the first and fifteenth of every month and when festivals and celebrations occur. Devoted followers often pay their respects to the shrine on a daily basis.

Shinto is primarily practiced in Japan. There are 113 million followers and about 80,000 public shrines, according to the country’s shrine organization.

Shinto is practiced elsewhere but in much smaller numbers. Japanese people, in general, consider themselves secular. But most of the population participates in Shinto and Buddhist activities, most notably the festivals and seasonal events. Japanese people are very inclusive in regards to culture and religion and welcome every faith.

Shinto shrines are built to honor and worship individual Kami. Shrines can be palatial and ornate or very simple but all shrines share common elements. Let’s take a look at some of the most important Shinto shrines in Japan today.

Built in honor of the main sun goddess, Amaterasu, this shrine is considered one of the most sacred spaces in all of Japan. On the grounds, there are 125 individual shrines and the site draws more than six million visitors yearly. This shrine is also where the infamous Sacred Mirror resides.

Located in Hiroshima Bay, the most poignant aspect of this shrine is the stunningly beautiful “floating Torri gate.” Itsukushima Shrine is also a UNESCO world heritage site.

This famous Shinto shrine is 100 years old and is dedicated to the Kami of Emperor Meiji of the Meiji restoration period when Japan became an imperial power.

Contrary to popular belief, Meiji is not buried at the shrine. Shinto believes that shrines are sacred and pure, and bodies should not be buried in close proximity to any shrine, but there are exceptions.

Although there is no concrete evidence that reveals the actual construction date of construction of this famous shrine, it is considered the oldest shrine in Japan. This building was built to honor the Kami of Okuninushi. He was the creator of the Japanese land, and later in time, also became known as the Kami of marriage.

The Toshogu Shrine is a UNESCO World Heritage site. This Shinto shrine is unique because it houses the remains of Tokugawa Ieyasu, the first shogun (military ruler) of Tokugawa, Japan.

There is no definitive answer to how many festivals take place each year in Japan, but current figures suggest 200 to 300 thousand per year. Festivals are called Matsuri, and the biggest and most famous festival takes place in July in Kyoto.

Gion Matsuri runs for the whole month of July and is highlighted by Yamaboko Junko, the grand finale of floats on July 17th and 24th.

The basis of the Shinto religion is respect and honor for nature and all things natural.  As this religion has no formal texts and founders, the substance of the teachings has been passed down through Japanese culture. It is the religion of indigenous Japanese people.

The beauty of Shinto is that peace and harmony are revered among all energies of life and death and being in nature means being close to the Kami, the gods. The way to the gods with Shinto is by upholding family values, loving and honoring nature, physical cleanliness, and regular worship.