Home
Useful Japanese Lessons
How to Use the さ (Sa) Particle in Japanese: A Complete Guide 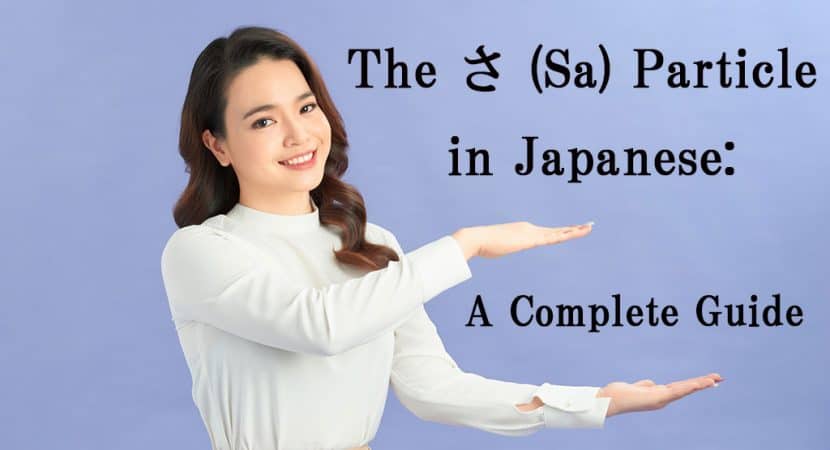 Understanding particles are essential for becoming good at Japanese. Each particle has its own connotation and grammatical function. The さ (sa) particle has two primary uses: to add inflection and emphasis to a sentence and to modify adjectives into nouns. This article will go over both of these functions and how to use さ (sa) in detail.

In contrast, particles like よ (yo), ね (ne), だ (da), and さ (sa) are used at the beginning, middle, or end of sentences to change their inflection and tone.

Much like the よ (yo) and ね (ne) particles, we can use さ (sa) in sentences to assert or to emphasize an idea or sentiment.

Beginning a Sentence with さ (Sa)

さ (sa) can be used as a sentence opener to bring attention to an idea or sentiment. When used at the beginning of a sentence or statement, the particle さ (sa) can mean anything from “hey, come, come now, go on, well, well then, and let’s see.” It can be like the “hey” in “Hey, what was the name of that restaurant again?” Or it can be like the “well” in the sentence, “Well…let me think about that.”

Like these words in English, we generally want to use さ (sa) at the beginning of emotional or exclamatory sentences in casual situations with people we are close to or of the same social standing. Let’s look at how to use さ (sa) naturally with some examples.

As shown in the sentence examples above, さ (sa) can also be stylized as さあ (sā), さぁ (sā), and even さー (sā). These different spellings elongate the pronunciation of さ (sa) and emphasize its meaning even more in sentences.

The written forms of さあ (sā) and さぁ (sā) are commonly used at the beginning and end of sentences while さー (sā) is often used in very casual conversation and slang talk. However, they are all pronounced the same when speaking. Using any of these spellings over the regular さ (sa) will help give more flair and personality to your Japanese sentences; just remember to avoid using them in most formal situations!

A good example of the nuance of this is with the phrase, “あのさ (ano sa),” which is a common way to get someone’s attention. It’s similar to “Hey” or “About that….” in English.

With あのさ (ano sa), the meaning would be something like, “Hey.”

Using さ (Sa) Within in a Sentence

さ (sa) is also used to bridge together sentences with multiple clauses and make them sound more natural. In these instances, the particle さ (sa) is generally placed after a clause or conjunction.

1. 今夜のパーティーに行きたいけどさ、勉強しなきゃ。
(Konya no party ni ikitai kedo sa, benkyō shinakya.)
(Ohhh…) I want to go to the party tonight, but I have to study.

When you use さ (sa) in this way, it makes the sentence more casual. It also slightly changes the nuance of the sentence. Let’s look at what would happen if we took out the さ (sa) from the first example:

This is just a statement that says, “I want to go to the party tonight, but I have to study.”

With the さ (sa) particle, the nuance changes:

Using the さ (sa) particle acts to express your emotion in casual conversations.

Ending a Sentence with さ (Sa)

Moreover, the particle さ (sa) can be used at the end of sentences to reinforce an idea or sentiment and add inflection or charisma to a statement.

1. 着飾らなくていいよ、どうせ正式なイベントじゃないさ。
(Kikazaranakute ii yo, seishiki na event janai sa.)
You don’t have to dress up. It’s not a formal event anyway (y’know?).

What’s the Difference Between さ (Sa) and Other Particles?

さ (sa) works similarly in function to よ (yo) and ね (ne), but what exactly is the difference between these three particles? While they may seem interchangeable at a glance, each one possesses its own subtle connotation.

As we can see from the chart above, よ (yo) works much like an exclamation mark and introduces new information to the listener. ね (ne) carries a more interrogative tone, almost as if you are asking for confirmation (I’m going out for a walk, okay?). さ (sa), on the other hand, invokes assertion and insistence.

Another point to keep in mind is よ (yo) and ね (ne) are also commonly used in formal situations, while さ (sa) is usually reserved for casual situations. さ (sa) can also have a bit of a youthful charm to it, as boys and young men may prefer to use さ (sa) in casual conversation with buddies while girls may elect to use the more tonally neutral よ (yo) and ね (ne). That being said, it is very common for women to use さ (sa) as well, especially when talking to their close friends or family.

These subtleties are important to keep in mind when differentiating between Japanese particles.

Using さ (Sa) with Other Particles

さ (sa) can also be combined with other common particles like ね (ne), な (na), and て (te) to convey different meanings.

Let’s take a look at some sentences that use these particle combinations:

The second primary function of the さ (sa) particle is nominalization. Much like the “-ness” suffix in English, さ (sa) can be placed at the end of adjectives to modify them into nouns. For example, you can use it to turn adjectives like 辛い (karai – spicy) into nouns like 辛さ (karasa): spiciness.

I-adjectives are adjectives preceded by い (i) when modifying a noun or pronoun in a sentence. We can convert i-adjectives into nouns by replacing the last い (i) with the さ (sa) particle.

Below are some examples where the さ (sa) particle is used to nominalize adjectives:

2. 一番好きな色はシアン、色の鮮やかさが綺麗だと思うから。
(Ichiban suki na iro wa shian, iro no azayaka sa ga kirei da to omou kara.)
My favorite color is cyan because I think the vividness of the color is pretty.

3. この机の長さは短すぎですよ。
(Kono tsukue no naga sa wa mijika sugi desu yo.)
This desk’s length is much too short.

It may seem a bit overwhelming keeping track of the さ (sa) particle’s various uses and functions at first, but don’t be discouraged! さ (sa) is commonplace in Japanese conversation; you will get used to hearing it in TV, movies, or face-to-face chats and become well-acquainted with its varied nuances in time.

Interested in learning more? Be sure to check out our other Japanese language guides!