Home
Useful Japanese Lessons
What Does Sugoi Mean in Japanese? 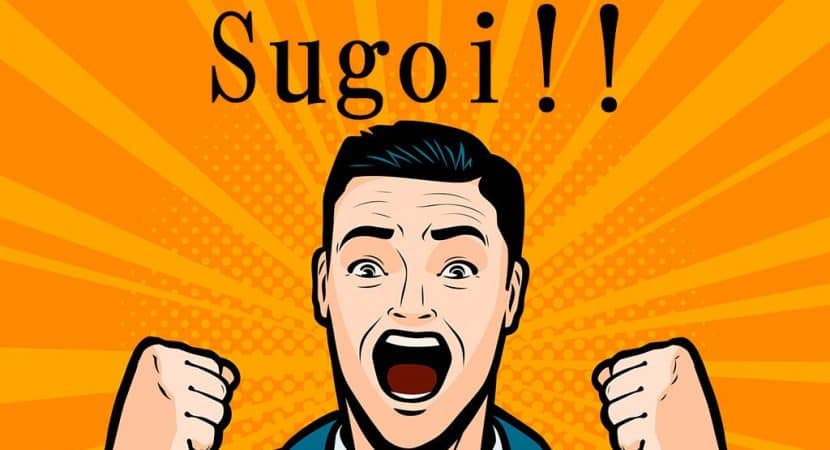 The word すごい (sugoi) is very popular, even among people who don’t know a lot of Japanese.  Sugoi has two major definitions: amazing and terrible. That’s pretty sugoi itself, right?

Not only does sugoi have two very different meanings, but it’s also quite flexible within a sentence. Sugoi can be an adverb, adjective, or just an exclamation of delight. You can use it with your friends and your boss! Pretty cool, right? Let’s take a more in-depth look at the meaning of すごい and the many scenarios you can use it in.

When and How to Say Sugoi

Here are the major scenarios and ways in which you would find yourself wanting to say sugoi!

Sugoi as an Exclamation

The most familiar use of すごい to non-native speakers would be the shout of amazement or joy: すごいね！

Kimi: Great! When do you start?「すごいね！いつから始まるの？」  (Sugoi ne! Itsu kara hajimaru no?)

As you can see, sugoi will either stand on its own as an exclamation or fit smoothly into a sentence structure to express amazement.

One of these sentences has an alternative pronunciation “すげえ” (sugee). Bear in mind that this is an extremely casual way of saying sugoi and some Japanese people might find it rude. Unfortunately, this is more of a problem if a girl says sugee; it’s considered a pretty masculine use of sugoi.

Sugoi as an Adjective

You can use sugoi to compliment (or insult) a person, place, or thing. Sugoi can still definitely hold a negative and even sarcastic connotation, depending on your tone and the situation.

3. Is it even possible to get a zero on this easy test? You must be incredibly dumb.  「こんなに簡単なテストにゼロ点取るなんて、すごいバカだと思う。」 (Konna ni kantan na tesuto ni zero ten o toru nante, sugoi baka da to omou.)

Sugoi as an Adverb

Sugoi is often used to emphasize verbs in a sentence. This can be either a positive emphasis or a negative emphasis. When you use sugoi as an adverb, remove the “い” (i) and replace it with “く” (ku). すごい→すごく。

Many Japanese people make the colloquial mistake of leaving out the く(ku) in sugoku when they use it this way as an adverb. Technically, this is a grammatical error. Check out more on how not to say sugoi and sugoku at Japanese Ammo.

Sugoi is more of a casual phrase than something you would say to your boss, but it isn’t entirely out of place in business conversations. After all, amazing (or terrible) things happen in the workplace, too.

When you’re in the company of superiors or peers, be sure to add です (desu) or ます (masu) at the end of your sentences. This will ensure that your tone is 丁寧 (ていねい、teinei) or polite. For more on polite and formal Japanese, check out our article on the topic!

The History of Sugoi

The commonly held belief is that the original nuance of すごい was a negative one. This is because the radicals in 凄い (sugoi) are more negative than positive. Specifically, the leftmost radical 冫 (hyou) means “water, ice, cold” and is often used to depict a cold shoulder/attitude or a chilling event. For an even more detailed look at 凄い and its radicals, check out Bond Lingo’s take on the kanji.

These days, すごい is often written in hiragana, and people tend to use it positively. Young people especially will use the word when something awesome or surprising happens. Adults and even business workers will use the adverbial conjugation (すごく – sugoku) to emphasize something they enjoyed—or disliked. No matter what shape it takes, すごいis rampant in 21st century Japanese.

The word sugoi is pretty impressive, right? You can use it in a ton of different situations, and it works in both polite and casual conversations.

What’s something you discovered recently that you thought was すごい？Let us know in the comment! Thank you for reading this article. You are also sugoi!