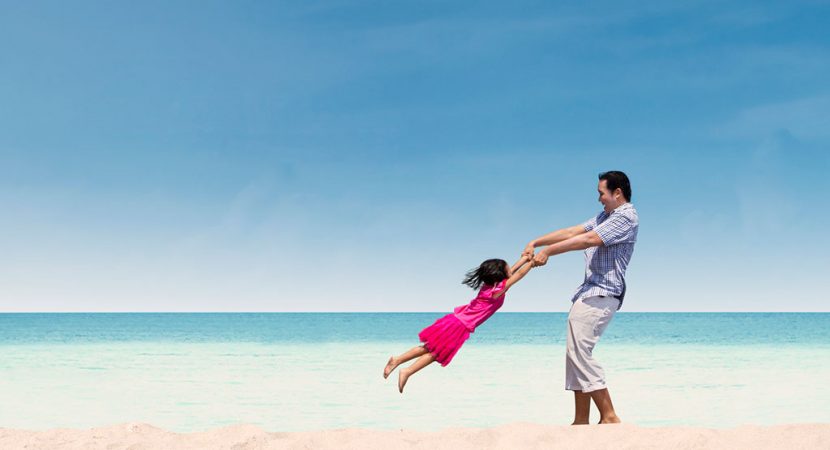 In a previous article, we discussed the various terms for mother in Japanese and when to use them. The same rules apply here: depending on whose father you’re speaking about and the social situation you’re in, the word will be different. Once you start learning Japanese, knowing the right word to use will become easy. Let’s look at how to say father in Japanese.

父 (chichi) is a general term for father in Japanese. You only use chichi to refer to your own father when talking to other people.

It’s important to remember that chichi is more of a term, not a title. It wouldn’t be polite to speak to your father and call him chichi.  You use it when you talk to other people about your father.

You can use it when you talk about someone else’s father.  Many Japanese people also call their own dad otousan.  You can even call your spouse’s father otousan since you are married into their family.

Adults also use the word when they are speaking to younger children about their fathers. A teacher might even say otousan when speaking directly to the father of one of their students.

Depending on the social situation, the suffix -さん (-san) may be replaced with -様 (sama) for a more formal nuance. This would hold the same meaning as “father,” whereas otousan might be more like “dad.”

Otousama is very polite and formal, so you’ll often hear it said by staff (in a store, school, etc.).  You’ll never hear people refer to their own father as otousama in this modern era.

On the other side of the spectrum, adding the suffix -ちゃん (-chan) creates the Japanese equivalent of “daddy.”However, otouchan is an incredibly popular title these days, especially among younger children.

The word 父親（chichi-oya）is a general term for father in Japanese. Chichi-oya is even less personal in its nuance than chichi and is used when speaking about all fathers in general.

If you use it to directly refer to someone’s father, (as in, “how is your father?” or “I saw your father today.”), it will come off as cold and even impolite.  Calling your father chichi-oya would also be unnatural or cold, so be careful about when you use this term.

It’s often used to refer to fathers in general (example #1 and #2 below). It can also be used to talk about your father in an impersonal way (example #3).

3. 私には父親の違う妹がいます。
(Watashi niwa chichi oya no chigau imouto ga imasu.)
I have a younger sister with a different father.

When used to refer to father in Japanese, the word 親父 (oyaji) should be restricted to casual conversation. Oyaji has a warmer, more personal nuance to it than chichi-oya or chichi, but is very informal.. The English equivalent would be something like “my old man.”

You can use oyaji when talking about your dad to someone else (example #1 below).  Some people call their own dad oyaji (examples #2 and #3).

Oyaji can also be used to refer to an older man past his 50s (example #4 below).

The term oyaji tends to have a rugged, masculine sense when it’s used. Men use oyaji more than women, as Japanese is still a fairly gendered language.

Adding “-san” to form the word  親父さん (oyajisan) can possibly be used to refer to your boss if you are in a “master & disciple” type of relationship.  For example, some people who are learning techniques and skills from a sushi chef or craftsman might call their master oyajisan.

One fun fact about this term is that the Japanese use it in their word for dad jokes: 親父ギャグ（oyaji gyagu）, or “old man gag!”

1. うちの親父は変わっている人だよ！
(Uchi no oya-ji wa kawatteiru hito da yo!)
My old man is a weirdo!

2. ラーメン作るけど、親父も食べる？
(Ramen tsukuru kedo oyaji mo taberu?)
I’m going to make some ramen.  Would you like some, dad?

4. あそこの親父は誰？
(Asoko no oyaji wa dare?)
Who is that old guy over there?

It might be surprising to hear Japanese children use an English word like papa, but this borrowed term for father is used in Japan all the time. パパ(papa) is similar in Japanese to daddy.

The majority of people who use it are young children—or perhaps their parents. Like otou-chan, the word papa is considered “cute” and casual. Even young children, who are taught the formality of their language and culture from a very young age, might not use papa in polite company.

The word おとん (oton) is technically 関西弁 (Kansai-ben), or Japan’s dialect in the Kansai region. This gives the word a very casual and fun-loving feel. It’s not the right word for father if you’re in polite or formal company, but oton is great for friends and family.

Kansai-ben is a big part of Japan’s pop culture, as most comedians are from Osaka and have a heavy dialect. If you use oton correctly, you’ll be a big hit and make plenty of people smile.

義理のお父さん (giri no otou-san) is the proper term for the father of your spouse. While many people go on to refer to their fathers-in-law as otousan or other less formal terms, giri no otousan will typically be the go-to for polite company.

Like chichi, giri no otousan is a word to use when speaking about your father-in-law. When speaking to him, use otousan. If you feel like your relationship isn’t that close yet, it’s perfectly acceptable to refer to your father-in-law by his name. Be sure to add the suffix -san to that as well!

1. 義理のお父さんは 弁護士です。
(Giri no otou-san wa bengoshi desu.)
My father-in-law is a lawyer.

父上 (chichi-ue) is an old-fashioned word that was used by samurai and noble families. However, you’ll often come across the term in Japanese literature or media. It is rarely, if ever, used in everyday conversation.

You might use chichi-ue if you’re messing around and want to sound dramatic or old-fashioned (example below).

尊父 (sonpu) is honorific Japanese. It means “your father” and often has the prefix 御 (go-) preceding it for extra formality.

Sonpu is rarely used outside of written Japanese. You’ll often find it in condolence letters or other formal addresses for special occasions.

Chichi-gimi is honorific Japanese or 尊敬語（sonkeigo）. It should only be used to refer to other people’s fathers. If you use chichi-gimi to refer to your father, it will seem as though you are honoring yourself.

However, this is a word that almost no one uses in daily conversation.  You’ll probably never run into a situation where you’ll have to use this word too. The words chichi, otousan, and otousama (explained above) will fit almost all of the situations you find yourself in.

There are many ways to say father in Japanese. Choosing the right word will depend on whether you’re speaking to your father or talking about someone else’s.

Of course, the formality of the situation you are in and the people you are talking to should also be considered. Take these into consideration, and you’ll be able to say father in Japanese like a native!

How do you say father in your language? Let us know in the comments! Thank you for reading this article on how to say father in Japanese.