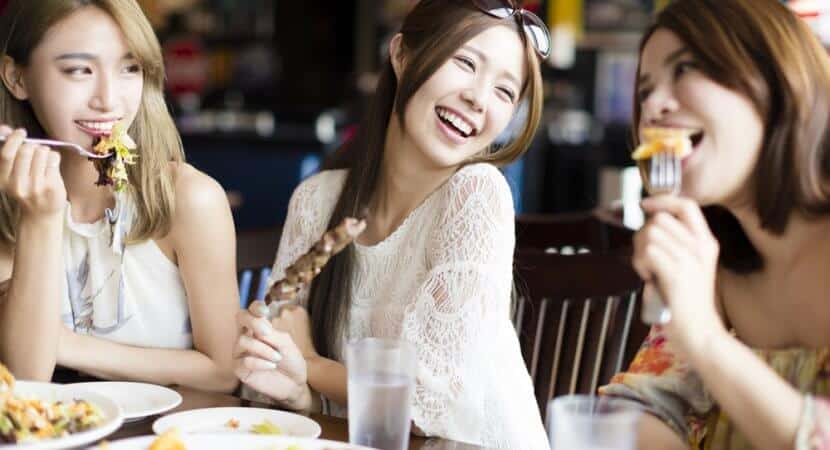 When you’re learning to speak Japanese, it can sometimes feel like you’re learning more than just one language.  That’s because you use different words and grammar depending on who you’re talking to. It’s expected that you acknowledge a person’s social status in the language that you use.

If you’re going to interact with Japanese people in a formal setting, you’ll need to learn how to speak with varying levels of formality and politeness. If you don’t, you risk sounding disrespectful and ignorant.

But, if you’re just kickin’ it with some friends at an izakaya, or hanging out at your best friend’s house and binge-watching TV shows, there’s a whole other language you need to know – one that is way more fun to learn.

So if you don’t want to sound stiff and weirdly formal when things are casual, check out this list of the 20 coolest Japanese slang words being used right now and try adding them to your vocabulary.

This word might be the most frequently used slang by young Japanese people right now. Like a lot of Japanese words, the meaning of やばい (yabai) changes quite drastically depending on the context. If you hear an older person using the word, they’re probably referring to the more traditional definition, which is “dangerous, risky, or shady.”

But for the younger generation, やばい usually means either “awesome, amazing, cool” or “terrible, crappy, awful.” It works for both extremes, making やばい a popular choice for describing anything from a favorite movie to a terrible first date.

Used in response to something funny or interesting, ウケる (ukeru) means “That’s hilarious!” or “I dig it.” Next time someone tells you a joke or shares a funny thing that happened to them, try responding with “ウケる!” And if someone responds to you that way, you’ll know that you’ve said something pretty hilarious.

This word, meaning “very” or “super” is very commonly used.

For example, you might say “この服めっちゃ可愛い！” (Kono fuku meccha kawaii!) which means, “These clothes are super cute!”

Just like in the English language, it’s used in response to something surprising or unbelievable.

If someone says this to you after listening to your story, you can reply with “マジ (maji)” which means “I’m serious” or “yeah, seriously.”

マジで can also be used to describe something, like “あの人マジで強い” (Ano hito majide tsuyoi) which means, “That person is seriously strong.”

This word derives from the English word “grotesque” and has a similar meaning. It can also mean “gross” or “creepy,” when used to describe something like a horror movie.

A shortened version of the word 気持ち悪い (kimochi warui), which directly translates to “bad feeling,” キモい means “gross, disgusting, creepy” and can be used to describe anything from food to bugs to people. Often it’s shortened even more to キモっ (kimo). It’s your go-to phrase when you encounter something gross.

Meaning “annoying,” as in, “あの人うざい” (Ano hito uzai) which means “that person is annoying”. Again, this word can be shortened even more to うざっ(uza).

This slang comes from the word めんどくさい (mendokusai), and it means something along the lines of “I can’t be bothered,” “I’m too tired to deal with it,” or “It’s too much of a hassle.”
People can also be described as めんどい, when they are kind of difficult or annoying to deal with.

テキトー (tekitō) can mean “sloppy, half-assed, careless, irresponsible, flaky, unreliable.” It can mean someone is “cutting corners” when doing something, or “winging it” instead of taking the time to do it properly. For example, if someone is baking a cake and they are being very テキトー about it, it means they’re not measuring ingredients very precisely or following the recipe very closely. They’re sort of sloppily putting it together, without caring much about how it turns out.

A word that has several different meanings, ビミョウ (bimyō) is most often used to mean “vague, iffy, unclear” or “to have mixed feelings about” in modern Japanese. For example, if you went to see a movie with your friend and she asked you if you liked it but you weren’t really sure you did, you could say, “うーん、微妙。。。” Sometimes it’s used when someone means “no” but doesn’t want to be too direct and hurt someone’s feelings. It’s not a hard no, but it’s definitely not a yes, either. It falls somewhere in between.

This word comes from the word 半端じゃない (hanpa ja nai).  半端 (hanpa) means “incomplete,” and じゃない (janai) means “not,” so the term 半端ない (hanpa nai), which is a slightly shortened version of 半端じゃない, literally means “not incomplete.” When used in everyday language, it’s usually to describe something that’s “overwhelming” in a good way, or “awesome” or “unbelievable.” There are many ways to describe this word, because it all depends on the context.

Basically, something is 半端ない when it goes above and beyond average.

Meaning “tired, heavy, sluggish, slow, or dull,” だるい (darui) is a feeling you get when you’re totally worn out. In some cases, だるい means you’re feeling unwell or sick.

It takes the first letter of each word (an interesting mix of Japanese and English!) to describe a person who is not able to “read the atmosphere” of the room.

It usually describes someone who is socially awkward, and says the wrong thing at the wrong time, or is insensitive to his/her surroundings.

For example, if a group of friends are talking about a recent death in someone’s family, and one person tears open a bag of chips and starts chomping on them loudly, that person would be described as being “KY.” It’s not the time and place to be eating chips when someone is grieving.

Often used to describe professional sports players, 神ってる (kamitteru) roughly translates to “godly” and describes someone who does something so amazingly well that it seems “out of this world.”

This phrase became popular when the manager of the professional baseball team, the Hiroshima Toyo Carps, used this phrase to describe one of his players hitting a game ending homerun 2 nights in a row.

おつ (otsu) is a very shortened version of the term お疲れ様 (otsukaresama) which is a phrase that is very frequently used in the workplace.

It means something along the lines of “great job,” “you worked hard,” and “thanks for your hard work.”

It’s one of those Japanese phrases that has no exact translation.

You can say it to your colleagues after a long day of work, or to a friend who has just completed a half-marathon.

You can basically say it to someone anytime they might be tired from the hard work they’ve done – the word お疲れ literally means “tired.”

For the slang version, only the first two characters are used, making it super short and casual. It’s often expressed online in the form of the kanji, “乙.”

Taking the words おしゃれ (oshare) and かわいい (kawaii) and fusing them together, this word means “stylish and cute.”

Created to save time when typing these words online, it’s typically used by the younger generations.

There are dozens of fused-together words like this, and more are being created every day on the Internet.

This word comes from the term “party people” and describes people who go out to clubs and bars frequently and party harder than the average person.

This word is the equivalent of saying “to Google” something.

This term was developed in the Twittersphere as a way of describing what you’re doing right now. If someone tweets “東京タワーなう(Tokyō Tawā nau)”, it means they’re at the Tokyo Tower right this minute.

Another Internet slang, リア充 (ria jū) is the fusion of the English phrase “real life” and 充 (jū) which means “fulfilled” or “enjoying to the fullest.” It describes someone who’s offline (real) life is very fulfilling and rewarding, not just their online presence, which can easily be faked.

Japanese slang is fun to learn, and even more fun to use. It’s such a huge contrast to the stiff nature of formal Japanese.  However, if you want to learn how to speak Japanese both casually and formally, I highly recommend you check out Japanesepod101.  Their lessons are awesome.

Next time you’re having drinks with some good friends, you’ll know what everybody is saying, and hopefully you’ll be able to chime in too, just like a local.

Do you know any interesting or brand-new Japanese slang? Tell us in the comments. And don’t forget to share this with your friends!