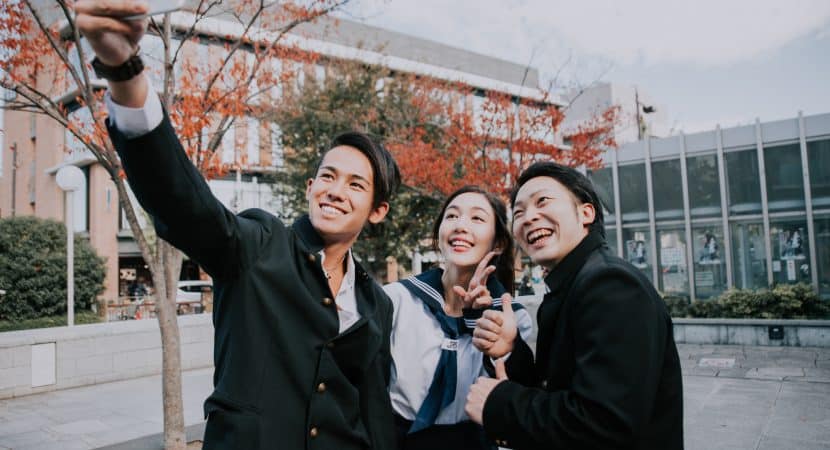 The generic word for friend in Japanese is 友人 (yuujin). Japanese people have many different ways to say the word friend. These words depend on how close the relationship is and with whom they are speaking. This article will discuss the words you can use to talk about your friend in Japanese.

Be aware that, unlike in other languages such as English, it isn’t common to refer directly to your friend with these words. They will typically be used to introduce them to other people.

Common Words for Friend in Japanese

Here are some general words for friend in Japanese. Be careful to note the level of politeness or intimacy in each!

The word 友達 (tomodachi) means friend or friends. The suffix -達 (dachi) is technically the Japanese plural form, but you can use tomodachi to refer to either one friend or many. However, these days, tomodachi has become more of a word meaning “one friend” instead of many. It is still not wrong to refer to many friends as your tomodachi though. It is even possible to add another “たち” to the end to make it clear that you are talking about many friends, like this: 友達たち (tomodachi-tachi).

Also, it recommended by 教育出版 (Kyoiku Shuppan) – a famous company in Japan that publishes educational materials) to write the 達 (tachi) in hiragana like this: 友たち (tomotachi) if you want to make it clear you are talking about more than one friend.

The word tomodachi is more casual than the previously mentioned yuujin.  Tomodachi is not a slang word, but it also isn’t polite or honorific Japanese. However, you can use tomodachi in everyday conversations with people you don’t know (store workers, people you just meet, etc.).

You can combine tomodachi with other words to express the type of friends you have:

You can also use 友達 to refer to anything that is your friend, even if they are not human (examples #3 and 4 below).

2. I went to the mall with my friends yesterday.
昨日、友達と一緒にモールに行った。
(Kinou, tomodachi to issho ni mooru ni itta.)

3. I became friends with a neighbor’s dog “Koro”.
僕は近所の犬のコロと友達になりました。
(Boku wa kinjo no inu no Koro to tomodachi ni narimashita.)

As mentioned at the beginning of this article, 友人 (yuujin) is the basic and polite way to say friend in Japanese. Translated, it means familiar/friendly person.

Yuujin is a “safe” way to say friend in Japanese because it’s polite—but not too polite. This means that you can use it with people in your inner circle and not come across as cold or aloof. However, it is more formal than tomodachi, which is why you would use 友人 (yuujin) when talking to your superiors (your boss, customers, etc.)

Unlike tomodachi, yuujin can only be used to refer to human friends.

In Japanese, the word 親友 (shinyuu) is reserved for close friends or friends who you’ve known for a long time. It derives from the same kanji as the adjective 親しい (shitashii), or intimate. You can also refer to a close friend as 親しい友達 (shitashii tomodachi) or 親しい友人 (shitashii yuujin) for the same effect.

Shinyuu has the same nuance as the English phrase best friend. You can make this word even stronger by saying 大親友 (daishinyuu), or very best friend.

1. Taro has been my best friend since childhood.
太郎は子供の頃からの親友です。
(Tarou wa kodomo no koro kara no shinyuu desu.)

A danger of learning Japanese only through manga or anime is that you might find misleading translations for words like 仲間 (nakama). Many media platforms translate nakama into “friend” or even “buddy.” In reality, the word has far less familiarity with its meaning.

In Japanese, nakama implies comradery, but not necessarily friendship. Your nakama could be a fellow player on your basketball team. They are your nakama whether you are close friends or not.

Of course, nakama does have a positive nuance. It would not be correct to refer to a teammate you dislike as nakama. However, it is a common mistake to refer to your bosom buddy or childhood friend as nakama. Use this word for friend with care.

The word 味方 (mikata) is also used often in Japanese media. It also suffers from some translation issues, probably because there is another word with the same pronunciation. 見方 (mikata) is also a common words, but notice that the kanji is different. This 見方 (mikata) means “viewpoint” or “the way you look at something.”

味方 (mikata) on the other hand means ally or partner in English. It is used to describe someone who shares the same group or circumstances that you do.

Like with nakama, you should avoid using the word mikata for people you don’t really like. It is still a far less endearing term than tomodachi or yuujin.

味方 (mikata) can also be used to talk about non-human things that are your friends or allies. (example #3 below)

1. Yoko took sides with me when the teacher got mad at me.
先生に怒られたとき、洋子さんは私の味方になってくれた。
(Sensei ni okorareta toki, Youko-san wa watashi no mikata ni natte kureta.)

Some words for friend in Japanese can only be used in certain situations or professional relationships. Here are some situation-specific ways to say friend.

相棒 (aibou) is a not really a common word for friend in Japanese, but it is used by some people—so long as you and that friend share the same goal or purpose and works towards it together. In certain situations, aibou can even be used to speak about a friend who is also your business partner. Detectives in Japanese dramas may also call each other aibou. This word is a bit friendlier than nakama but is in the same subgenre of meaning.

If you can read the kanji, you may be a little confused.  The kanji is comprised of 相 (ai, meaning mutual or each other) and 棒 (bou, meaning stick or rod).  What does a stick have to do with being friends?

The origin of the word aibou comes from 2 people who carried a basket (called “kago”) that was used to transport a person back in the olden days of Japan (possibly from before the Edo era, but it is not certain).  The pair of basket carriers (called “kago no mono”) called each other aibou.  You can read more about it here in Japanese:  The meaning of aibou (website in Japanese only).

If you are friends with a colleague or a close associate, 同僚 (douryou) would be a suitable word to use. 同 (dou) means “same” in Japanese and is used in many other terms. Because douryou implies a similarity between you and your friend, you wouldn’t be able to use the word for a friend in a different workplace or career than yourself.

Today, my coworker and I went to a ramen shop for our lunch break.
今日の昼休みに、同僚と一緒にラーメン屋さんへ行った。
(Kyou no hiruyasumi ni, douryou to issho ni raamen-ya san e itta.)

The word 同級生 (doukyuusei) is a way to say friend or peer in Japanese. It’s rooted in Japanese 先輩・後輩 (senpai/kouhai), or senior/junior culture. A doukyuusei is neither a senpai (senior) nor a kouhai (junior). They are someone who is right on level with you, either in age or in rank. Doukyuusei is most often used to refer to a friend who is also a classmate in the same grade.

Like any other language, Japanese has slang words. Here are a few popular slang terms for friend. Be sure not to use them with your boss or with your elders!

You may recognize the kanji in the word 友 (tomo). It’s the same as the first character in tomodachi, and the meaning is the same. Removing the suffix (-dachi) and just saying “tomo“ is a more casual way to say friend in Japanese.

However, this is only when you combine 友 (tomo) with other words. 友 (tomo) by itself is rarely used in daily conversations. It is mostly for written items like poems, songs, or song lyrics. Combining it with other words turns it into a common, conversational word. Some common ones are:

This is the same rule as with tomo but applied to the second half of tomodachi. Although it’s always written in katakana, ダチ (dachi) is the same 達 (dachi) in 友達 (tomodachi).

This is a very casual Japanese slang word. It’s an older term that might not be trendy in daily conversation but is sure to show up in TV dramas or anime. Dachi is also used between friends as a joke or an endearing tease. It is also masculine, so it is usually only used by men.

ツレ (tsure) is a Japanese slang word for friend used during social events. It derives from the word 連れ (tsure), or to bring. The implication is that this friend is your “plus one”—it can be romantic or platonic and can be used between husbands and wives.

I came with my wife, Misaki.
ツレは妻の美咲です。
(Tsure wa tsuma no Misaki desu.)

As it is a loan word, バディー (badii) is a very casual way to say partner or friend in Japanese. It isn’t a mainstream slang word anymore, but you can still hear it in a classic detective movie or read it in a manga.

There are various ways to say friend in Japanese, depending on your relationship with the friend or the company you find yourself in. If you’re in a pinch, the words yuujin and tomodachi are the most frequently used and are okay to use in most situations.