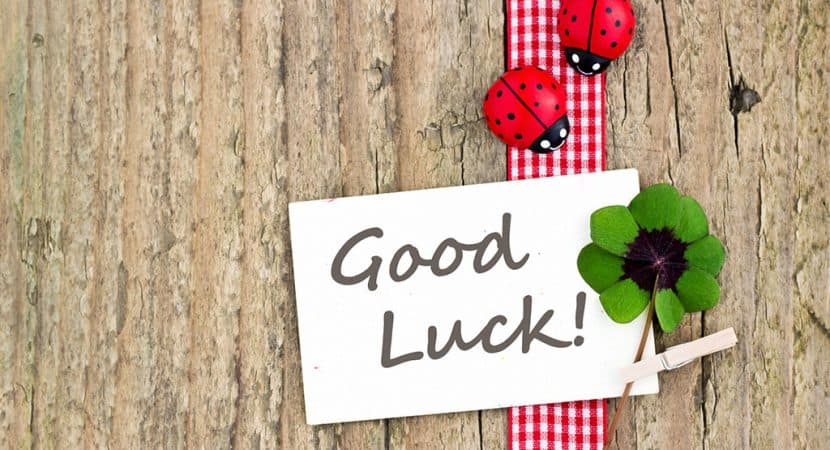 The most common way to wish someone good luck in Japanese is “頑張って(ね) (ganbatte (ne)).”

How Do You Say “Good Luck” in Japanese?

When wishing someone good luck, the exact translation in Japanese would be 幸運を祈ります (Kōun o inorimasu). But this phrase is not often used in our daily conversation.

In fact, it sounds a bit awkward if used. We’ll talk about this expression in more detail later in this article. But for now, let’s go over the most common and natural ways to say “good luck” in Japanese.

You’ll hear native Japanese speakers saying 頑張って! (ganbatte) a lot. While this is not a direct translation of “good luck,” it is the most natural and commonly used.

頑張って! (ganbatte) is used when you want to wish someone good luck for an upcoming event. This could be something important like an exam or a job interview, or a competition (sports, academic, etc.).

The verb 頑張る (ganbaru) means “to make a strenuous effort and to persevere.” By changing this to the te-form, 頑張って (ganbatte) becomes a casual request. It has a nuance of “Give it your all, okay?” A polite way to say this is 頑張ってください (ganbatte kudasai). This polite version is like saying “Please try your best” in English.

As you can see, these phrases are more for cheering a person on to keep fighting towards a goal. However, these phrases (especially 頑張って) can also be translated as “good luck.” This is because when you encourage someone, you wish them well and hope things go great for them. This “hope” that things will turn out great and wishing them well has the same nuance as saying “good luck” in English.

You can add the particle ね (ne) at the end of both phrases to make them sound more conversational, to emphasize the speaker’s feelings, or to seek agreement from a listener.

Let’s take a look at the differences below.

Different Ways To Use 頑張って (Ganbatte)

3. 頑張ってくださいね。
Ganbatte kudasai ne.
Please do your best. (I wish you well)

Please note that the meaning of 頑張って! (ganbatte!) can vary depending on the situation. As mentioned above, it can give off the nuance of “good luck” in English, but not always. It can convey so many different meanings like “try your best,” “fight!” or “don’t give up!”

頑張って (ganbatte) can even be used sarcastically. We’ll go into the sarcastic way of using 頑張って at the end of this article.

Not to get too sidetracked, but the meaning of the kanji characters of 頑張って is pretty cool. 頑 (gan) means “stubborn,” while 張 (ha) means “to stick” or “to affix.” So the kanji or 頑張って means “to be firm (to stick) in your stubbornness.”

If you would like to see how to use 頑張って (ganbatte) naturally in conversations, go to the end of this article.  We included two longer dialogues below to show you how this phrase is used naturally.

うまく (umaku) means something going or doing something “well,” and いく (iku) means “to go.” The conditional と (to) particle means “if something happens.” いい (ii) is a casual way of pronouncing 良い (yoi), meaning “good.” If we put it all together, this phrase means, “If things turn out well, it would be good.” Or, in simpler terms, “I hope things turn out well.”

2.  アルバイトの面接、うまくいくといいね。
(Arubaito no mensetsu umaku iku to ii ne.)
Good luck with the interview for arubaito.  (I hope you do well)

The example dialogue below shows how this expression can be used together with 頑張って (ganbatte).

敦子：準備は万端？
Atsuko: (Junbi wa bantan?)
Atsuko: Are you fully ready for it?

拓海：うん、準備はできてるけど、緊張するな～。でもお給料が上がるチャンスになるかも。
Takumi: (Un, junbi wa dekiteru kedo, kinchō suru nā. Demo okyūryō ga agaru chansu ni naru kamo.)
Takumi: Yes, I am ready for it, but I’m nervous. However, this might be my chance to get a raise.

健闘 (kentō) means “a good fight” or “to put a lot of effort into something.” 祈る (inoru) means “to pray.” This is an expression you say to someone when you want them to give it their all and show their ability to the fullest. This is a formal phrase, so it is not often used in casual situations.

For example, it can be used in semi-formal speeches before competitions like football or baseball games to encourage the athletes. You would also use this with people older than you or who have a higher social status than you (like your boss).

It also can be used in a business setting. You could say this to someone leaving your company to wish them a successful future (full of successful “battles”).

Because it sounds very formal and business-like, you probably wouldn’t say it to your friends or family, especially in casual situations. If using this phrase in very formal situations like a speech in front of your business partners or at a big event, it would be better to use the honorific form:

2.  今度の対戦相手はかなり強いそうですね。ご健闘をお祈りします!
(Kondo no taisen aite wa kanari tsuyoi sō desu ne. Gokentō o oinori itashimasu!)
I understand that the opponent this time is quite strong.  I wish you good luck!

This classical and even poetic expression is used to wish someone good luck. 幸 (sachi) is kun-yomi (Japanese reading) of the kanji. ～あれ (are) is a classic command form that is not used in daily conversation. It is used in song lyrics, congratulatory speeches, or formal writings. Sometimes 幸あれ (sachi are) is used as a catchphrase.

1.  新婚の二人に幸あれ！
(Shinkon no futari ni sachi are!)
Good luck to the newlyweds!

Other Japanese Words For Good Luck

While the words listed here mean “good luck,” they are intended to be used as expressions to describe types of luck. These words and phrases are not used to wish someone “good luck.”

運が良い/いい (un ga yoi/ii) means having good luck. This is an adjective to describe a person who has good luck. The opposite word of this is 運が悪い (un ga warui), which means “bad luck.”

運 (un) means something that happens that can’t be controlled by your efforts or abilities. So it can be translated as “fate” or “luck.” Japanese people generally don’t have strong beliefs in God or a divine creator, but many believe in a natural force that affects human activities. 運 (un) is considered a stroke of luck coming from this “natural force” or the heavens.

These expressions can be used to describe the luck of things like animals as well.

Here is a conversation between two girls who, by chance, bump into Brad Pitt on the street in Japan.

弥生：まぁまぁ、そんな日もあるよ。美味しいものでも食べて元気出そうよ。
Yayoi: (Māmā, sonna hi mo aru yo. Oishī mono demo tabete genki dasō yo.)
Yayoi: Well, there’s gonna be days like this. Why don’t you eat some delicious food to cheer up?

As mentioned at the beginning of this article, 幸運 (kōun) can be used to wish someone good luck by saying 幸運を祈ります (Kōun o inorimasu). This means, “I pray for your good luck.” However, this sounds very formal and is rarely, if ever, used in a daily conversation. It can be used naturally at special occasions like weddings, birthdays, in formal speeches, or in formal writing.

緑：すごい事故のことが報道されてたね。現場にいたんだって。
Midori: (Sugoi jiko no koto ga hōdō sareteta ne. Genba ni itan datte?)
Midori: I saw the big accident on the news. I heard that you were actually there.

正：そうなんだ。でも幸運なことに、巻き込まれなかった。あと1分遅かったら巻き込まれてた。
Tadashi: (Sō nanda. Demo kōun na koto ni, makikomare nakatta. Ato ippun osokattara, makikomareteta.)
Tadashi: Yes, but luckily, I wasn’t involved in it. That would have been me if I had gotten there one minute later.

This comes from the English word “lucky” and means the exact same thing. This word is a casual version of 幸運 (kōun) and is commonly used in daily conversation. This word can also be used to describe the luck of both humans and any living creatures.

由衣：でしょ? 道端で死にそうだったところを拾ったの。
Yui: (Desho? Michibata de shinisō datta tokoro o hirotta no.)
Yui: Right? When I found her, she was on the street, clinging to her life.

頑張って (Ganbatte): Wishing Someone Good Luck in a Bad Way?

At the beginning of this article, I mentioned that 頑張って(ね)! (ganbatte ne) is often used as a way to encourage someone. However, depending on the situation, 頑張って (ganbatte) can also sound sarcastic. It is like saying “good luck with that” in English to imply that you don’t think someone will succeed.

The expression せいぜい頑張って(ね/ください) (sēzē ganbatte ne/kudasai) originally had a positive meaning of “to do everything in your power” or “do your very best.” But with time, it started conveying more negative nuances, like “doing as much as you can (but still not good enough).” If someone says this to you, it can mean, “I know you can’t do it, but try your best anyway.”

So keep in mind that 頑張って has both positive and negative meanings.

Here is an example of how 頑張って can be used with sarcasm.

梢：なに、その言い方。
Kozue: (Nani, sono iikata.)
Kozue: How can you talk like that?

If you want to see more examples of how 頑張って (ganbatte) is used, take a look at these 2 example dialgues.

Here is a conversation between Ms. Yamada and her boss.

山田：部長、今までお世話になりました。これ、つまらないものですが*…部署の皆さんでお召し上がりください。
Yamada: (Buchō, ima made osewa ni narimashita. Kore, tsumaranai mono desu ga, busho no minasan de omeshiagari kudasai.)
Yamada: Mr. Sato, thank you for everything. This is nothing special, but please enjoy it with everyone in the department.

佐藤：気にしなくていいのに。それで、これからどうするの？
Satō: (Ki ni shinakute ii noni. Sore de, korekara dō suru no?)
Mr. Sato: You didn’t have to give us anything. So what are your plans?

山田：ありがとうございます。部長もお元気で頑張ってください**。
Yamada: (Arigatō gozaimasu. Buchō mo ogenki de ganbatte kudasai.)
Yamada: Thank you very much. You, too, take care of yourself.  I wish you the best.

*Note:  Ms. Yamada is giving a gift (probably sweets) to her boss, saying つまらないものですが (tsumaranai mono desu ga). This is a typical Japanese expression that shows the humbleness of the giver. つまらない (tsumaranai) means something “too ordinary” or “not nice.”

This phrase doesn’t mean that she thinks her gift is worthless. It is used to be humble, like saying “this isn’t anything special but,” or “it’s nothing much” in English. By saying this, you show respect to the person you give your gift to.

美鈴：何聴いてるの？
Misuzu: (Nani kiiteru no?)
Misuzu: What are you listening to?