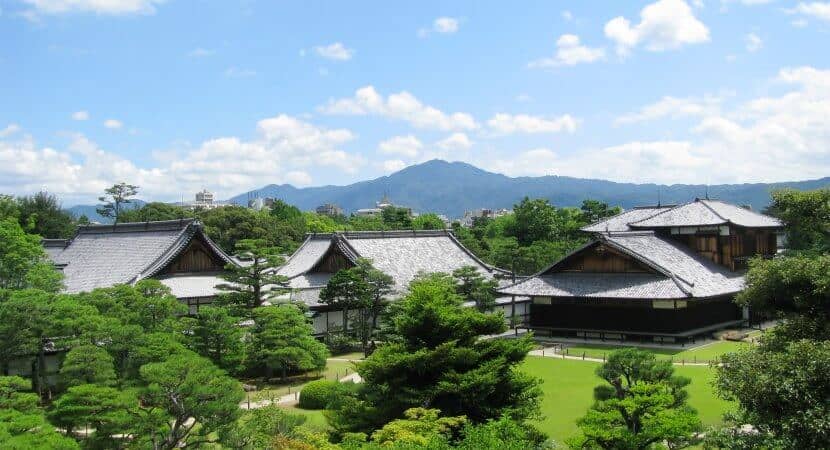 Niji Castle, also known as Nijo-jo, is nestled in Central Kyoto, hidden from passing pedestrians by its surrounding battlements.

What can be glimpsed from the outside resembles a temple rather than the Western image of a castle.

While you probably won’t spend hours here, the art and experiences you get from exploring the inside of this castle make it worth the trip.

With the towering Himeji Castle only a train-ride away, many tourists overlook Nijo-jo. This is a mistake.

As soon as you cross over the bridge, the mysterious carp dozing in the moat let you know that you’ve entered another world.

Nijo-jo, more than any other Japanese Castle, gives visitors a glimpse of what life was actually like living there.

What Can You See There?

The elaborate divisions of rooms according to one’s rank speak clearly to conditions of Kyoto in the lifetime of the castle’s owner, Tokugawa Ieyasu.

Amazing art decorates the sliding doors and walls of each room, with gold leaf and intricate wooden carvings adorning areas in the castle. Admired for their beauty and craftsmanship today, these sent a different message in Ieyasu’s time.

The castle’s interior decorations demonstrated the power and authority of the Tokugawa Shogunate.

The equally elaborate safety measures indicate a lot about Ieyasu’s state of mind as first Tokugawa shogun. The castle was built from funds demanded from Japan’s feudal lords, perhaps another reason its builder felt uneasy.

The castle’s security measures include rooms for bodyguards to hide in, secret doors to allow them to reach the shogun quickly in an emergency, wings which only female attendants could enter and the castle’s famous nightingale floors.

These floors were specially crafted so that the boards squeak when stepped on, imitating the song of a nightingale and giving ample warning of any intruders.

Other Attractions to See at Nijo-Jo

There’s more to Nijo-jo than just the castle. The grounds contain the remains of a five-story tower as well as two gardens and the Honmaru Palace, a former imperial residence. You can view the gardens and the palace exterior, but the interior is only open to the public on special occasions.

Tea-master Kobori Enshu designed Ninomaru’s palace garden, and it is well worth the visit. Kobori was as famous as a landscape architect as he was for his mastery in tea ceremony.

The gardens are less crowded than the castle, except during sakura season when the nearly 400 cherry trees become an added attraction. If you’re too early for sakura, Nijo-castle also has a plum orchard that is just as beautiful.

During the spring, to accompany the sakura, Nijo-castle grounds may remain open after dark and parts of the castle are illuminated. This also happens in July as part of the city’s Tanabata festival celebrations.

At these times, Nijo-castle can be crowded, with standing room only to see Ninomaru’s exterior lit up with an elaborate light display. The light display is free to view, and festival stalls are set up in the palace grounds.

It is closed from December 26th-January 4th for the New Year, and Tuesdays in January, July, August and December. If Tuesday is a national holiday, it is closed Wednesday instead.  For more information, go here.

Nijo-Jo is only a 15-20 minute bus ride from Kyoto station taking the City Bus numbers 9, 50 or 101 and getting off at Nijo-jo-mae, a short walk from the castle. The bus takes around 20 mintues from Kyoto station, and costs 230 yen each way.

Alternatively, you can take the Karasuma subway line to Kokusai-kaikan, transfer at Karasuma Oike station to the Tozai line for Uzumasa-Tenjingawa, and get off at the next stop, Nijojo-mae, where you have a seven minute walk to the castle.

Visitors to Nijo Castle are allowed to walk through part of the castle, so be prepared to remove your shoes and travel light.