Home
Places to Visit
Ōkōchi Sansō: A Garden of Beauty 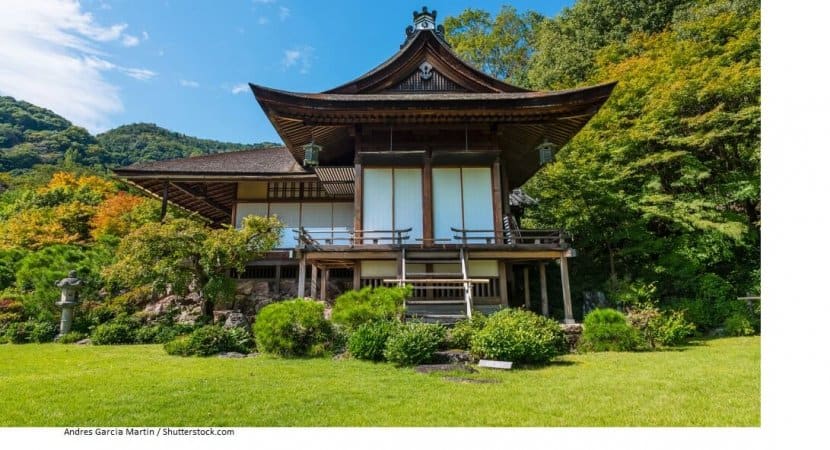 Kyoto is a top tourist destination in Japan, and one of the most stunning areas you can visit there is Arashiyama (Storm Mountain in English).  It’s only about an hour outside of central Kyoto by public transport, and well worth spending a whole day there.

As well as walking in the atmospheric woods and dropping in on the monkeys at the Monkey Park Iwatayama, another top spot worth seeing on Storm Mountain is the garden of Denjirô Ôkôchi.

A Brief History of Okochi Sanso

Born in 1898, Ôkôchi (whose real name was Masuo Obe) was one of the most famous actors of his day. He starred in many period dramas and is best known for his war movies and when he played traditional samurai roles. He is credited on over one-hundred-and-thirty projects, some of which are particularly intriguing.

In 1945 he starred in a controversial film called The Men Who Tread on the Tiger’s Tail which is about men from the Japanese military who disguise themselves as monks to get past an enemy border control. The film was banned and not released until 1952.

Ôkôchi was from Fukuoka in Kyushu, but fell in love with the Arashiyama area when he visited and bought a house set up in the peaceful hillside. The Ōkōchi Sansō garden has been preserved so that when you visit it today, it still looks the same as when Ôkôchi lived there.

If you want to see an amazing, traditional Japanese garden and escape the hustle and bustle of the city, Okochi Sanso is definitely worth a visit.

The best way to describe the gardens are immaculate – there doesn’t look a be a blade of grass out of place, and you can tell that this enchanting place was a labor of love for the actor. At twenty-thousand square meters, there is much to see in the garden.

It is an area of profound natural beauty, and the quiet Mount Ogura is surrounded by forests which are a vibrant splash of color against the blue sky.

Inside the garden, visitors can see some of the original buildings as well as enjoy the garden.

The tea house building was actually built in the Meiji period and then brought to the mountain later, but the other buildings in the villa were built in Ôkôchi’s time.

It is built on a hillside so as you follow the walking course around the garden, you will travel higher up the mountain and then back down again, seeing wonderful new views and perspectives as you go.

Aside from the flora, the garden also has a wonderful collection of traditional decorations such as “dry landscapes” (with the perfectly combed pebbles in waves and circles) and pieces of petrified rock.

When Ôkôchi died in 1962, the garden was opened to the public. Despite the fact that the garden is utterly gorgeous, it is not well known and isn’t crowded with visitors like other attractions.

One reason people are put off is probably the cost – at 1,000 Yen for adults (elementary school students enter for 500 Yen) it is a bit pricier than other similar attractions, but what you’re paying for is exclusivity.

We visited during a national holiday and yet saw only a few other people in the garden. If you’re in need of some relaxation, peace, and quiet, Ōkōchi Sansō is a lovely place to stop off and wander around in.

Using the Keifuku Dentetsu Arashiyama Line:  Get off at Arashiyama Station.  It’s a 15 – 20 minute walk from the station.

Using the JR Sagano Line:  Get off at Saga-Arashiyama Station.  It’s a 20-25 minute walk from the staton.

Take your time as you complete the loop – the pathways are narrow and winding, and if there are other guests coming up behind you, let them go ahead rather than being rushed on yourself as there is lots to see.

After you finish roaming around the course, you’ll end back near the entrance where you can enjoy a complimentary cup of green tea and a traditional Japanese sweet in the tea house.