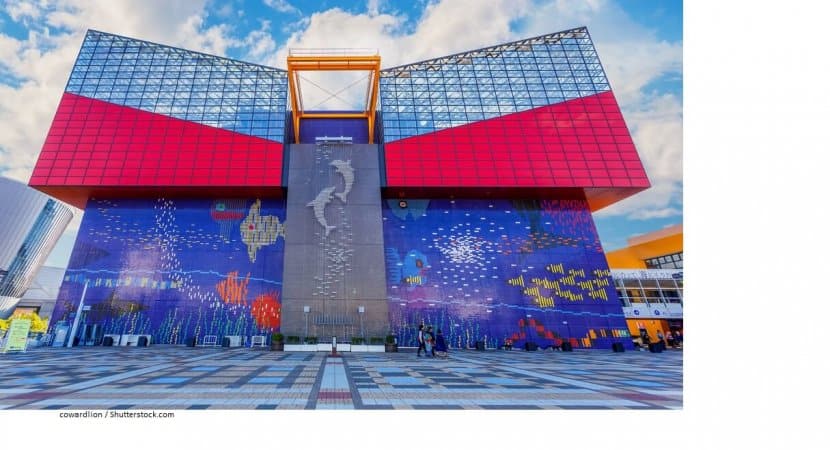 This is the crowning glory of the attraction – I’ll bet you’ve never seen a fish tank bigger anywhere else in your life. There is much to see besides this, and a visit to Kaiyukan is a top choice for visitors to Osaka.

A Video Tour of the Aquarium and Surrounding Area

Absolutely! As is always the case for aquariums, the tickets are a little pricey but in the case of Kaiyukan its totally worth it.

The aquarium is huge, and you could spend hours in there, not to mention visiting the cafe and gift shop and taking a stroll along a waterfront outside.

What Can You See There?

This is an aquarium unlike any other I’ve been to, and the creatures on show are so much more than just a bunch of randomly selected fish.

Each floor and section of the aquarium has been carefully put together and geographically themed, so that as you travel from floor to floor, it’s like taking a tour around the world.

Follow the suggested route to get the most out of your visit.

First, you will see the Aqua Gate which is the entrance to the exhibits – with rays swimming around over your head it is an impressive entrance indeed.

Take the elevator up to the eighth floor where you step out into an impressive jungle scene with rocks, trees and verdant bushes surrounding you. This is the Japan Forest zone, where the otter exhibit is most the popular attraction.

These playful creatures can be seen from the next floor down too – your first glimpse of the amazing multi-level design of the aquarium.

Travel down to the Aleutian Islands zone where you can see rainbow trout and red rock fish, and is next to the Monterey Bay zone. In this area, two types of seals can be seen ducking and diving into the water – a popular tank with small children when the seals come bobbing right up to the glass.

The next zones are the Gulf of Panama and the Ecuador Rain Forest areas, both of which contain mammals as well as fish. The lazy capybara can be seen sleeping at the waterside. Keep an eye out for the ring-tailed coatis in the branches over the pond.

Dolphins, penguins, and colorful fish are featured in the next few zones, but the most popular area has to be the Pacific Ocean zone.

Spanning three floors, this tank contains 5,400 tons of water and a host of sea life including hammerheads, white sharks, wrasse (brightly colored marine fish), giant rays and more. This tank is so large that it can be a bit of a challenge to see all the way to the other side of it.

However, you can follow it all the way down to the fourth floor, where you’ll have plenty of opportunities to view all of the creatures in this huge tank.

After this show stopper you’d think there isn’t much more to come, but think again. There is a special exhibit of fish native to the Seto Inland Sea, sea bream, lobster, anchovies, maomao, turtles, jellyfish, spider crabs, seals, and penguins.

Finally, there is a “touch and feel pool” where you can (gently!) get hands on and close up to mini sharks and rays.

This might seem like a rather mad collection of fish and sea creatures, but there is a method to the madness! One of the Kaiyukan slogans is “ring of fire, ring of life.” This quote is taken from Dr. James Lovelock who proposed the Gaia hypothesis.

This ring of fire is also known as the “pacific rim volcanic belt.” Everything on show at Kaiyukan are mammals and sea creatures which live along this belt, and are famed for their diversity.

Open from 10 am – 8 pm on most days, the aquarium is closed for a few days during January and February (check their website for exact details). Hours of operation are extended during busy seasons.

There are group discounts for international visitors (15 or more people) or groups of 20+ people for Japanese citizens.

The Aquarium is just a few minutes walk away from the Osakako subway station (Osaka City subway – Chuo line) and is roughly 35 minutes away from the central Shin-Osaka Station.

It’s highly recommended to avoid holidays and peak times. When the attraction is busy, it can be almost impossible to see the popular attractions because of the crowds. If you can, try to get there early in the morning or last thing in the evening to get a better view.