Home
Places to Visit
Tennoji Zoo Review: All You Need to Know 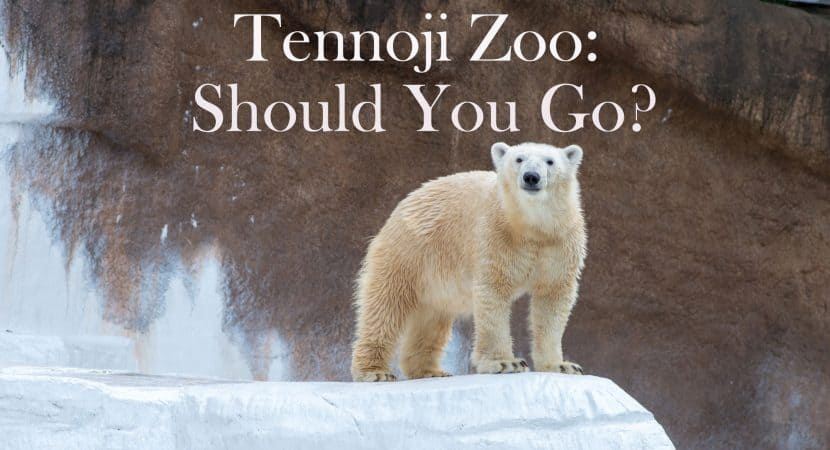 Families in the greater Osaka region love the place. It attracts 1.5 million visitors each year.

The zoo is inside Tennoji Park, and it opened in 1915. Its location in the park makes it worth consideration, especially for travelers with young families.

The zoo likes to educate its guests. They attempt to recreate the natural environments the animals have in the wild. They want to teach visitors about ecology and zoology.

Keep a few things in mind before you go.

Japan doesn’t have the best track record on animal rights. In fact, my worst experience in Japan was visiting a dog park. That’s why I’m always hesitant to recommend any zoos or sea parks in Japan.

Aquariums might be the only exception. Many Japanese aquariums are world-class. In particular, Osaka’s Kaiyukan Aquarium is great!

That said, Tennoji Zoo is working hard to improve the animal’s living conditions.

If animal welfare is a sensitive matter for you, I recommend reading the most up to date reviews of the zoo before visiting.

The African Savannah Zone occupies the Northern part of the park. It recreates an East African eco-system.

The Asian Rainforest Zone occupies the South. You’ll see lots of cool monkeys, birds, and bears here. The area also has the elephants and the polar bear – the two stars of the zoo!

You’ll find lots of smaller attractions in both areas. Both offer restaurants and other guest facilities.

The African Savannah Zone recreates an East African ecosystem. It opened in 2006.

All the enclosures appear to connect to each other. You might think it’s just one big exhibit.

Carnivores and herbivores live side by side as they are in the wild – or, at least, that’s what it looks like. The animals can’t get to the other exhibits. Hidden barriers stop the lions from chowing down on the zebras next door.

The Savannah Zone is called Nzabi National Park. Many features recreate the feeling of taking a tour through an African park.

The area has plants from East Africa. You’ll walk up and down rugged safari-like trails as you go from animal to animal.

You’ll also see things like a fake rhino skeleton. It makes it look like a rhino was eaten by predators. The zoo tries hard to make this area look and feel authentic.

To get the full experience, follow the observation trail as you go through the zone.

Animals You Can See in the Savannah Zone Include:

The More Unusual Species Include:

The Reptile House was the zoo’s first attempt to reproduce a natural habitat. Their success encouraged them to improve the living conditions for the other animals.

It’s somewhat less impressive these days, but you still get a chance to see animals you might not see very often.
For example – you’ll see lots of American and Chinese alligators. The reptile house also showcases Aldabra tortoises, Indian pythons, and the Japanese giant salamander.

The Hippo House was a milestone for Japan.

It was the country’s first ever transparent pool enclosure. You can watch what’s happening under the water from the observation area.

Visitors get a great view of the hippos frolicking around. You won’t believe how big they are until you see them up close!

You’ll see several other exhibits in the North End of the zoo.

The Exhibits in This Area Include:

You’ll see tigers, jaguars, pumas, and wolves in this area.

These are some of the saddest exhibits in the entire zoo. The animals pace back and forth with nothing to do. Many visitors have noticed they appear malnourished.

Animals to See at the Friendship Square

And Some More Unusual Species, Including:

You can buy pellets to feed to the sheep and goats for a small fee. It cost 100 yen for a decent-sized handful when I went.

Just as the Savannah Zone recreates an East African Park, this zone is modeled on a South-East Asian Rainforest.

The Asian elephants are the stars of the Rainforest Zone. Their enclosures allow them as much space to roam as possible.

For a while after the zoo’s existing elephants died, there were no elephants. The zoo created monuments to the elephants, and regular visitors placed tributes to the deceased elephants on them. Elephants have been once again restored to the Asian Tropical Rainforest zone, along with models of Burmese pythons and water monitors.

**Note:  There might not be any elephants once again, since the last elephant’s (Hiroko) death in January 25th 2018.

The Nocturnal Zone features animals who sleep during the day. It might make you feel like you just stepped into a cave!

It’s one of the few places outside of New Zealand you can see a kiwi. You’ll also see Egyptian bats and the Japanese Raccoon Dog (tanuki).

The more common species in the Nocturnal Zone include regular raccoons and koalas.

**Note:  Visitors have reported not seeing any koalas at the zoo anymore.

As suggested by its name, this area houses a wide variety of primates. You can see everything from Tufted Capuchins, to Black-and-White Ruffled Lemurs, lion-tailed macaques, mandrills, and gibbons.

Surprisingly, there are no Japanese monkey species represented here. Maybe these are considered too common?

The Shika deer exhibit sits right next to the monkey house.

If you’ve only encountered these deer roaming around Nara and Miyajima trying to eat your map, you probably didn’t realize there are several different sub-species.

You can learn more about them here at the deer exhibit.

Aviary Zone and the Surrounding Area

Stretching along the zoo’s Southern border, the Aviary Zone focuses on birds.

It’s also home to one of the Zoo’s most popular animals: the polar bear.

The Polar Bear might be the most popular animal in the whole zoo.

She gave birth back in 2014. It was quite the event; the cub gave the zoo a huge publicity boost.

You can see storks, three species of ducks, and egrets in the aviary.

You’ll also see pelicans, swans, sea lions (not a bird, but they were going with an aquatic theme), and owls.

There’s also a pheasant house with two types of pheasants. Two varieties of colorful tragopans, guineafowl, and kookaburra live in the pheasant house as well.

The bear house features the Japanese Black Bear alongside two other less common species: the Malayan Sun Bear and the Spectacled Bear. The Polar Bear is the most popular. Hopefully, her habitat is next to be upgraded. The current attempt at recreating her habitat is concrete painted to resemble ice.

The Malayan sun bear has a distinctive yellow snout. She has a dark body with a light orangish-yellow face.

The shaggy spectacled bear looks quite unusual as well. His long hair and brindle snout makes him look like a cross between a dog and a bear.

It’s not every day you see bears like this. I thoroughly enjoyed the exhibit.

Is the Tennoji Zoo Worth Visiting?

It’s only worth visiting if you have young, not particularly aware children and can’t find anything else for them to do.

Tennoji Zoo is showing its age, and the overwhelming impression is depressing.

The atmosphere gets even grimmer during the winter. The African animals, in particular, look miserable in the cold weather. Their open-air enclosures don’t provide much shelter from the elements.

If you care about animals at all – skip the zoo. You’ll only make yourself feel bad if you go.

*Note: Most exhibits close a half-hour to an hour before the zoo closes.

Visit the zoo well before closing time to make sure you don’t miss out.

Discounts are available for visitors with disabilities.

Getting to Tennoji Zoo

The zoo is part of the Tennoji/Shinsekai sightseeing area.

You can walk to the zoo from several subway and train stations.

Dobutsuen-Mae means “in front of the zoo.”

It’s the closest station to the main entrance. You’ll see animal silhouettes decorating the station walls when you arrive.

Following the signs (in English, although the animals pictures give it away) to the zoo. It’s about a 5-minute walk.

You can reach the station on the Osaka Loop Line, Hanwa Line, and Yamatoji Line. Through the connecting subway station, you can also reach it on the Midosuji and Tanimachi lines as well.

Exit through the Tennoji-Koen Entrance and enter Tennoji Park (no ticket needed).

Walk straight ahead. Follow the signs for the zoo.

You’ll reach the Ten-Shiba Gate in about 5 minutes. It leads you right into the Aviary Zone.

You can reach the station on the Osaka Loop Line or Yamatoji Line.

Walk in the direction of Tennoji Park/toward the big underpass. Mega Don Quijote should be on your left.

Turn left at the first traffic light. Walk straight until you spot the zoo entrance on the right.

From Ebisucho Station, take exit 3 and walk towards Tsutenkaku Tower, which is immediately visible.

Turn left at the tower and follow the road around the building. Keep walking until the road ends.

Turn left again. Continue straight until you come to the park. You’ll see the zoo entrance down the road to the right.

Have You Been to the Tennoji Zoo in Osaka?

What did you think of the place? Did your kids have a good time? How did the animals look? Please let us know in the comments – we’d love to hear what you think!