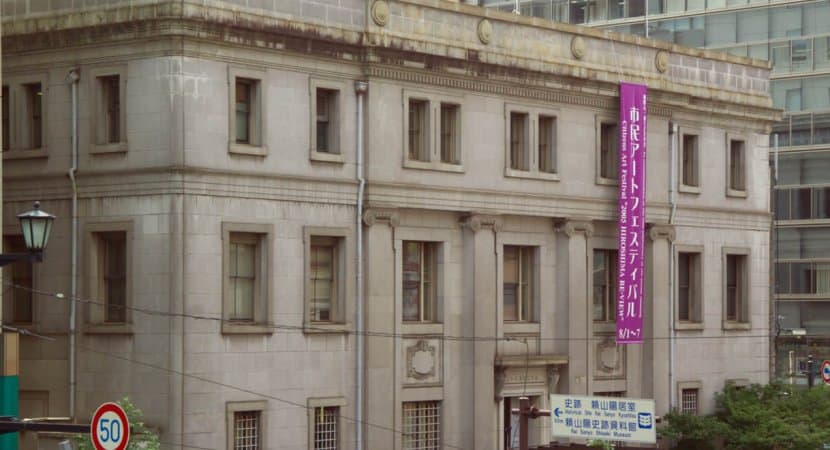 Most people that go to Hiroshima have plans to visit Peace Park and Museum. Why would you go to The Former Bank of Japan in Hiroshima?

Standing only 380 meters away from where the atomic bomb blast went off, it survived and still holds strong today.

From the outside, the stone facade doesn’t look too much different from other Japanese banks. However, this building is now a memorial.

At the time of the atomic blast, the bank was in operation. The building survived the blast relatively intact and became a field hospital.

Today, it is open to the public as a museum and gallery. The first-floor display changes frequently and varies from artwork relating to peace made by school children to the recreation of the Edo-period house in which a famous author grew up in.

On the second floor, the wooden walls of the director’s office show scratches caused by the bank’s glass windows being blown in during the blast. In the bank’s basement, you can see where the blast warped the metal doors of the bank’s vault.

The Former Bank of Japan in Hiroshima is worth visiting if you have time to spare.  While it is a chilling, yet interesting site to see, the Memorial Peace Park and Museum should be your priority.  If you already visited those places, then going to the Formal Bank of Japan while you’re walking through Hondori might be a good choice.

From JR Hiroshima Station, head to the Hiroshima Tram Stop. Its about a 5 minute walk and is in front of the JR Hiroshima station.

Take the Hiroshima Electric Railway No.1 headed for “Hiroshima Port (Ujina).” Get off at the “Fukuro-machi” station. Its about a 15 minute ride and costs 160 yen each way.

The shopping arcade in Hondori is also about a 10 minute walk from the Hiroshima Peace Memorial Park.

Taking Rijo-dori (Rijo Street) a couple of blocks south of Hondori brings you to the Old Bank of Japan Hiroshima branch building.

For more information, check out this article here.